These adorable teacakes are one of the results of my foray into lilac/sugar recipes. They’re tiny vanilla/lemon cupcakes frosted with a glaze made from powdered sugar and lilac syrup, topped with candied lilac blossoms! So springy!

I will note, though, that my first attempt (involving pulverizing lilac blossoms into the sugar before using it in the batter) didn’t turn out all that well– honestly, I think the lilac flavor needs something to play off of to avoid tasting like soap. So I tweaked things a bit, and here’s an improved version:

END_OF_DOCUMENT_TOKEN_TO_BE_REPLACED

Yet another treat I served at my daughter’s woodland creature party was a selection of woodland creature cookies– foxes, hedgehogs, and squirrels. I used my classic chocolate cutout recipe for the cookies, and frosted them with a 3/4-sized batch of a hybrid glaze/royal icing that I picked up online from Baking Sweet Hope. It’s a nice combination of the best of both icing worlds, and I had just about the right amount of icing to cover my cookies in several different colors without worrying about running short.

The original icing tutorial and recipe are both so good that I’m not going to try to summarize them here– just go check out her page!

I did make a few mistakes in the icing process– first, I think I thinned the icing too much, which prevented me from getting quite the amount of detail I’d wanted. I also tried to do too many cookies at once (at least on the foxes), assembly-line style, which messed with my details a bit as well. But in general I think the animals turned out well, and they tasted great! I admit that the hedgehogs were my favorite of the lot– which ones are your favorites?

After a recent trip to Montreal I wanted to bake something as a thank-you for our catsitter– after spending time surrounded by images of maple leaves, a maple cake seemed like the perfect gift!

I wanted to be mindful of potential nut allergies, so I looked for a recipe without pecans or walnuts, both of which were very common pairings with maple syrup. I ended up with a recipe from King Arthur Flour that was billed as a pound cake, but which was ultimately too light and delicate to really count as a pound cake in my opinion. That being said, the texture of the cake was perfect for a layer cake, and I will absolutely be trying to figure out how to replicate it (without the use of maple syrup) for future adventures! Can I just note that the batter smelled amazing while baking? I’d be tempted to make this just to make my house smell good… and the finished cake was buttery and maple-y, very reminiscent of pancakes with syrup (in a good way). I sprinkled a touch of kosher salt on top, just to emphasize the sweet-salty combination.

I wanted to make a pretty bundt cake, but also wanted to make another cake to eat at home since I can never give something away without taste-testing first! I doubled the recipe to make an 8-cup bundt as well as a loaf cake. (quantities below are for a single recipe) Sadly, the bundt cake refused to release cleanly from the pan and it literally fell apart on me, so it was in no condition for gifting– we’ve been eating it out of the pan with a spoon, and it’s delicious that way too! Luckily I’d lined my loaf pan with a parchment sling, so the loaf was much easier to lift out in one piece!

END_OF_DOCUMENT_TOKEN_TO_BE_REPLACED

So remember the Parry Gripp birthday party? To go with the theme we made themed cookies– Neon Pegasus and Space Unicorn. 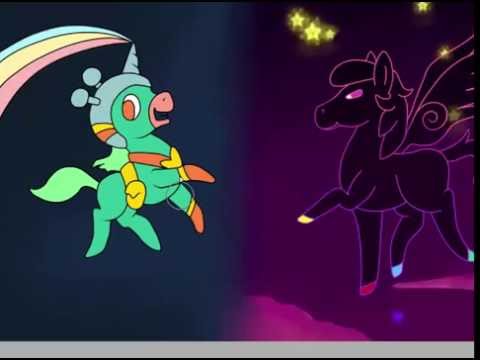 I used the same cutter for both– a unicorn cutter– and made a few adjustments for the pegasus cookies, cutting off the horn and adding a wedge-shaped piece of dough for a wing. My standard chocolate cutout recipe worked out fine– the slight spreading made the cookies less prone to breakage anyway.

I mixed up a batch of glaze icing to decorate with, separating out a portion to stir in some cocoa and black food coloring to make the dark chocolate glaze for the pegasus cookies. The rest got tinted in small batches to make all of the colors. A single batch of glaze icing was enough to cover 28 cookies with some to spare.

I accented the icing with some edible glitter– also for the space unicorn helmets I mixed some silver luster dust with vodka and painted them for some extra shimmer.

These weren’t perfect replicas, and the piping wasn’t the neatest, but they were at least recognizable and pretty cute!

The other day I was reading my daughter a bedtime story that had a particularly tasty-sounding description of brunch, featuring fluffy omelettes and sugar-dusted donuts. For some reason the latter caught her attention, and before I knew it I was promising to make sugar-dusted donuts of our very own!

Of course, I really don’t like the hassle of deep-frying, but I find baked cake-style donuts to be not particularly donut-y, so I searched the internet for a recipe for yeast-raised baked donuts. Preferably with a minimum of kneading, because I didn’t want to have to break out the stand mixer. Eventually I found one that looked pretty good— it had a two-stage rise, one at room temp and one overnight in the fridge, and could be baked up in the morning. Reviews were decent. So I gave it a shot.

END_OF_DOCUMENT_TOKEN_TO_BE_REPLACED

Every year for Thanksgiving, we go to my aunt’s house for Thanksgiving dinner– and every year, I bring some kind of baked good to share. Over the years, I’ve developed some criteria to maximize people’s enjoyment of my creation: It has to keep well at room temperature, because the fridge is full already. It has to be easy and neat to eat, so people don’t have to get out plates or forks to get a piece. And it has to be a cake or loaf of some kind (rather than individually-portioned cookies, etc.) because while people are sometimes reluctant to grab an entire cookie or cupcake between meals, they’re always happy to slice off just a teeny-weeny bit to snack on as they pass by.

This bundt cake is perfect for the occasion– it’s got a dense, fine crumb that lets it hold together well when people pick up a slice, it’s not so sweet or decadent that people feel guilty about grabbing some, and it’s appropriately festive, being chock-full of cranberries and pecans. And yes, the flavor combination may sound familiar from my Cranberry-Orange Walnut Muffin recipe, but this cake is a lot richer and denser than the light, fluffy muffins, making it just the right dessert for a family event.

END_OF_DOCUMENT_TOKEN_TO_BE_REPLACED

I blame Target for this cake. Which may not be a bad thing, but I’m going to go ahead and use the word “blame” because I’m still not happy with Target for ceasing to carry my favorite yogurt, Dannon Light n’ Fit Vanilla Greek yogurt. I’d never had it before the Target store opened down the street from my house, but once I tried it I was hooked. I was having it for breakfast daily, and it was sweet and dessert-y enough that I was planning on swirling it with some fruit purée and freezing it into popsicles at some point, when suddenly Target stopped carrying it! The travesty!

Instead, the only nonfat vanilla Greek yogurt I could find was what appeared to be Target’s store brand, Simply Balanced. Willing to forgive (if not forget), I picked up a carton to give it a try.

I was not impressed. Neither as sweet as the Dannon, nor as tangy as regular Greek yogurt, this stuff was just bland, with a distinct aftertaste of what can only be described as “barnyard.” Seriously, this was not something I’d be eating more of on its own– I didn’t even want to think about finishing the container.

What’s a girl to do in this situation? Bake cake, of course. Yogurt cake. Orange yogurt cake, to use up some extra orange juice from a recent brunch party. A big one that would use up as much of that blasted yogurt as possible.

END_OF_DOCUMENT_TOKEN_TO_BE_REPLACED

Adding another dessert to the list of “summer BBQ contributions,” here’s a batch of dark chocolate brownies, topped with a layer of chocolate and a colorful surprise!

I shamelessly stole… er, adapted this idea from Ruthanne at EasyBaked, as it was so neat-looking I had to try it! Since I was going for fun and pretty rather than gourmet I subbed in a doctored-up boxed brownie mix for her brownie base, but I kept the topping recipes the same. I doubled the recipe to fit a 9×13″ pan, since I was going to be feeding a crowd, and changed up the stripe pattern to be sure that my brownie squares would be just as pretty as her tart slices.

END_OF_DOCUMENT_TOKEN_TO_BE_REPLACED

Instead of hosting a Christmas party this year, we decided that it would be simpler and therefore more fun to host a post-Christmas brunch. For some reason a brunch just seems less stressful than a full evening party– maybe it’s the fact that the foods are easier to prepare, maybe it just seems more casual… in any case, that’s what we decided to do. Of course, “casual” doesn’t mean “starving,” so of course I had to come up with an appropriate selection of sweet and savory goodies. And one of the first things I knew I’d be making was monkey bread.

END_OF_DOCUMENT_TOKEN_TO_BE_REPLACED

Remember all of the candied lemon peel I had left over from my lemonade concentrate? I had to do something with it, so I decided to bake cake. Cake is always the answer. I decided to go with a pound cake, because I figured that the crumb would need to be fairly dense in order to support the chewy chunks of peel. And what’s a lemon cake without a lemon syrup to soak it in? And a glaze? Talk about gilding the lily…

The finished cake is incredibly moist and tender, and the syrup and glaze combine for a slightly crackly outer crust that immediately gives way to a melt-in-your-mouth icing, full of lemon flavor. While the cake doesn’t slice neatly– too soft and moist– it’s really delicious, and even better the day after it’s baked. Plus, due to the moisture and the glaze it’ll keep,  uncovered at room temperature, for at least three days without drying out. Probably longer, but I didn’t have any left to check after three days!