Lately one of my favorite lunches has been a simplified variation on this egg and rice bowl from Smitten Kitchen— I love the refreshing combination of rice with lightly pickled vegetables and punchy vinaigrette, but I often don’t have the patience to crisp the rice or freshly fry an egg. Enter the soy sauce egg– I discovered it one day and had to try it, and once I did, it earned a permanent place in my lunch rotation.

What is a soy sauce egg? It’s an egg that’s been boiled to medium-hard (with a soft, jammy center, not a runny or crumbly one) and then marinated in a sweet/salty sauce to give it extra flavor. It’s the perfect accompaniment to the veggie-heavy rice bowl and gives a little heft and protein to my lunch!

END_OF_DOCUMENT_TOKEN_TO_BE_REPLACED

I’ve made cream puffs on this blog before, but while they’ve been light and puffy and filled with delectable cream, they’ve never been what I would call “pretty.” I’ve come to the conclusion that my standard choux recipe is just a tad too thick– not eggy enough– and that’s making the piped choux blobs slightly irregular in shape, which translates to unevenly-puffed cream puffs. I’ve decided to adapt my recipe to add a bit more egg, and to add an extra layer of protection– a craquelin.

A craquelin topping is a circle of sugar-butter dough that you put onto the unbaked choux. As the choux bakes, the craquelin cooks over the top, expanding with the choux and creating an uneven, crunchy, sugary top that adds texture to the puff as a whole. Also, I figured that having something on top of the choux would help even out the rise in the oven.

END_OF_DOCUMENT_TOKEN_TO_BE_REPLACED 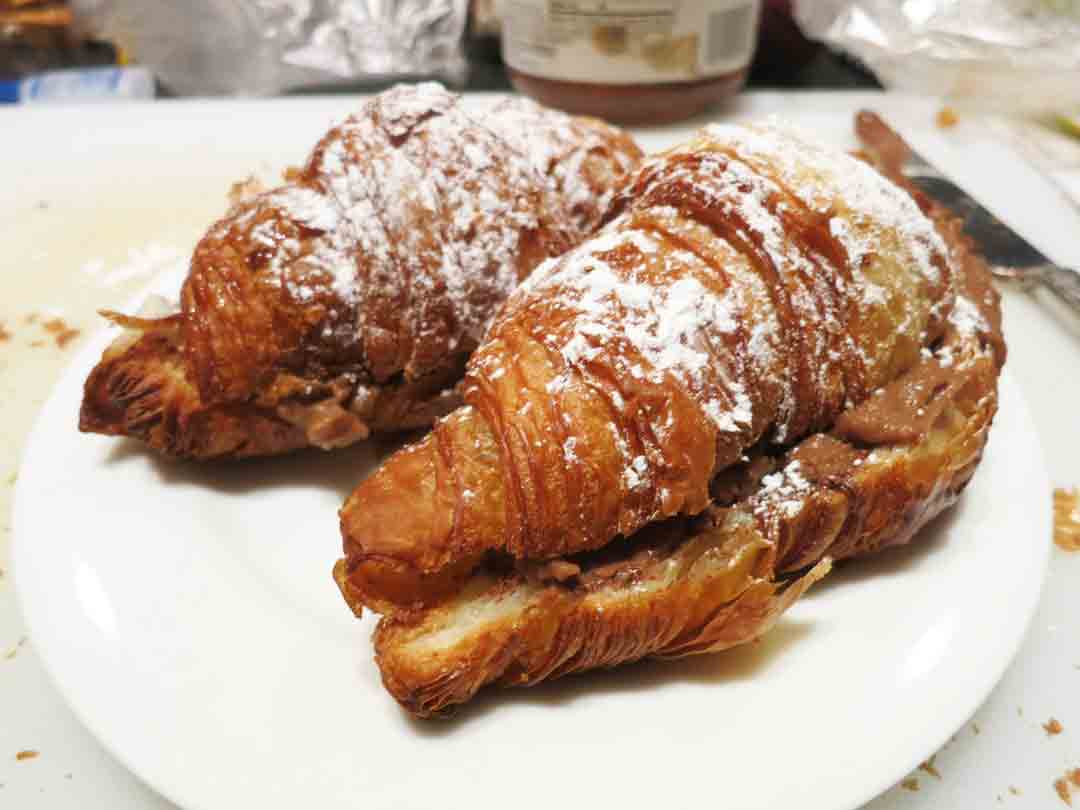 The other day, my husband (by way of gloating) mentioned an amazing treat he’d had at a lunch out that he had– so sad– failed to save any of for me. It was apparently a fresh croissant, split and filled with Nutella and chocolate pastry cream. He gleefully described how he’d tried to save half, but then couldn’t resist eating just one more bite, and then another, and then another… until it was gone. I think he enjoys torturing me like this.

Not one to admit defeat, I promptly decided that I would make my own– so there! Croissants, of course, are easy to come by, and our pantry always has Nutella in it, but pastry cream isn’t something I generally just whip up. It’s so fussy, what with using only egg yolks, whisking constantly, etc., that I rarely make it.

Then it occurred to me that I had already solved this problem with regard to lemon curd– and my whole-egg microwaved lemon curd recipe is one of my favorites. Why not try the same thing with pastry cream? I found a basic whole-egg recipe online and used the same technique I’d applied to the lemon curd (though going to a higher heat due to ingredients), stirring in melted semisweet chocolate at the end. And what do you know? It was reasonably good. The texture was just a bit grainy– I think I overcooked the eggs just a tiny bit– and it wasn’t quite as rich as I’d hoped. Next time I might add an extra yolk to the eggs, or use half-and-half instead of milk. Or I guess I could just cook it on the stovetop where I’d have more control over the heat distribution.

But in any case, it’s a perfectly serviceable chocolate pastry cream if you’re short on time and want to make a point about sharing desserts. 😉

END_OF_DOCUMENT_TOKEN_TO_BE_REPLACED 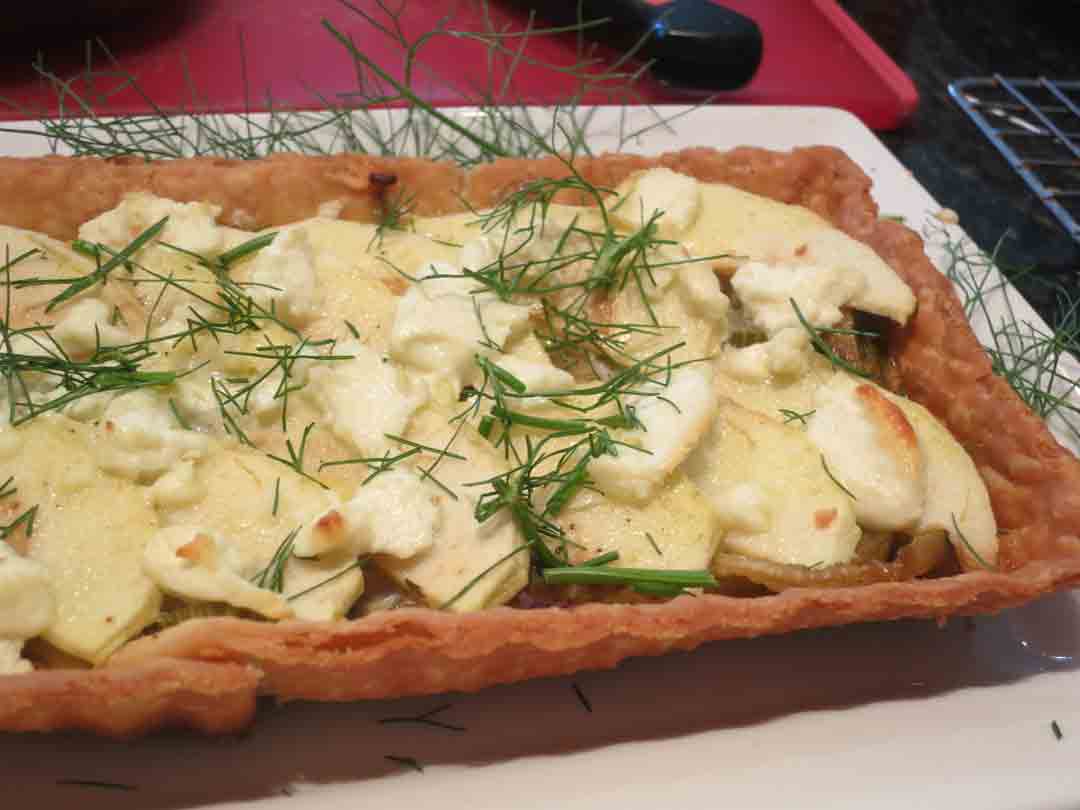 END_OF_DOCUMENT_TOKEN_TO_BE_REPLACED

I didn’t really grow up eating bread pudding on a regular basis. I think my dad made it a few times– cubed bread, soaked in a cinnamon-laced egg-and-milk mixture, with some raisins thrown in. It was reasonably good whether hot or cold, but it was admittedly somewhat lacking in… something. There was no pop of flavor or texture to make it stand out. Later, once I tried pumpkin bread pudding, chocolate bread pudding, and even savory spinach-and-gouda bread pudding, I grew to love it and to try seeking out new variations on the theme. Because really, what could be easier than cutting up some stale bread, tossing in some extras, soaking it in custard, and sticking it in the oven?

The other day I realized that I’d inadvertently let a half-baguette go stale (usually I slice it up and freeze it before it gets to that point), and decided to make some use out of it. Going through my refrigerator for add-in options, I came across a small jar of clementine marmalade that I hadn’t used in a while and decided to give it a try as a flavor booster for “bread and butter pudding.”

END_OF_DOCUMENT_TOKEN_TO_BE_REPLACED

Emily’s Runaway Imagination is one of Beverly Cleary’s lesser-known works, and it takes place on a farm in the 1920s or thereabouts. One of the scenes I remember best is where Emily (a little girl with a big imagination) bakes custard pie for a church potluck. She’d previously overheard someone say that the secret to a light and flaky pie crust was adding “a generous pinch of baking powder” to it, and she’s eager to demonstrate her newfound pie crust prowess.

“Two and a half cups of flour,” directed Mama. “Some salt — not quite a teaspoonful. Let’s see, some lard. You’d better let me measure that.” Mama came into the pantry and deftly measured the lard out of the lard bucket. “Now Emily, take two knives and slash through the flour and lard until it is as fine as corn meal.” Emily started to slash. […]
Quickly Emily added a generous pinch of baking powder and then, not certain how big a generous pinch should be, added another generous pinch to make sure. Then she slashed and slashed and according to Mama’s directions, added water, just a little bit. “There are two secrets to making good pie crust,” said Mama. “Use very little water and handle the dough lightly.” Emily smiled to herself because she knew a third secret.

Unfortunately for Emily, once the pies come out of the oven, instead of the custard surface being “golden yellow and flecked with nutmeg,” the crust has risen to the top with the custard at the bottom. Her mother concludes that the custard filling was too liquidy to weigh the crust down (apples or raisins would apparently have worked better). No one wants to eat her “funny-looking” pie, until one of her neighbors remarks that the inversion will keep the crust from getting soggy… and then everyone digs in.

I always wondered as a kid if this would really happen if you added baking powder to a custard pie crust. Thinking about it now it doesn’t really make sense, since the custard would have no way of getting down through the bottom of the crust unless the crust had holes in it to let the custard flow through– without the holes even the puffiest crust would just end up pushing the extra custard over the top of the pan to spill on the oven floor. I could dock the crust, of course, but no one would dock a crust with big enough holes to let custard get through in any quantity– that’s just asking for the custard to leak and stick the crust to the pan.

I decided to give this food myth (if one can really call it that) the best possible chance of success by cutting a few 1″ circles out of the pie crust, allowing the custard plenty of space to run through and let the crust rise up to the top. I figured that if that didn’t work, nothing would.

END_OF_DOCUMENT_TOKEN_TO_BE_REPLACED 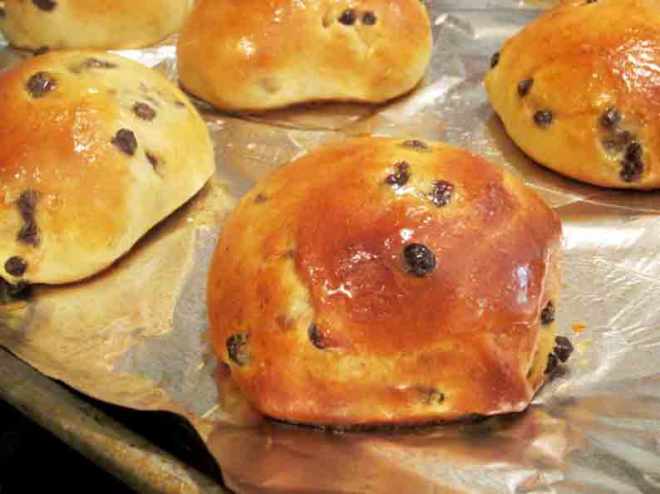 I’ve already mentioned my love for Frances Hodgson Burnett’s A Little Princess— quite apart from the doll reference, Sara was a character I could relate to (at least in some respects), always telling stories and imagining things.

There are several references to food in the book– rich, savory soups, hot muffins, sandwiches, cakes– but the most prominent takes place when Sara is out on a cold winter day. Tired, cold, and extremely hungry, she daydreams about being able to buy some hot buns, when suddenly she happens upon a lost four-penny piece!

And then, if you will believe me, she looked straight at the shop directly facing her. And it was a baker’s shop, and a cheerful, stout, motherly woman with rosy cheeks was putting into the window a tray of delicious newly baked hot buns, fresh from the oven—large, plump, shiny buns, with currants in them.

As a child, I didn’t really know what currants were, but “large, plump, shiny buns” sounded delicious. I figured that these buns would be lightly sweet, studded with rehydrated dried currants, with a shiny egg wash and perhaps even a light sugar glaze over the top.

END_OF_DOCUMENT_TOKEN_TO_BE_REPLACED

It's All Frosting…
Blog at WordPress.com.