The other day I was offered some homemade caramel sauce by a friend. Not being an idiot, I of course took her up on her offer, but that left me with the dilemma of what to eat it with! While I was tempted to just get a spoon and dive in, I decided to kill two (three?) birds with one stone and try out a recipe for banana strudel, which would also utilize the rapidly browning bananas on my counter and the half-package of phyllo in my freezer. (I would also have been able to use up the heels of a loaf of sandwich bread, but when I got them out they had already started to get spots of mold, so I threw those out and had to use fresh sandwich bread instead.)

This strudel couldn’t be easier to make– you just toast up some fresh breadcrumbs, add cinnamon and chopped nuts (I used walnuts but pecans or hazelnuts would also be nice), and roll it all up in some phyllo dough. For the record, a package of Pepperidge Farm brand phyllo has two sealed rolls of 20 small sheets each, so I made four strudels with my half-package, which was perfect. (also, if you work quickly you don’t have to bother covering the phyllo with a damp towel in between rolls)

I was originally wary about the lack of sugar in the filling, but the bananas turned out plenty sweet enough on their own– plus the caramel sauce took them over the top, so I had no cause to complain. The sauce really was necessary to add some moisture to the phyllo, which was extremely crispy and therefore just a touch dry– I think in apple strudel the juice from the apples softens the phyllo, which was not the case with my bananas. If I were to do this again I’d consider making a honey syrup to pour over the strudels while hot, like baklava– but then I wouldn’t be able to eat it for breakfast like I did the next morning (at least not without guilt)!

END_OF_DOCUMENT_TOKEN_TO_BE_REPLACED

Is there anything more decadent in the morning than a warm, gooey cinnamon roll? With a soft, plushy crumb, spicy-sweet interior, and layer of cream cheese frosting slowly melting over it all, cinnamon rolls are the ultimate breakfast luxury. And let me just say that these are the best cinnamon rolls I’ve ever made. To be fair, I’ve only made cinnamon rolls a few times in general, but these were so good that I’m not only going to stop looking for other recipes, but I’m going to start making these more often. You can’t get a better endorsement than that!

I always start making these the night before, so that the next morning all I have to do is let them sit on the counter for a while before putting them in the oven to bake. They make the kitchen smell amazing, which is an added bonus. I will note that the thing that sets these apart from other cinnamon rolls is the extra heavy cream– you pour it over the risen rolls just before baking, and it mingles with the cinnamon and sugar to make this incredible gooey finish that takes the recipe over the top.

END_OF_DOCUMENT_TOKEN_TO_BE_REPLACED

Back at the end of June we went out to pick the last of the juneberries– there were masses of them, dark purple and heavy on the tree, so we filled our bucket and decided to freeze them for future use. After washing them and picking out the stems, I spread them in a single layer on a paper-towel-lined baking sheet and froze them overnight. Then it was time to decide what to do with them!

We decided on muffins, figuring that we could treat the juneberries much like blueberries, and went with the Cook’s Illustrated “Best Blueberry Muffins” recipe, which involves a combination of fresh berries and berry compote. Since we already had a stash of juneberry jam we used that instead of the compote. You can use blueberries instead!

END_OF_DOCUMENT_TOKEN_TO_BE_REPLACED 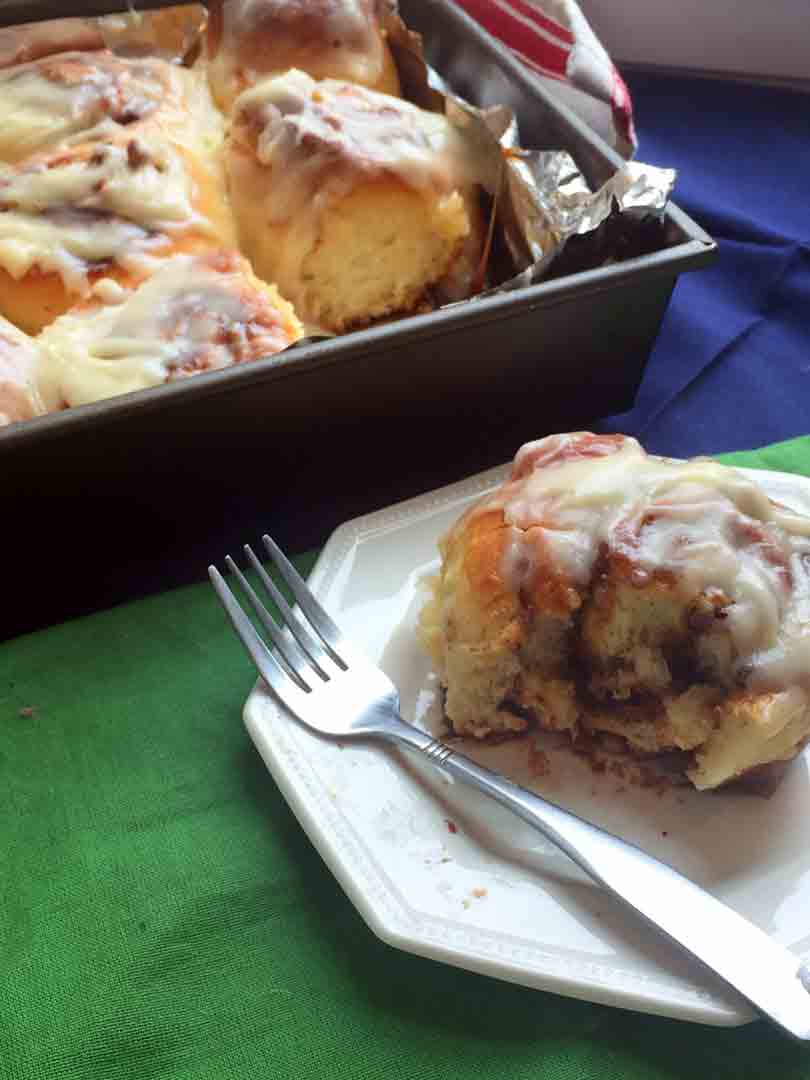 If there’s any cooking scent more delectable and homey than freshly-baked bread, it has to be warm cinnamon– so it’s no surprise that cinnamon rolls are the ultimate when it comes to comforting (and mouth-watering) odors. When I decided to make these I was only thinking about the gooey and delicious breakfast that awaited me, but let me just say, the smell of the baking rolls was almost as good!

The finished rolls were soft and delicious, though be careful about overbaking– I left them in a bit longer than I should have in hopes of getting more browning on top, but that made the bottoms caramelize in the sticky leaked-out sugar filling, leading to chewy caramel that stuck to my teeth. Other than that, though, they were excellent!

If you have any leftover from the initial devouring, be sure to microwave leftovers briefly to soften them up again– they’re so much better warm!

END_OF_DOCUMENT_TOKEN_TO_BE_REPLACED

One good thing about this whole lockdown thing is that with all this time at home, I’ve got plenty of time to babysit rising bread dough, which means more home-baked bread! My latest attempt was a batch of orange-flavored buns, which I saw on an online video and decided to try. The buns have a healthy amount of orange zest and a bit of orange juice in the dough, so there’s a hint of orange flavor in the finished buns despite their not being sweet at all. They were quite tasty when toasted and spread with butter, though.

The dough was extremely loose and took 2 hours to rise properly– a fact that filled me with no little trepidation– but despite making half as many buns as the original recipe claimed, they did turn out soft and fluffy, and they stayed soft overnight.

END_OF_DOCUMENT_TOKEN_TO_BE_REPLACED

In case you couldn’t tell, I kind of have a sweet tooth. But while I’m willing to put in hours of work and sacrifice the cleanliness of my entire kitchen to make something special and fancy (and often French), when it comes to everyday baking I prefer recipes that are quicker, easier, and don’t require quite as much washing up afterwards.

Enter this plum crumbcake. I cobbled it together when I had a surfeit of plums and wanted something tasty for breakfast one morning, and while it still uses a few different bowls, at least it doesn’t require creaming butter or separating eggs.

The finished cake is dense and moist, with a nice crunch on top from the almonds– they really do make the cake extra-delicious, don’t omit them– and of course, nice jammy pockets of plums. If I were to make it again, I might cut my plums in sixths or even quarters rather than eighths, just to amp up the fruit-to-cake ratio, but it’s perfectly fine (and probably more sliceable) this way as well.

END_OF_DOCUMENT_TOKEN_TO_BE_REPLACED

Yup, it’s another recipe borrowed from Smitten Kitchen… I can’t help it, it’s my go-to source for tasty recipes and this one turned out so delicious (and pretty) that I couldn’t help sharing!

This galette is easy to put together, looks impressive, and tastes great served cold or at room temperature. The creamy cheesecake filling contrasts nicely with the tart berries (whichever kind you want to put in, fresh or frozen!), and the sugar-studded crust brings it all together. It’s kind of like a three-way cross between a danish, a berry pie, and a cheesecake, and it’s definitely going to be served at my next brunch gathering.

END_OF_DOCUMENT_TOKEN_TO_BE_REPLACED

So remember how I made candied citrus peel with the peels left over from my yogurt panna cotta citrus tart? Well, taking my leftovers game to a new level, I’m using the citrus syrup left over from my candied peel in yet another recipe! This cake is dense and moist, fragrant with orange flavor and slightly sticky from the syrup. The cornmeal and almonds help the cake keep its shape so it’s perfect for eating out of hand by the slice, and the overall flavor is just breakfast-like enough that you don’t feel guilty for doing so! (I had some for breakfast the other day with a dollop of vanilla yogurt and regret nothing.)

Another plus is that the recipe doesn’t require a mixer– I enjoy a light, fluffy butter cake as much as the next person, but lugging out my stand mixer and then cleaning it is kind of a pain, so it’s great to have a whisk-only recipe once in a while. And the melting here means no waiting for butter to soften!

Did I mention that it’s flourless and therefore gluten-free? Just another reason to give it a try…

END_OF_DOCUMENT_TOKEN_TO_BE_REPLACED

I recently took a class on French tarts at my local culinary school, just for fun. I had a great time– I’d never worked with pastry rings before (as opposed to removable-bottom tart pans), nor had I ever made a classic pate sucree to roll into the ultra-thin and ultra-refined French-style tarts. Turns out it’s really easy to do, and the results are fabulous!

Since we had extra dough left to take home, I decided to put it to use making some tart recipes of my own creation. Eschewing rich, heavy fillings (like caramel or chocolate) for the moment, I instead went with something lighter for my first try– a yogurt panna cotta. I find that I don’t make panna cotta nearly enough, probably because it’s so simple that it doesn’t feel “exciting.” So adding it to a tart with a fruity garnish was a natural way to gussy it up a bit and make it interesting.