Coconut is one of those flavors that I didn’t come to appreciate until I was an adult– I hated macaroons as a kid, along with Almond Joy and Mounds candy bars, and so coconut cream pie never appealed to me. Now, of course, I enjoy coconut on occasion (though it’s still not in my top 5)– and who can resist a pudding pie? Not me.

I had an extra refrigerated pie crust that I needed to use up, and when I saw the can of Coco Lopez in my pantry I knew that I’d hit on an idea for dessert. That being said, for some reason I really dislike making custards that require extra egg yolks (probably because then I’d have extra whites to use up), so all of the custard-based pie recipes were out. Instead I was able to find a recipe that called for instant pudding mix that was whipped up using cream of coconut instead of milk– sounded perfect!

The original recipe had a homemade crust made with coconut and coconut-flavored rum, but since the whole point was to use up a refrigerated crust I skipped that part. I ended up adding some extra coconut extract to make up for the resulting reduction in coconut flavor, and the finished pie was creamy, fluffy, decadently rich, and of course delicious.

END_OF_DOCUMENT_TOKEN_TO_BE_REPLACED

You know, sometimes the classics are just the best. I do love making fabulous, multi-component desserts– both for the challenge and the layers of flavor and texture– but every now and then it’s great to go back to basics. Especially when you’re running around frantically to cook your first solo Thanksgiving dinner and you JUST need something good for dessert and your family insists that they HATE pumpkin pie and can’t agree on whether to have apple pie or custard pie and and you’re ready to commit the heresy of getting STORE-BOUGHT just to get it over with–

In any event, we eventually decided on this pie, and boy is it a keeper. As is so frequently the case, it’s from the incomparable Deb at Smitten Kitchen, and having had my first slice I’m fairly sure I could make one of these every week and never get tired of it. The cornstarch pudding is simple to put together and practically foolproof– a for flavor, it’s perfectly rich, not too sweet, and light enough to not weigh you down, even after a holiday dinner. I even used a pre-made crust and it still turned out fantastically… though homemade whipped cream is a must here, I have to insist on it.

END_OF_DOCUMENT_TOKEN_TO_BE_REPLACED

First off, my apologies for the 3-month delay since my last post. Between moving to a new house, dropping my laptop (!) and having to get a new one, and now the holiday season, it’s just been impossible to find time to blog! BUT, I haven’t stopped with the projects, so now I’ve got a backlog of posts to clear– you’ve been warned!

So it’s pie season, and it’s cranberry season, which are pretty much the same thing. Right?

Since my family members aren’t huge fans of cooked fruit (something about the texture?), I decided to join the legions of bakers apparently making cranberry curd pie this year– I was inspired by my friends at The Pie Project (they made a different pie every week for a *whole year*!) to make this one, which features a gingersnap-walnut crust and a tangy layer of cranberry curd that’s perfectly puckery. I couln’t help gilding the lily a bit, so I added a fluffy wreath of meringue and some sugared cranberries– I think the meringue adds a nice contrast, while the cranberries are mostly decorative but still tasty.

END_OF_DOCUMENT_TOKEN_TO_BE_REPLACED

The other day I was in the grocery store, and they were having a sale on Meyer lemons! I’d heard so much about them, how they had a distinctly floral kick to their lightly lemony flavor, and had wanted to try them but never gotten the opportunity– so the fact that they were on sale when I’d be stuck inside for a while seemed like fate!

I immediately knew that the first thing I wanted to make was a lemon tart– one of those whole-lemon tarts where you throw in the whole thing, skin and all, because I figured that it would make the best use of the lemon. I settled on another Smitten Kitchen recipe, which ordinarily would be nothing unusual, but this time was different– I’d actually tried this recipe years ago and it was a disaster. The supposedly unshrinkable tart crust shrank, the filling baked up with a pool of butter on top, and it was just generally bad. Luckily, it appears that other people had the same issue and Deb tweaked the recipe to address the issues.

END_OF_DOCUMENT_TOKEN_TO_BE_REPLACED 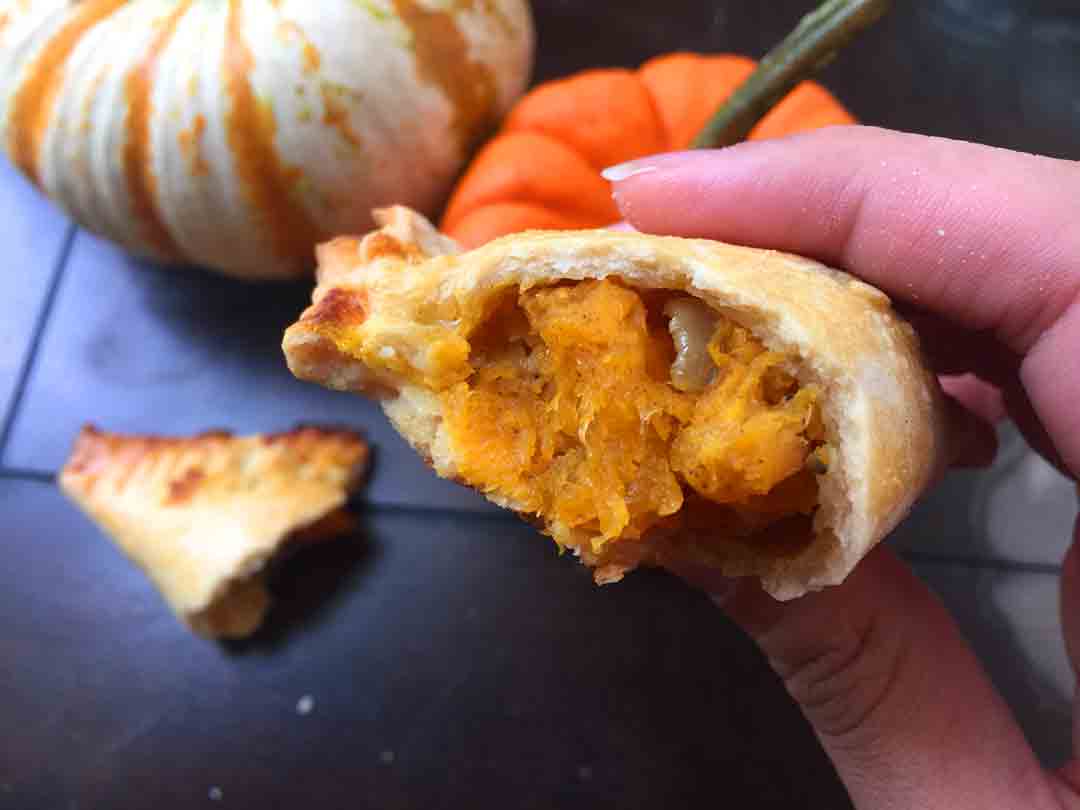 I was invited to a pumpkin-carving party recently, and wanted to bring some kind of snack to contribute. I usually bring desserts (last year I brought these pumpkin cheesecake bars) but everyone brings desserts to these things, so I decided to go in a savory direction this time.

Butternut squash seemed the perfect ingredient to focus on for a squash-theme party, so I started with that. I wanted to keep things handheld and relatively neat to eat, so I knew I’d be enclosing the filling in a pastry, and after that it was just a matter of adding flavors I thought would work. Best of all, the prep time was relatively low since the filling ingredients were roasted together on a sheet pan.

As for the outside, I revisited the hot water crust recipe I used to make Paul Hollywood’s pork pies, since I’d been struck at the time by its flakiness and great flavor. To cut down on leftover scraps I cut my pastry into squares, which were folded diagonally to make little turnover shapes– but I’m calling them pasties here because 1) they sound more savory than “turnovers,” which always evoke dessert to me, and 2) I’m kind of on a Harry Potter kick right now and these remind me of pumpkin pasties (which were probably intended to be sweet, but whatever).

END_OF_DOCUMENT_TOKEN_TO_BE_REPLACED

It’s peach season, and as much as I enjoy eating them straight out of hand, I do on occasion like to use them in desserts. Tarts are a particularly good way to show off gorgeous produce, so it only makes sense that I would end up making a peach tart someday.

I was initially inspired by this recipe from Food52, which was intriguing in that the crust used oil (vegetable and olive oil) rather than butter, and that the fruit itself was topped with a sugar/flour mixture rather than being mixed in with it before baking. The finished tart wasn’t bad, but the crust had a sandy, crumbly texture that didn’t hold together all that well. I thought I could do better.

I made it again, substituting in a crust that uses melted butter but keeping the remaining parts of the recipe, which were pretty darned good. The crust recipe is similar to one I’ve used before, but it includes extra water and oil along with the butter, which seems to work pretty well! Best of all, I made it in one bowl and pressed it directly into the tart pan– no rolling or chilling!

The finished tart is beautiful (but rustic– this is not a pristinely perfect French-style tart), with the crumbly topping melting into a gorgeous bubbly glaze. I like it best served warm with vanilla ice cream, but I’ve been known to eat it with vanilla yogurt so I can call it breakfast.

END_OF_DOCUMENT_TOKEN_TO_BE_REPLACED

I’m a huge fan of the Great British Baking Show. I admit it. It’s just so much fun to watch, and there’s no backstabbing or drama– just baking. There’s not even a huge prize at the end, so it’s clear people are just in it because they love to bake. And aside from the wholesome enjoyment of watching something like that, I have fun seeing the quintessentially British recipes that come up every week. Like pork pies. Cute little mini pork pies with adorable tiny quail eggs in them. (Here’s the episode: it’s around minute 20 of the show.) I just fell in love with those, and when I decided to have a historical-themed picnic I knew that they’d be perfect.

I’d never made a meat-based pie before, and I’d definitely never made hot water crust pastry before, but I was willing to give it a shot! I found Paul Hollywood’s recipe* and got to work! END_OF_DOCUMENT_TOKEN_TO_BE_REPLACED 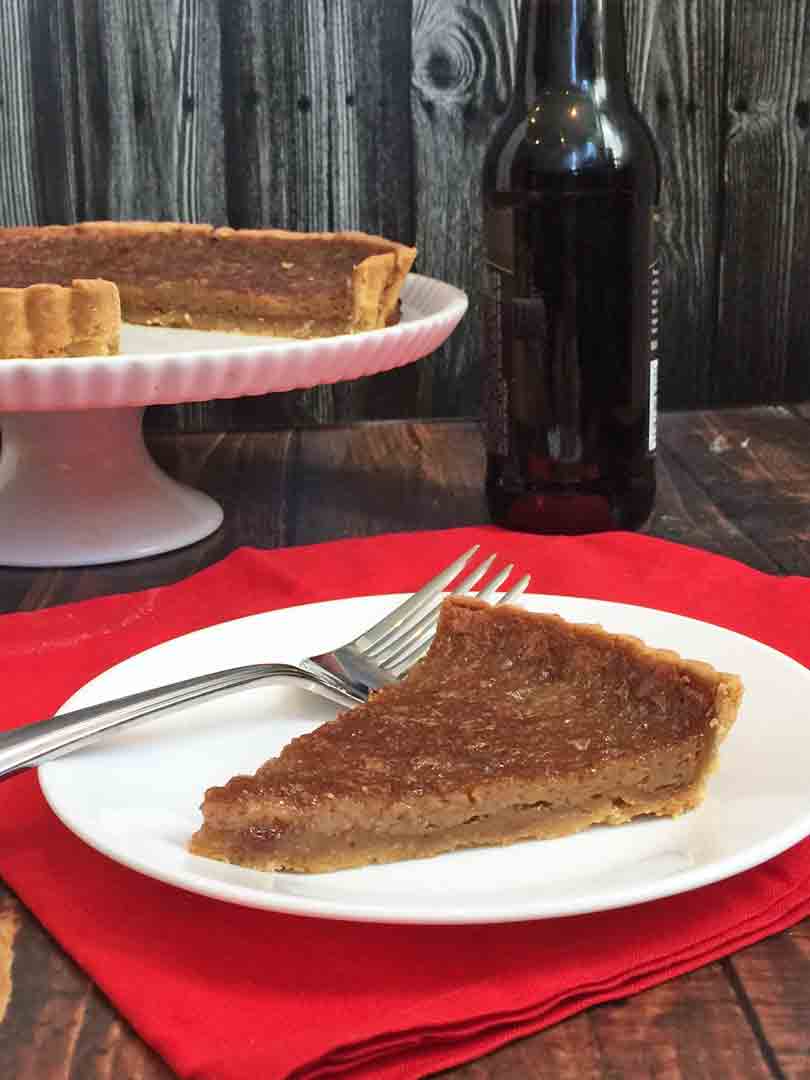 I admit that I’m not usually a beer person– it’s just not my thing, for the most part. But in certain applications, it can be a fun ingredient! This is one of those applications– not only is this tart delicious, but it makes a great dessert for any beer lovers you may know (and any people who, like me, aren’t necessarily beer fans).

I got the recipe from David Lebovitz, who has some great desserts (and a fabulous ice cream book that I use every summer to make my own ice creams) and lives in Paris, so I was confident that he wouldn’t fail me when it came to something called “French Beer Tart.” I was right.

This tart won rave reviews from all tasters– everyone really liked how you could taste the beer (so use one you like) without it being overpowering. One thing I might try next time would be more salt in the crust, or perhaps some ground-up pretzels instead of some of the flour. But the filling is perfect– wouldn’t change a thing.

END_OF_DOCUMENT_TOKEN_TO_BE_REPLACED

I’ve been stretching the last jar of my batch of lemon curd from that tea party I mentioned before, and wondering why, since it’s so delicious, I don’t make it more often. So when an occasion came up to make a dessert for company, it’s hardly surprising that lemon curd was on my mind…

I decided to make a tart, and thought that some fresh blueberries would be a great complement to the tartness of the lemon curd. I dug out an old recipe for a brown sugar tart crust I’d previously used and loved, figuring that its sweetness and slight caramel flavor would add depth to the bright and zingy fruits in the rest of the dessert. And you know what? I was right!

The resulting tarts were beautiful to look at and delicious to eat– definitely a showstopper for company in any season (though I’m sure that the blueberries would be that much more delicious in summer).