It’s no secret that my favorite muffin recipe is this pumpkin white chocolate muffin— I make them regularly for my daughter to take to school for afternoon snacks, and given that she’s been taking snacks daily for almost six years now, I think it’s safe to say that I’ve made many, many batches of those muffins. That being said, unless I want to make a double batch (which I don’t always have room for in my freezer), I end up with half a can of pumpkin leftover. What to do with the extra?

Enter the Pumpkin White Chocolate Snickerdoodle. All the delicious fall flavors of the muffin, but with just a bit more decadence and flair. They may not be as pretty as some cookies– mine refused to puff and thus also refused to crack nicely on top as they cooled– but they’re moist and chewy (unlike some cakey pumpkin cookies), full of flavor, and with a nice crackly outside that contrasts with the creamy white chocolate. As an added bonus, there’s no softening or creaming of butter necessary, though you do have to chill the dough for half an hour.

Definitely adding these to my list of cookies to make on a regular basis, especially if I’ve got leftover pumpkin!

END_OF_DOCUMENT_TOKEN_TO_BE_REPLACED

Is there anything more decadent in the morning than a warm, gooey cinnamon roll? With a soft, plushy crumb, spicy-sweet interior, and layer of cream cheese frosting slowly melting over it all, cinnamon rolls are the ultimate breakfast luxury. And let me just say that these are the best cinnamon rolls I’ve ever made. To be fair, I’ve only made cinnamon rolls a few times in general, but these were so good that I’m not only going to stop looking for other recipes, but I’m going to start making these more often. You can’t get a better endorsement than that!

I always start making these the night before, so that the next morning all I have to do is let them sit on the counter for a while before putting them in the oven to bake. They make the kitchen smell amazing, which is an added bonus. I will note that the thing that sets these apart from other cinnamon rolls is the extra heavy cream– you pour it over the risen rolls just before baking, and it mingles with the cinnamon and sugar to make this incredible gooey finish that takes the recipe over the top.

END_OF_DOCUMENT_TOKEN_TO_BE_REPLACED

So last fall we went apple picking. And you know what happens when you pick apples– you eat a bunch the first week, then the remaining apples just languish in the bag until you can find something to do with them. And since we had a lot of apples, several of them languished for quite a while…

I finally decided that it was time to use up the last few apples, so I went in search of a suitable recipe that I hadn’t tried before– and found this one! It’s apparently a copycat of an apple pie they serve at Disneyworld, and it’s pretty tasty! You start with a pie crust, then fill it with pre-steamed apples (to avoid them getting too juicy during baking) and a thick cake batter. It turns out beautifully golden-brown on top, and the addition of a layer of powdered sugar gives it just the right amount of extra sweetness.

Personally, I cut a corner and used a refrigerated pie crust, but you can make your own if you prefer. I find that using pre-made crusts gets you a thinner layer of crust, which I like in this recipe– too thick and it might end up stodgy-seeming with the extra cake batter in there as well.

END_OF_DOCUMENT_TOKEN_TO_BE_REPLACED

I can’t believe it’s been years since I first made this cake– I fell in love with it the first time I made it, but like so many recipes, I forgot about it while immersed in the search for new ones! In any event, a tres leches cake is a simple sponge cake that’s soaked in “three milks”– evaporated milk, sweetened condensed milk, and regular milk– to make it ultra-moist despite the lack of fat in the cake itself.

The cake is a basic sponge without any butter or oil in it– just egg yolks for fat, with egg whites and some baking powder for extra lift. Amazingly, despite the large quantities of liquid poured over the cake after baking, it doesn’t get soggy, per se– it’s full of moisture, but the spongy texture of the cake keeps it from softening into mush. Instead, it’s just rich and refreshing all at once, somehow. Topping it with extra whipped cream and just a whisper of cinnamon is just gilding the lily…

END_OF_DOCUMENT_TOKEN_TO_BE_REPLACED 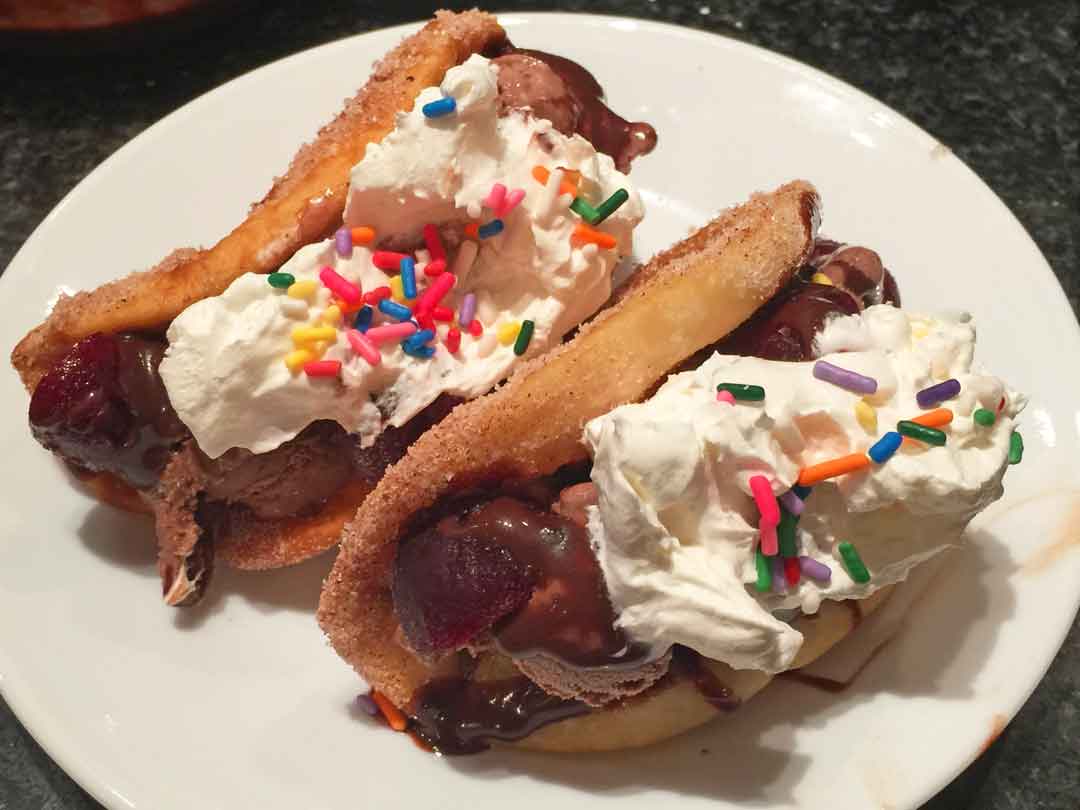 I know, it sounds a little weird, but ice cream tacos are my current favorite summer dessert. The shells are deep-fried and rolled in cinnamon-sugar (like churros), then filled with all your favorite ice cream sundae fixings. The warm, crispy, slightly chewy taco shell gives way to a cold, melty ice cream center, and it all combines with your selected sauces and toppings to make for an unforgettable summer experience. Messy, but unforgettable!

END_OF_DOCUMENT_TOKEN_TO_BE_REPLACED

If there’s any cooking scent more delectable and homey than freshly-baked bread, it has to be warm cinnamon– so it’s no surprise that cinnamon rolls are the ultimate when it comes to comforting (and mouth-watering) odors. When I decided to make these I was only thinking about the gooey and delicious breakfast that awaited me, but let me just say, the smell of the baking rolls was almost as good!

The finished rolls were soft and delicious, though be careful about overbaking– I left them in a bit longer than I should have in hopes of getting more browning on top, but that made the bottoms caramelize in the sticky leaked-out sugar filling, leading to chewy caramel that stuck to my teeth. Other than that, though, they were excellent!

If you have any leftover from the initial devouring, be sure to microwave leftovers briefly to soften them up again– they’re so much better warm!

END_OF_DOCUMENT_TOKEN_TO_BE_REPLACED

So it’s definitely fall, and to me that means desserts full of spices, oatmeal, and fruit. These bars have all of those things– the finely-diced pears form little pockets of sweetness, the walnuts give some crunch, and the oats and cinnamon provide a nice, warm background for everything. They’re more breakfast-y than dessert-y, in my opinion, mostly due to the oatmeal, but that doesn’t make them bad. I’d classify them as a good fall snack, though they fall apart a little too easily for just carrying around and munching. They’d be fabulous with a nice cup of hot apple cider… I may try that myself tonight!

END_OF_DOCUMENT_TOKEN_TO_BE_REPLACED

I recently had half a can of pumpkin left over from making a batch of my favorite pumpkin chip muffins, so I mixed up a batch of seasonally-appropriate pumpkin pancakes over the weekend. They’re easy to make and smell amazing as they cook, and the spice and sweetness level is perfect when paired with maple syrup. I added a sprinkling of toasted, salted pecans for extra crunch and it was a great addition.

END_OF_DOCUMENT_TOKEN_TO_BE_REPLACED 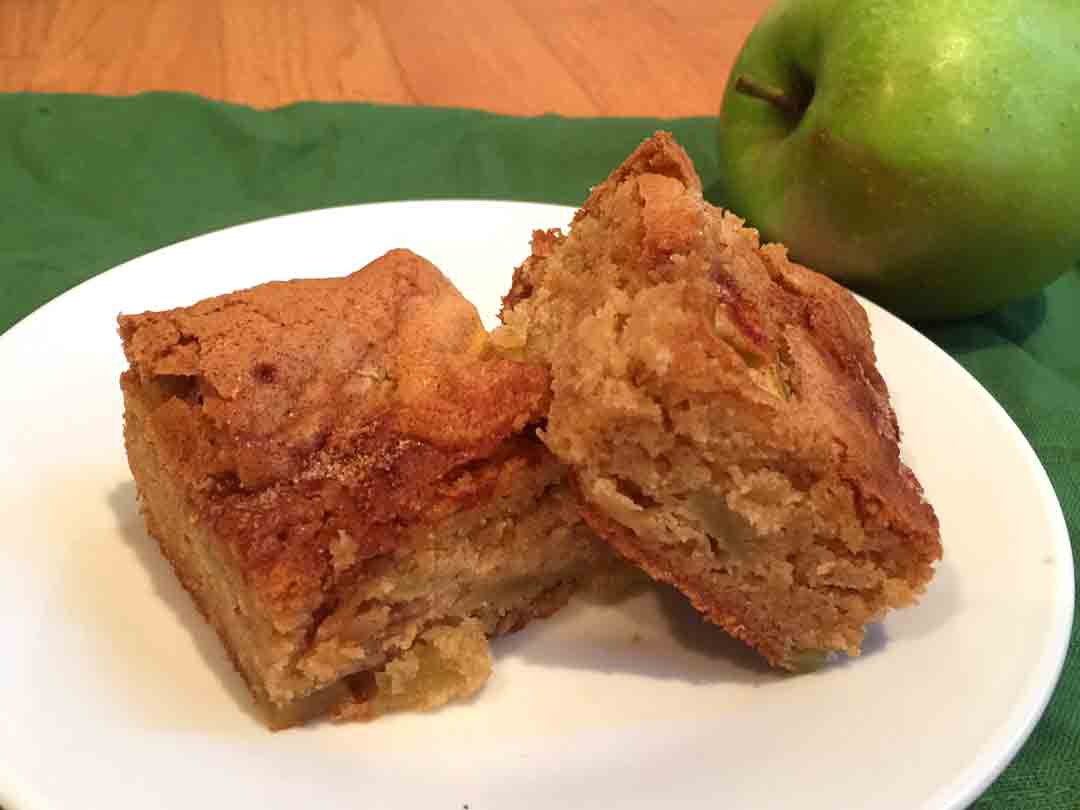 It’s fall! And fall means apple picking. And apple picking means a huge bag of apples that looks manageable at first but rapidly starts seeming insurmountable. What is one to do? Well, you can always make these!

These apple pie blondies are perfect for fall– they’re rich and sweet, with added texture and tartness from the apples and a crunchy cinnamon-sugar top that crackles with every bite. Less fruity than cobbler but chewier than cake, they’re perfect eaten out of hand but would also be amazing served warm with a scoop of vanilla ice cream. And they stay moist for days, which makes them great for lunchboxes or just having around the house to snack on.