You know, despite having used choux pastry to make cream puffs (a LOT), breakfast pastry, and fancy French praline desserts, I’d never used it to make éclairs before now. I wonder why? Perhaps because I tend to like my desserts either tiny and adorable (like, bite-sized), or big and easy to serve to a crowd. In any event, I was recently invited to a last-minute dinner party and needed something light, summery, and capable of being ready to transport in 90 minutes or less.

A quick scan of the kitchen showed that I had no fruit to bake into a crumble or cake, no thawed butter I could use to make frosting (even if I’d had time to bake and cool a cake enough to be frosted), and no leftover cake scraps or cookies that I’d ordinarily be able to use as the base for something interesting and maybe ice cream-based. And then I thought of choux– made of pantry staples, it would bake up quickly and could be filled with any number of things; plus, it would be best filled on-site, which would give me a little more time to acquire fruit or something else tasty for a filling on the way to the party.

END_OF_DOCUMENT_TOKEN_TO_BE_REPLACED

I’ve made cream puffs on this blog before, but while they’ve been light and puffy and filled with delectable cream, they’ve never been what I would call “pretty.” I’ve come to the conclusion that my standard choux recipe is just a tad too thick– not eggy enough– and that’s making the piped choux blobs slightly irregular in shape, which translates to unevenly-puffed cream puffs. I’ve decided to adapt my recipe to add a bit more egg, and to add an extra layer of protection– a craquelin.

A craquelin topping is a circle of sugar-butter dough that you put onto the unbaked choux. As the choux bakes, the craquelin cooks over the top, expanding with the choux and creating an uneven, crunchy, sugary top that adds texture to the puff as a whole. Also, I figured that having something on top of the choux would help even out the rise in the oven.

END_OF_DOCUMENT_TOKEN_TO_BE_REPLACED

I’m a sucker for pastry, especially at breakfast, so when I came across this recipe for King Arthur Flour’s Almond Puff Loaf, which promised a delicious, multi-layered pastry in only a few simple steps, I knew I’d have to try it out. It starts with a base that’s halfway between a biscuit and a pie crust, and it’s topped with choux paste to provide some serious puff. The process reminded me a little of the Gateau St. Honoré, but the finished product was very different– probably because of the different ingredient proportions.

I also decided to add a layer of almond paste between the two doughs, to really amp up the almond flavor– I would highly recommend it to anyone seeking to try this recipe, along with using apricot jam, which pairs perfectly with the almond.

END_OF_DOCUMENT_TOKEN_TO_BE_REPLACED

Sweetened red bean paste is a staple of many Asian desserts, but I never really liked it growing up– compared to the other available dessert standards (chocolate, vanilla, etc.), it was just too “beany” for me to enjoy. But that all changed when I grew up and tried the incredible Azuki Bean Cream Puff at a local French-Japanese bakery.

The pastry has a thick layer of red bean paste on the bottom, and then is filled to bursting with sweetened whipped cream. I still haven’t figured out how they managed to make the flaky pastry so close to spherical when full, but I’ll do it eventually! In the meantime, I made do with regular choux pastry and made cream puffs. These are split, spread with red bean paste, and filled with stabilized whipped cream. Delicious! The lightness of the cream contrasts beautifully with the dense, sweet, slightly earthy red bean paste, and the pastry adds a little textural interest to the dessert.

END_OF_DOCUMENT_TOKEN_TO_BE_REPLACED 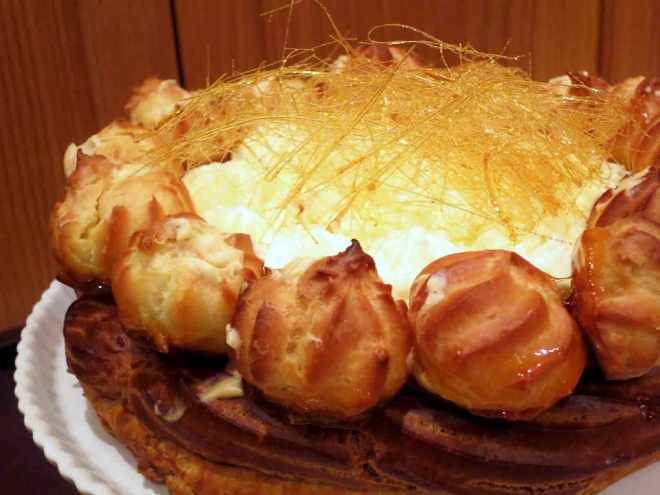 When I was in Paris I finally got the chance to try the famous Gateau St. Honoré– a toothsome confection consisting of a layer of puff pastry, topped with a piped choux pastry swirl, topped with a ring of caramel-dipped cream puffs, and filled with fluffy cream. It was rich, decadent, and begging to be reproduced at home. Of course, I can rarely leave well enough alone, so when I decided to try making one I thought it would be delicious to incorporate elements of another famous French dessert, the Paris Brest.

Paris Brest is made of a large ring of choux pastry (meant to resemble a bicycle wheel, as the dessert was created in honor of a bicycle race), which is split and filled with a praline mousseline cream. The praline is made of caramelized hazelnuts and almonds, pulverized until they turn into paste, which is then folded into the cream.

I actually vacillated between which of these desserts to make, as both sounded fantastic, but in the end the Gateau St. Honoré– being both more complicated (I always love a challenge) and involving puff pastry, which I always adore– won out. But instead of the regular chiboust (mixture of plain pastry cream and Italian meringue) to fill the center, I made two changes: First, I used diplomat cream (mixture of pastry cream and whipped cream) instead of chiboust cream, because I hate making Italian meringue– too fiddly with the sugar syrup. Second, I decided to add praline paste to the cream to deepen the caramel flavor of the dessert.

The result? Spectacular. The flakiness of the puff pastry base adds just enough textural interest to the slightly firmer choux pastry and the gobs of creamy, hazelnut-kissed filling. The hard caramel dip on the cream puffs is just enough to crunch between your teeth and provide a hint of bitterness, and the dessert as a whole is light yet rich. I will absolutely make this again the next time I need an impressive finish to a meal.

END_OF_DOCUMENT_TOKEN_TO_BE_REPLACED 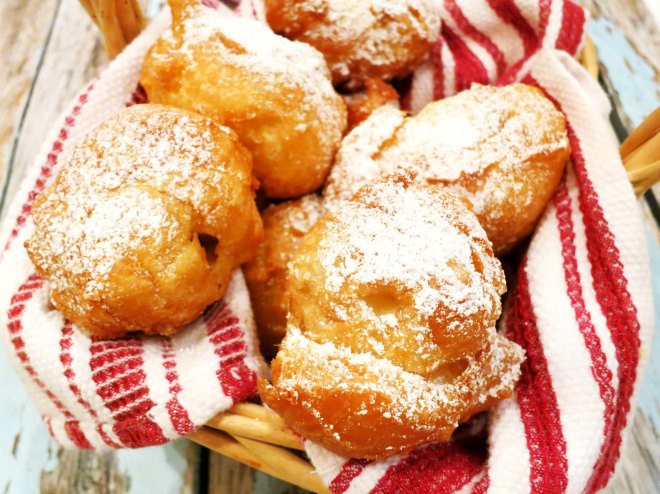 I was definitely a fan of Laura Ingalls Wilder’s Little House series as a child. Wasn’t everyone? Okay, perhaps not, but I enjoyed the descriptions of the day-to-day life (however fictionalized), and one of the food descriptions that stayed with me was in the third book, On the Banks of Plum Creek, where Ma fries up a batch of “vanity cakes” for Laura’s birthday party.

She made them with beaten eggs and white flour. She dropped them into a kettle of sizzling fat. Each one came up bobbing, and floated till it turned itself over, lifting up its honey-brown, puffy bottom. Then it swelled underneath till it was round, and Ma lifted it out with a fork. She put every one of those cakes in the cupboard. They were for the party.

The cakes were not sweet, but they were rich and crisp, and hollow inside. Each one was like a great bubble. The crisp bits of it melted on the tongue.

They ate and ate of those vanity cakes. They said they had never tasted anything so good, and they asked Ma what they were.

“Vanity cakes,” said Ma. “Because they are all puffed up, like vanity, with nothing solid inside.”

As a kid I could picture these exactly– they’d be crispy and thin and about the size of a large plum, with a golden brown outside that shattered when bitten into, and maybe just a faint hint of chew on the inside. They sounded really delicious, and I wished I could try them.

The Little House Cookbook apparently has a very basic recipe for these, but every single one of the online reviews for the recipe states that the cakes just don’t puff up that much– they’re dense and eggy, not crispy, and certainly not hollow inside. This didn’t sound right at all, so I had to think of some other way to achieve the effect. Then I thought of choux pastry.

END_OF_DOCUMENT_TOKEN_TO_BE_REPLACED 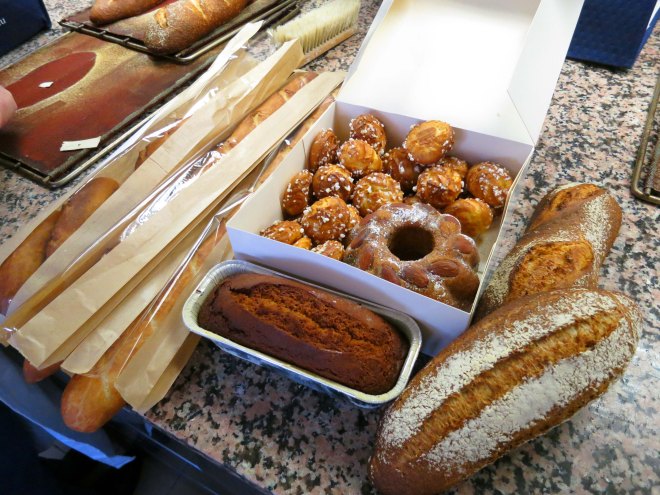 Guess where I am right now? … Well, yes, you’ve read the title of the post so clearly I’m in Paris, but let’s pretend it was a surprise. I’m taking a 4-day short course in Traditional Breadbaking at Le Cordon Bleu Paris!

I just finished Day 1, which included baguettes, kugelhopf, pain de champagne (country style bread with fermented dough), pain complet (whole wheat bread), Pain d’ epices (gingerbread), and chouquettes. The class is being taught by Oliver Boudot entirely in French, but there’s an English translator on hand translating everything, so it was really easy to follow. We were supplied with aprons, tea towels, and everything we needed to follow along and bake from 8:30am to 3:00pm! END_OF_DOCUMENT_TOKEN_TO_BE_REPLACED