I knew when I decided to make a day dress that I would need an appropriate bonnet to go with it– after all, I would be spending some of the afternoon outside, and no self-respecting lady would be seen outdoors without a head covering of some kind! A little searching found several tutorials about the simplest way to make a bonnet from a standard straw hat (here’s the best one I found), and when I located a straw hat at my local vintage clothing store for the low, low price of $0.00 (I had a free coupon for $10 credit– the hat itself was priced at $8) I snapped it up. The brim was a little smaller than I’d have liked, but for a free hat I wasn’t going to complain.

After removing the hideous ribbon, the first thing I did was to cut off a straight section from the back of the hat. I rounded the corners so they wouldn’t look so abrupt, and angled in a little arc at the base of the neck to let it fit better against my head. I also ended up cutting off the top of the crown entirely in order to leave enough space for my hair.

Next I took a piece of white point d’esprit netting that was three times as long as the circumference of the bonnet brim, and about 15″ wide. Since it was netting I didn’t bother to hem it, but if I’d gone with regular fabric (like a white voile) I’d have pinked or hemmed the edge. I gathered the long side to the underside of the brim, pinning and then sewing it in place, then tacked the gathered fabric to the inside of the crown and the inner edge of the back of the bonnet. Basically, I had a shaped ring of straw, lined with gathered netting.

I got more fabric– this time fabric that coordinated with my dress– and cut a rectangle that was twice as long as the circumference of the crown, and 18″ wide.  I folded it in half lengthwise, then stitched the long edges right sides together. When I turned it right-side out I also moved the seam to the center before pressing the edges, and then stitched the short sides together to make a ring, leaving 1/2″ unsewn so I could insert a drawstring. I ran the drawstring through the gap along one long edge (no casing!), pulling it tight and tying it off, then turned the resulting fabric bag inside out and there was the back of my hat. I topstitched 1/4″ from the non-drawstring edge to keep things neat. 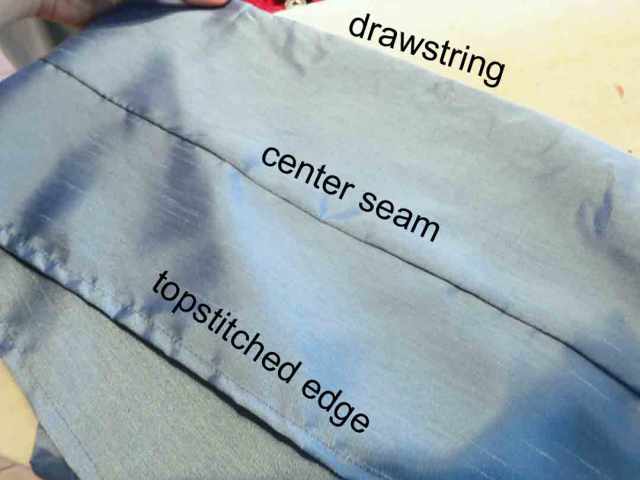 Next I pinned the bag to the crown of the straw hat before stitching it down by hand. The stitching wasn’t going to matter because it would be covered by a ribbon, so I wasn’t too nit-picky about neatness. The resulting crown was rather puffy, even on the inside, and didn’t leave a ton of space for hair, but it was flexible enough to work. I think next time I might make the original rectangle 20″ wide instead of 18″ (but I only bought half a yard of fabric this time, so I made do).

Once the bonnet back was attached, I hot-glued 1/2″ wide double-fold bias tape all around the edges of the hat. I left the white ruffle free, but bound everything else neatly.

Next it was time to decorate!

I used a 1.5″ wide ivory ribbon and an accent of 3/8″ sheer brown ribbon to go around the crown. Then I used more ivory ribbon to make the bonnet ties, and stitched several types of silk blossoms to one side of the bonnet, following up with hot glue to keep everything firmly in place.

I will note that once the bonnet was finished, I tried it on and it DID NOT FIT. It was too small– I’d known the hat was a bit snug when I’d first purchased it, but I figured that it would work anyway once I cut bits of it off. Unfortunately the lining added just enough thickness that it was just not working. I wasn’t sure what to do, so I spritzed the inside of the hat (around the edge of the crown) generously with water and jammed a large mixing bowl right down into the hat, tying the ribbons over it to hold it in place. Then I let it dry for about 24 hours, after which the straw had stretched out enough to fit properly again. I wouldn’t have tried this if the lining were made of regular fabric, but the soft nylon (?) netting was resilient enough that I figured it would be fine– and it was! I’ll remember this trick for next time!