With all the pattern alterations I’d be making to TV432, I knew I’d have to make at least one mockup, likely several. Since I don’t have a ton of experience altering patterns so drastically, I decided to cut a mockup from the straight pattern just to see how it fit. Oddly, the size according to my measurements ended up being too small, so I cut the front two sizes bigger to give myself tons of room, marked (but did not stitch) the darts, and then tried on the mockup so I could pinch darts and seamlines to fit.

I determined (like the Modern Mantua Maker) that the best way to incorporate my center front panel was to morph the darts into princess seams, one of which would form the closure of the gown. I basically put the mockup on, pinned the center front closed, and pinched in princess seams on either side. You may be able to see that I tried two (very slightly different) options for the shape of the curve– I ended up going with the one on the left. There are also single darts to the outside of the seams, for better fit.

I will note that while the original center front line was shaped to allow the two pieces to be sewn together for a nicely curved bustline, I pinned the center front down a straight line so I could cut the center panel as a single piece later on. I’m small-busted enough that this didn’t cause any issues, but if you’re well-endowed you may want to keep the center front panel as two pieces so you can sew in that curved bustline. As long as you add an overlay to cover the seam it won’t matter.

Then I cut out new pattern pieces based on the new seams and did a second mockup, making the center panel in a contrast fabric just to make sure I liked the look. The pins are distorting the lines a bit in this picture, but a few more tweaks were still necessary after this to get things just right.

Once I had the body of the gown mocked up, I whipped up one sleeve and attached it to make sure that I had enough freedom of movement through the arms. I cut it to a bit above 3/4 length (just barely below the elbow, so I’d have space for my lace ruffles), and raised the armscye by about 1.5″ at the shoulder, since the original shoulder seams were far too dropped to allow for freedom of movement.

Then I used a Sharpie to sketch rough lapels on the bodice so I had an idea of what shape I’d like them to be. 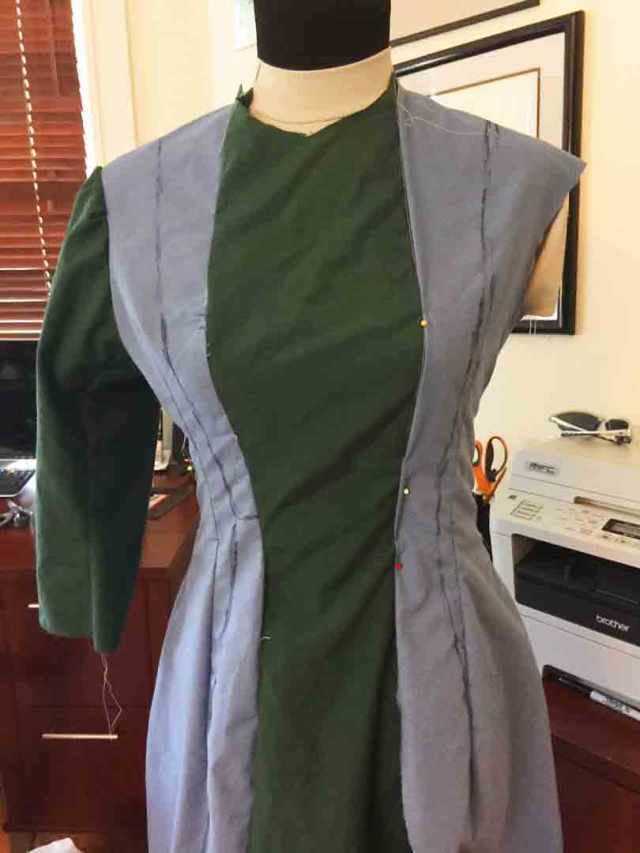 I cut out the lapel pattern in two pieces, because that just made them easier to fit onto my fabric. The connecting seams will be mostly covered by the belt anyway, kind of like the bretelles on my mauve Edwardian dress.

So to recap the changes I made to the pattern:

So my mockups are done and my pattern is set. Now I just need to get some plain cotton to use as my lining and I can actually get started assembling the real thing!