One of my favorite things about this gown is that although the top layer is loose and flowy, the very fitted underdress showing through the sheer layer keeps it from looking too tent-like. If I had to guess I would say that the movie gown’s underdress (seen clearly above) is tight-fitting satin with some extra fullness below the knee to allow for movement. Since I don’t have Audrey Hepburn’s stick-thin figure and have no intention of spending an evening in a dress so tight I can’t move freely, I’ve decided to go in a different direction and use a bias-cut underdress.

Bias-cut gowns have all the clinginess of a perfectly-fitted gown, with just a bit more breathing room. However, while I do consider myself a reasonably capable sewer, I have never worked on the bias before and shuddered to think of doing it for the first time with satin, of all fabrics. All of the online tutorials warned against it, so rather than tempt fate I decided to take the easier route and find an existing white bias-cut gown to modify. I know, I know, I do this a lot, but in this case I think it was completely justified.

After much searching (apparently white bias-cut gowns in my preferred price range are difficult to come by… perhaps because anything labeled “wedding” gets extra expensive) I found this ivory satin bias-cut dress.  I think it was modeled after Pippa Middleton’s bridesmaid dress, which was obviously pretty popular because I saw several different dresses that looked similar online. It’s not perfect– the neckline is wrong and I would prefer it if the ivory were a slightly lighter shade– but the price was right and I thought it would do very well with some modifications.

First I cut off the cap sleeves, which was easy enough to do. Then tackled the neckline. The front cowl neck was all wrong for the design, but luckily it had a separate underlayer with a scoop neck, so I was able to cut off the cowl layer to reveal the neckline underneath. Ordinarily I would’ve unpicked the seams, removed the top layer, and re-sewn, but in this case the raw edges were going to be covered by an overdress and flashy rhinestone jewelry so I didn’t bother. However, the scoop neck wasn’t quite the right shape for the dress– a bit too low and too narrow– so I did end up having to turn the dress and lining inside-out and stitch a wider scoop for the neckline, front and back. Then I took it up at the shoulders to raise the neckline, which also made the dress just a bit shorter (fine with me since I wanted to wear relatively low heels for comfort). See the before and after below: 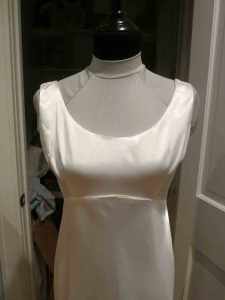 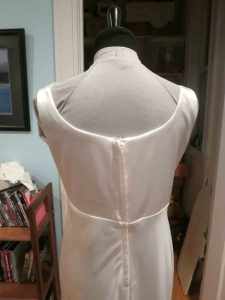 I also cut off all of the tiny covered buttons down the back– while they’re adorable, they have no place on an underdress. I’ll save them to use for something else (or more likely, to allow them to languish unused in a drawer for a few years before being thrown out in a fit of cleaning).

So, the underdress is now finished! On to the overgown!