This cake wasn’t so much a project as a thrown-together amalgamation of the leftovers from my sesame/tahini experiments over the past week. I had a bunch of sesame-caramel ganache from my sesame macarons, plus extra sesame seed brittle from the ice cream I made to go with my sesame chess pie, plus extra egg yolks from that same pie, plus a few extra macarons that I hadn’t gotten around to eating yet… what else could I do but make a cake? (I do have a history of doing this, you know)

I looked hard to find a yellow cake recipe that would use my three extra yolks and no more, and I did find one, but honestly I didn’t care for it– it was an oil-based cake rather than a butter-based cake, and while the oil made for a very moist crumb I just think that the recipe called for too much oil. The batter didn’t fully emulsify and I got small tunnels in the finished crumb, plus the cake was so rich that it seemed heavy. I won’t post the cake recipe here– I need to find a better one for when I have extra yolks– but I will post the fabulous tahini buttercream that I made to go with it, which turned out great. The tahini added a wonderful savoriness to the frosting that worked well with the salted caramel ganache and the sugary macarons.

END_OF_DOCUMENT_TOKEN_TO_BE_REPLACED

These macarons were the result of my seeing that recipe for sesame chess pie and noting that 1) it would require me to buy sesame seeds and tahini, and 2) it would result in extra egg whites. I figured that I could take advantage of both these facts and make sesame-flavored macarons, which turned out pretty well! I used my standard macaron recipe and technique, sprinkling sesame seeds on top of the batter before baking, but the filling was where the sesame really came out.

The filling is more complicated than a plain ganache– it’s actually a caramel sauce blended with melted chocolate, and then emulsified with butter for a smooth, creamy texture. I got the recipe from Cloudy Kitchen and split it in two so I could try a white chocolate variation on the milk chocolate original, and both turned out quite well (even if it did make a ton of filling– I’ll have to find something else to do with all of the extra!). I would recommend these if you want something a little different and don’t mind multi-step processes!

END_OF_DOCUMENT_TOKEN_TO_BE_REPLACED

I’ll confess right off the bat that I’ve never tried regular chess pie before. Heck, I only heard of it recently as basically a sugar pie, like a pecan pie without the pecans, and it sounded too sweet to deal with. But when I came across a recipe for Sesame Chess Pie I was intrigued. I’ve always liked experimenting with adding savory flavors to my sweets, and tahini is like a less assertive peanut butter in that sense. I decided to give it a shot, figuring that I could use the extra egg whites to make macarons later on (more on that later).

The pie itself is a cinch to whip up– especially if you use a store-bought pie crust– and aside from the tahini calls for standard pantry ingredients (at least in my pantry). It puffed and browned beautifully in the oven before settling down during cooling, and smelled delicious.

I served mine with a scoop of no-churn orange-sesame ice cream, which was basically this recipe except I substituted sesame seeds for almonds.

END_OF_DOCUMENT_TOKEN_TO_BE_REPLACED

I was looking at recipes the other day when I came across a recipe for tahini-oatmeal cookies– it billed itself as being vegan, gluten-free, and whole-grain, which ordinarily wouldn’t be in its favor, but it occurred to me that I probably had some leftover tahini in the fridge, so I decided to give it a shot. Sure enough, I had about an inch of tahini left in my jar– just enough to eke out the 1/3 cup necessary for the recipe– plus a few spoonfuls of almond flour leftover from my aquafaba macarons, so it was clearly fate!

Since there was no additional fat in the recipe the dough went together quickly, though it didn’t spread at all in the oven so the resulting cookies ended up a bit too doughy to qualify as “cookies” in my book. I think next time I’ll flatten them out a bit more and hope they crisp up around the edges. I do appreciate the tahini flavor, though, which (as I’ve said before) goes excellently with dark chocolate, and is helped along by a healthy dose of salt. Oddly enough, the combination of tahini and oats reminds me a bit of walnuts, which would also go excellently in these cookies if you so desired.

END_OF_DOCUMENT_TOKEN_TO_BE_REPLACED 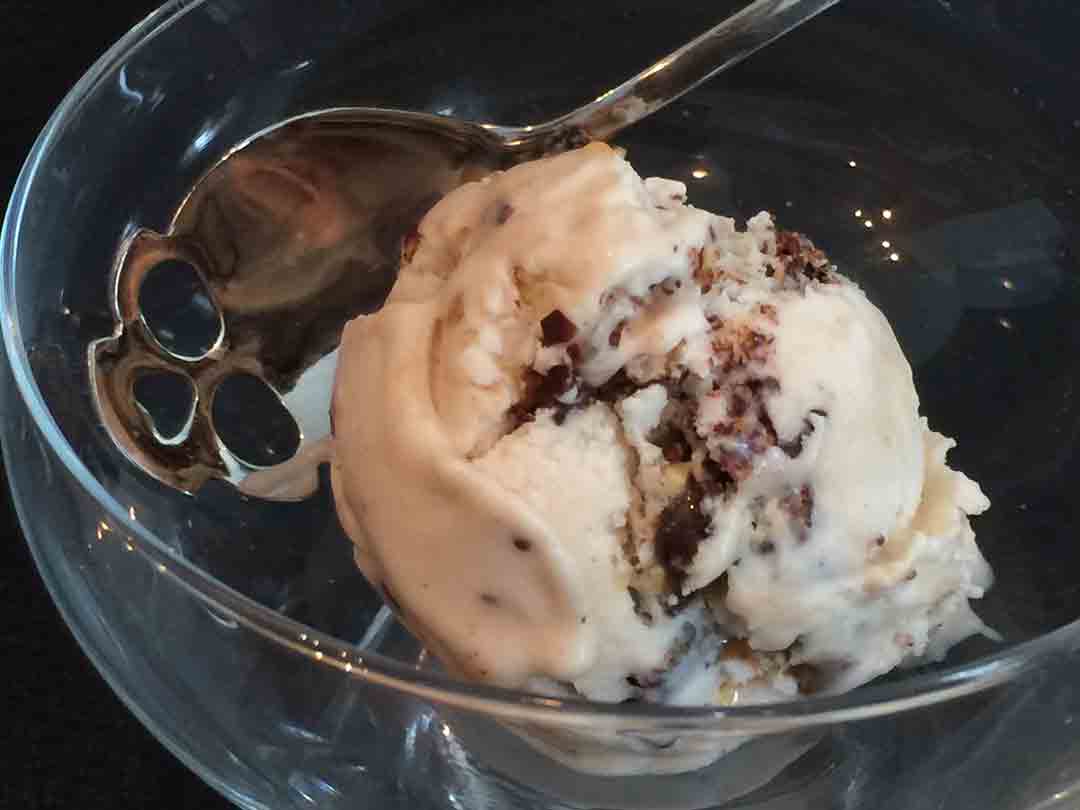 Taking a break from sewing for the moment (wow, I’ve been doing a LOT of that)…

My family recently hosted our annual ice cream social, which of course meant that I had to come up with some original flavors of homemade ice cream to serve! You’d think that it would get harder and harder every year to find something interesting and new to make, but there are just so many flavor combinations that I’ve never lacked for inspiration.

I really wanted to use chocolate-covered cornflakes as a mix-in this year, and was trying to decide on an ice cream base when I spied a jar of tahini in the fridge. Just like that, a new flavor was born!

This tahini ice cream is faintly reminiscent of peanut butter but with an added savory element, set off nicely by the dark chocolate-covered cornflakes and a swirl of caramel sauce. It churns up relatively quickly, perhaps aided by the added fat content of the tahini– like many homemade ice creams it freezes up pretty hard, but once it softens enough to scoop it doesn’t collapse into a melty puddle, so it has that going for it. As an added bonus, it pairs wonderfully with dark beer.

*By the way, did you notice my awesome skull-shaped spoons?

END_OF_DOCUMENT_TOKEN_TO_BE_REPLACED

I was invited to a last-minute barbecue the other day, and with nothing in the house to contribute I was forced to scramble for a dessert idea! A quick survey of my fridge revealed a mostly-used can of tahini, and as luck would have it I had a decent-sized chunk left from a Trader Joe’s Pound Plus bar of dark chocolate. Clearly, brownies were in order.

I did a search online and found a frequently-lauded recipe for tahini-swirled brownies from Milk Street Magazine. I lifted the recipe in its entirety, though I admit to making a careless error and accidentally using 4 oz. of butter rather than 4 tablespoons of butter! Oops! Luckily it didn’t seem to hurt the recipe any– the interior of the brownie was moist and plushy in a way I’ve never seen in brownies before, and I really liked it. I’m tempted to keep the revision, but I’ve printed the recipe below as written so you can try the original. You’ll have to tell me how it turns out for you!