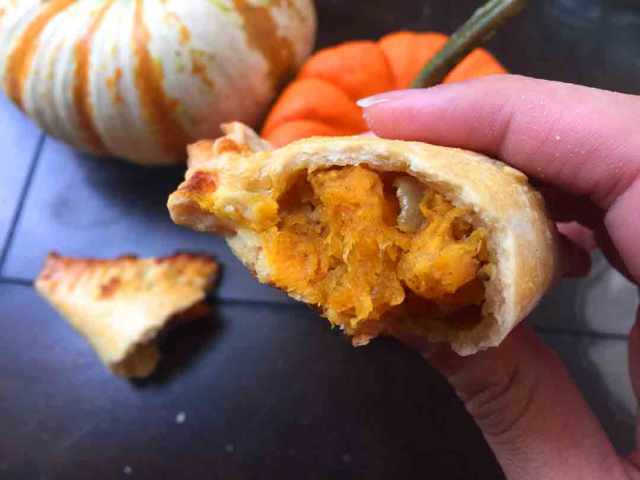 I was invited to a pumpkin-carving party recently, and wanted to bring some kind of snack to contribute. I usually bring desserts (last year I brought these pumpkin cheesecake bars) but everyone brings desserts to these things, so I decided to go in a savory direction this time.

Butternut squash seemed the perfect ingredient to focus on for a squash-theme party, so I started with that. I wanted to keep things handheld and relatively neat to eat, so I knew I’d be enclosing the filling in a pastry, and after that it was just a matter of adding flavors I thought would work. Best of all, the prep time was relatively low since the filling ingredients were roasted together on a sheet pan.

As for the outside, I revisited the hot water crust recipe I used to make Paul Hollywood’s pork pies, since I’d been struck at the time by its flakiness and great flavor. To cut down on leftover scraps I cut my pastry into squares, which were folded diagonally to make little turnover shapes– but I’m calling them pasties here because 1) they sound more savory than “turnovers,” which always evoke dessert to me, and 2) I’m kind of on a Harry Potter kick right now and these remind me of pumpkin pasties (which were probably intended to be sweet, but whatever).

END_OF_DOCUMENT_TOKEN_TO_BE_REPLACED

Okay, so “Butternut Squash with Gouda” isn’t exactly the most exciting name for this dish, but I couldn’t think of anything better so there it is. Besides, while the name may be boring, the recipe is anything but– it takes a few simple ingredients and combines them into a rich, flavorful, autumn-centric (new word!) dish. You get tender chunks of butternut squash, mixed with sweet and savory caramelized onions, a hint of sage, a creamy strata of gouda cheese, and it’s all topped with a crunchy layer of toasted panko. It would make a fabulous side dish for this year’s Thanksgiving.