For Costume College this year I’m joining a group of other costumers in donning our very best 1920s daywear in imitation of the incomparable Miss Phryne Fisher! Aside from her undeniable stylishness, the comfort factor was a big influence on my decision to join the crowd– Los Angeles in July just cries out for flowy, comfortable clothing, and 1920s outfits fit the bill admirably.

I actually wore some 1920s daywear last year as well, but thought I’d mix it up a bit this year and go with a jacket-and-pants combo, since Miss Fisher makes it look so darned good. Rather than try to sew the main pieces myself (pants scare me), I did some judicious sourcing of pre-made pieces, one of which was this jacket!

This fabulous kimono-style jacket in embroidered chiffon looks oh-so-1920s and cost just about $20 on eBay. Score! It’s actually listed as an abaya— commonly worn by Muslim women– but it works perfectly as an over-jacket for this period. I’m a sucker for embroidery, and the style of this multicolored embroidery just hit the spot for an art deco-ish look.

END_OF_DOCUMENT_TOKEN_TO_BE_REPLACED

In case you hadn’t noticed, my recent spate of costume posts was inspired by my upcoming trip to Costume College this year. I went this past weekend and it was fabulous! Also, my daughter sent her Cat-icorn (above) with me to keep me and my tiaras company.

These are totally my people– detail-obsessed lovers of gorgeous and/or hilarious outfits, willing to discuss the intricacies of fabric design or corsetry at the drop of a hat, and always appreciative of the work we all put into these things! I can’t wait to go back next year!

I did take a few photos of randomly beautiful costumes, but not nearly as many as I should have. Also, I was wearing gloves for two of the big events and it’s a lot harder to manage taking pictures with my phone that way. Next year, fewer gloves = more pictures!

END_OF_DOCUMENT_TOKEN_TO_BE_REPLACED 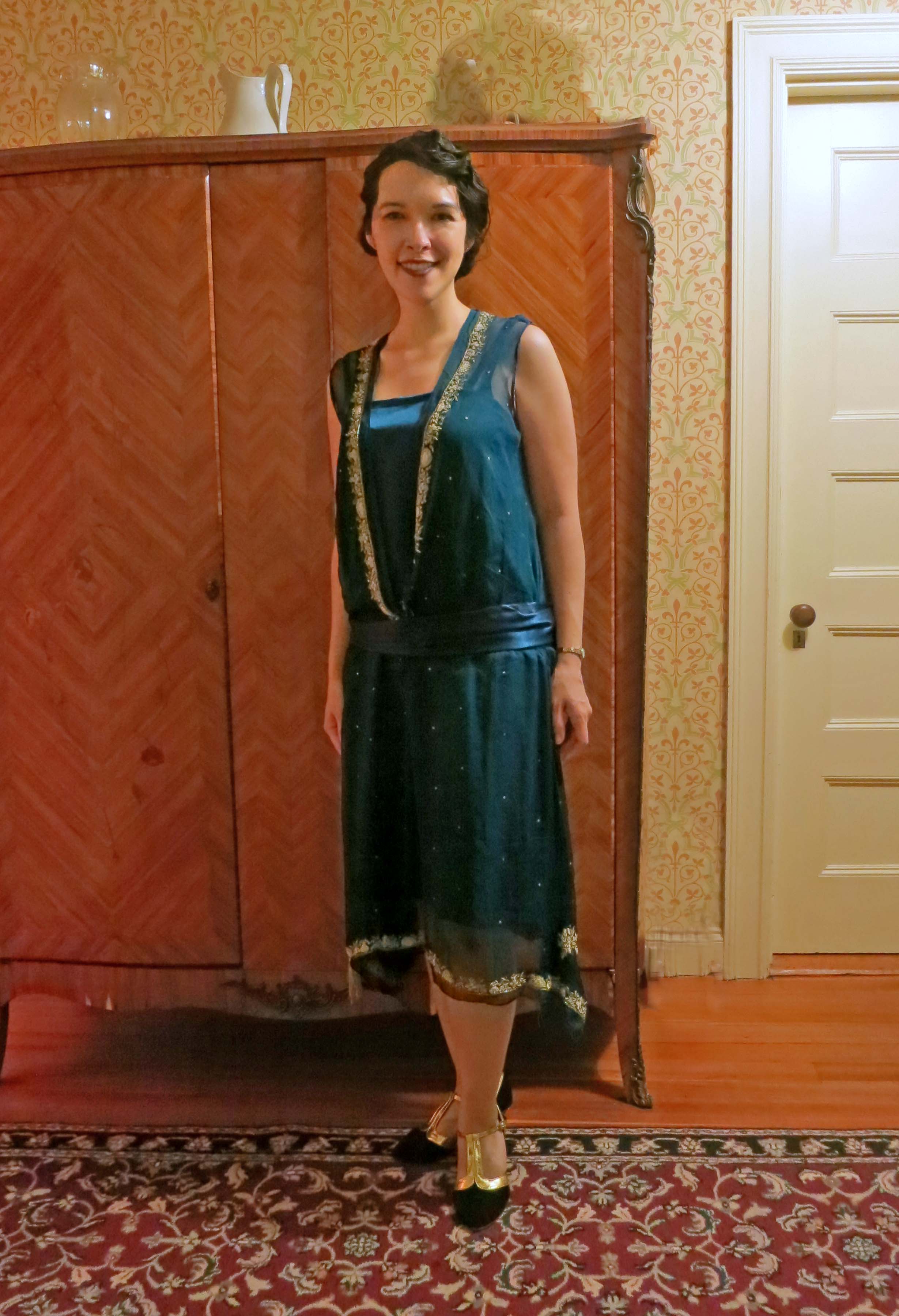 So last year I whipped up a quick 1920s evening dress using a vintage silk dupatta and a basic One-Hour Dress pattern. It was fast, easy, and the fabric made it interesting despite its shapelessness. I learned that I really enjoy sewing with vintage saris and dupattas, simply because of all the fantastic details that are already present in the fabric– no extra embellishment needed!

That being said, you knew I couldn’t stop there, right? Having made a bunch of 1920s-style day dresses, I decided to revisit the evening dress and my love of vintage dupattas to make a glamorous emerald green flapper-style dress. While I don’t ordinarily wear a lot of green, I admit to having been inspired by Cyd Charisse’s sultry green costume from Singin’ In the Rain– I may not be quite as fabulous as she was, but I can aspire! 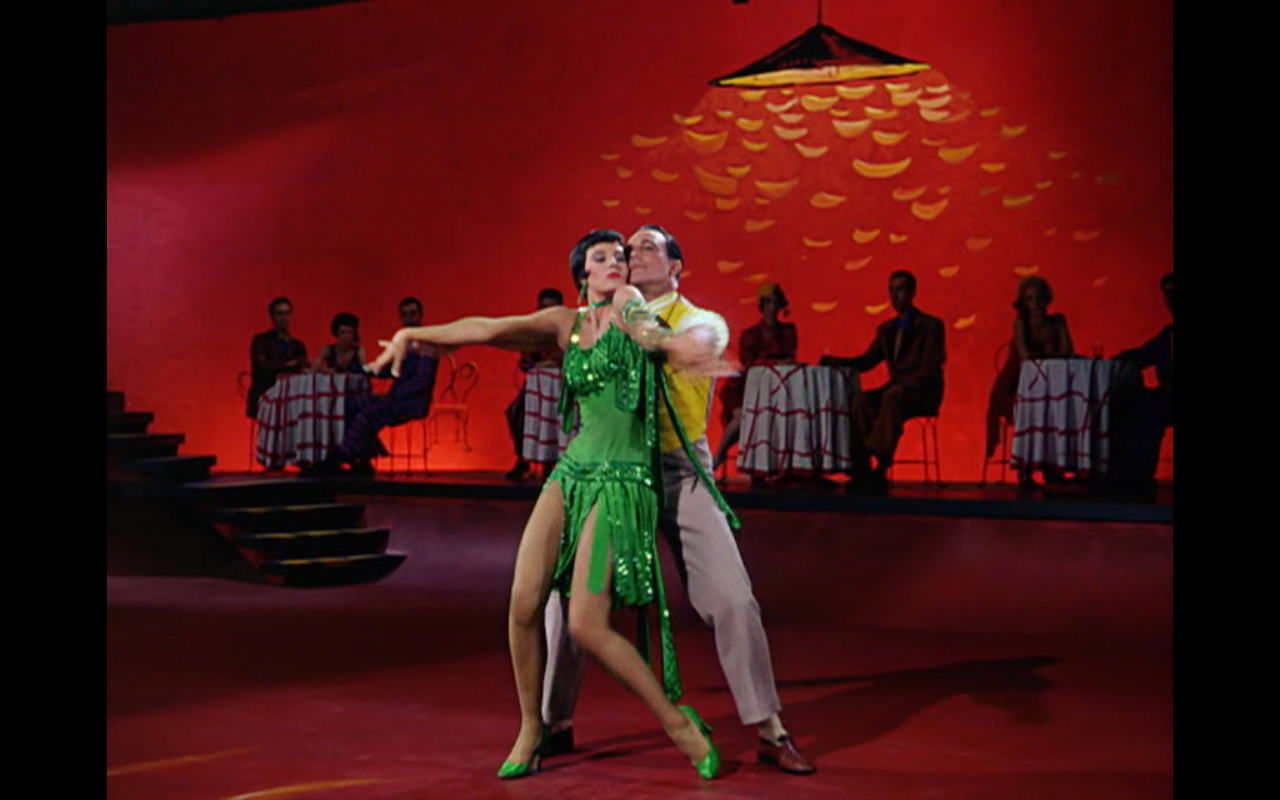 Obviously, Charisse’s costume isn’t anywhere near historically accurate, but it’s the feel I’m going for more than the actual look.

END_OF_DOCUMENT_TOKEN_TO_BE_REPLACED

So, obviously I enjoy attending costumed events, but dragging friends along with me is half the fun! And that generally involves my volunteering to make something for them so they have something appropriate to wear. And that brings me to this dress, which I made so that a friend of mine could accompany me to the annual historical costumers’ picnic I host every summer (or at least, this is the second annual, so I’m hoping to make it a tradition!).

Because 1920s-style dresses are the fastest and easiest historical outfits I know how to make, we decided to go with a basic day dress, very similar to the ones I’ve been making recently. She wanted something in navy blue, but I just couldn’t seem to find anything cute in that colorway or to think of any interesting design ideas until I came across this fantastic flamingo-print rayon voile, and it all came together!

END_OF_DOCUMENT_TOKEN_TO_BE_REPLACED 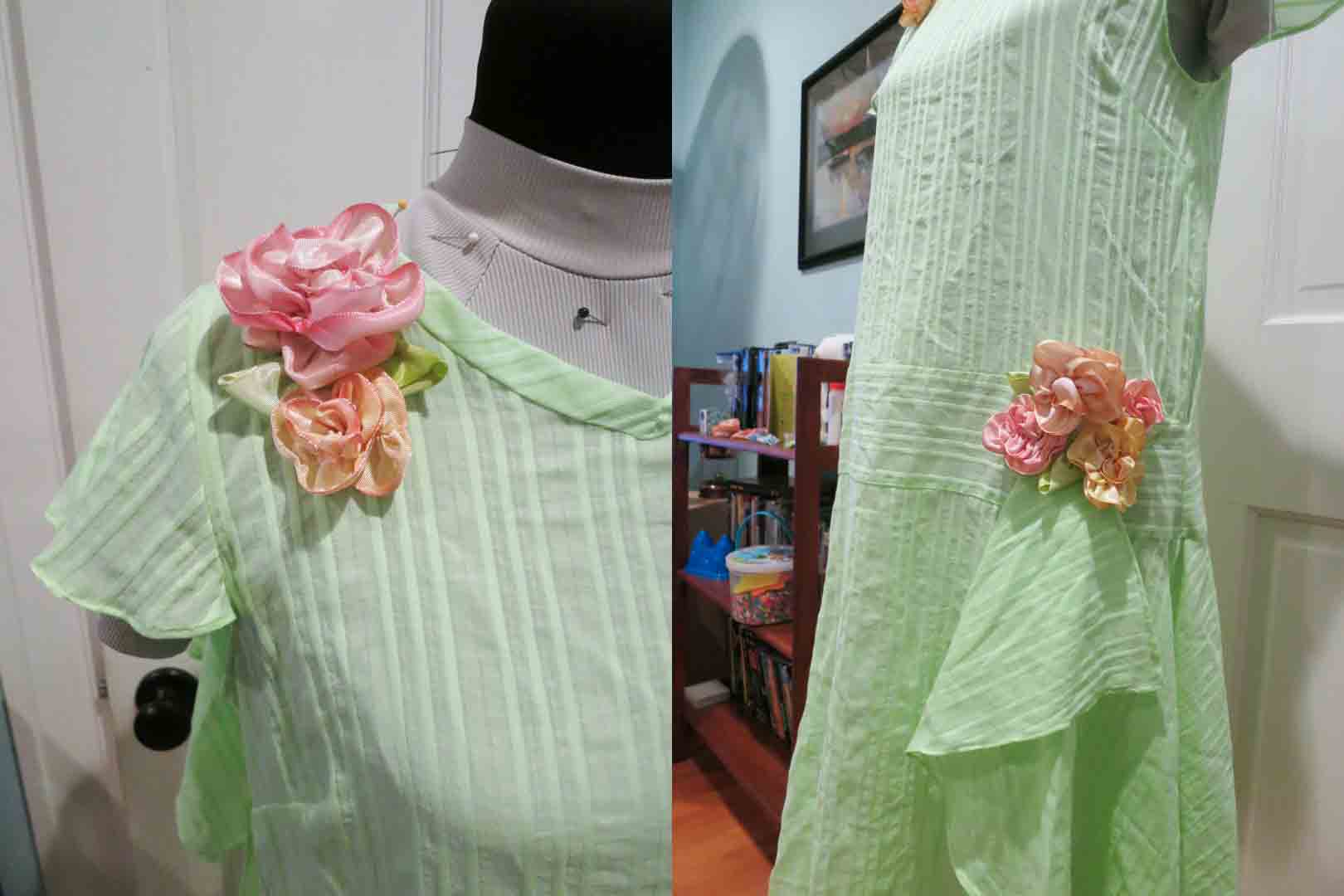 After finishing the body of the dress, I still had to decide on the floral embellishments at the hip and shoulder. My Etsy ribbon-flower appliques did indeed arrive in time, but they were kind of boring-looking– too pale, not enough color to them. Besides which, when I pinned them to the dress they looked a little off– too fancy compared to the simple fabric.

I decided to go in a different direction, making ribbon flowers out of ombre-dyed taffeta ribbon. And because I can never take the easy route to things like this, I decided to dye my own ivory ribbon rather than buy it pre-colored.

END_OF_DOCUMENT_TOKEN_TO_BE_REPLACED 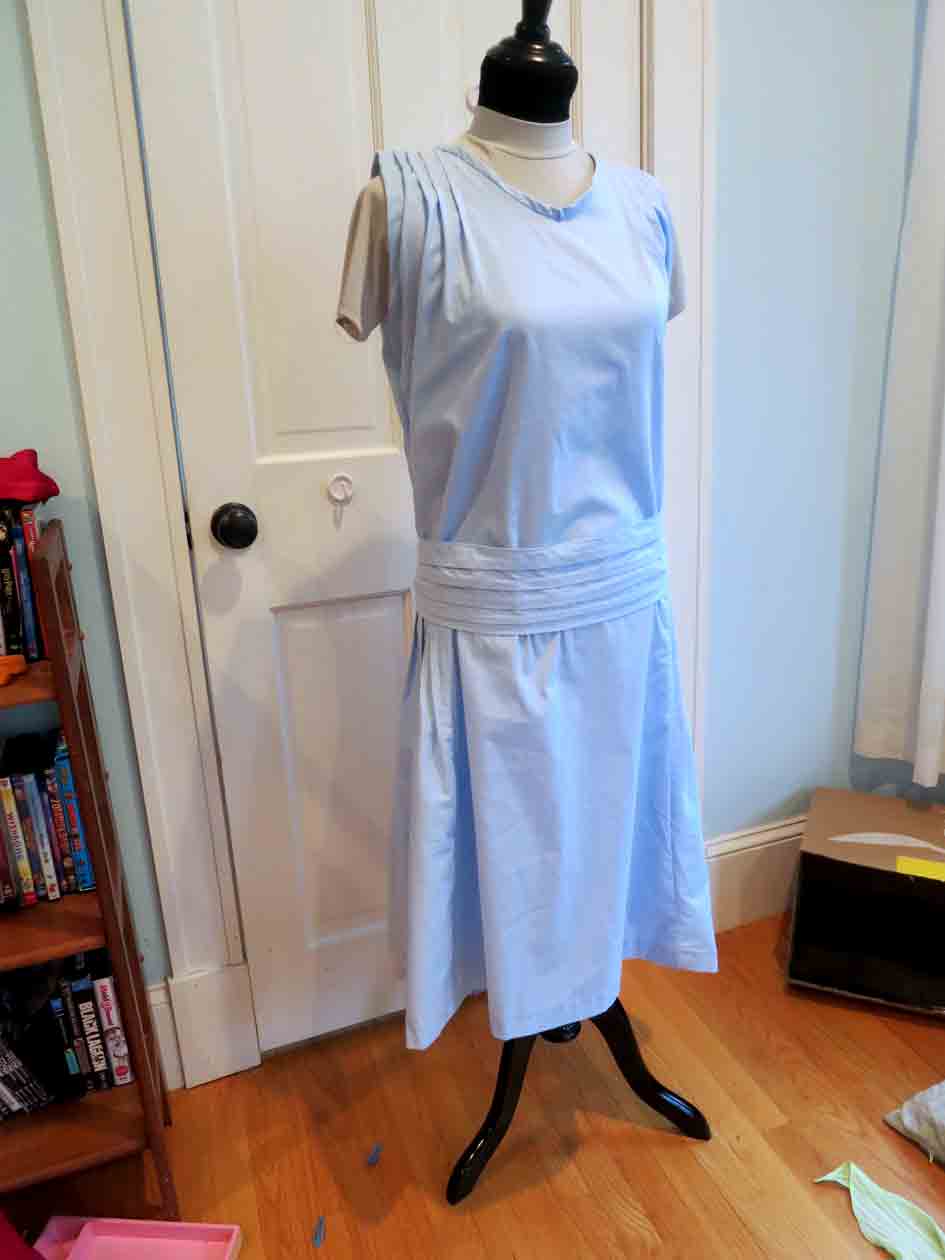 So while I was working out the bodice block pattern for my green 1920s dress, I did some experimenting to determine whether I wanted to do a pintucked detail at the shoulders. I thought that the tucks might be a good way to narrow the shoulders while still allowing more space through the torso and around the hips, so I gave it a try on an early mockup made of a blue cotton sheet, figuring I could always cut it narrower if it didn’t work out.

I started out by cutting my torso piece as a rectangle instead of a trapezoid– the difference meant that each piece (front and back) was about 4″ wider at the top than it had to be. To take in the extra width I stitched in four 1/4″ tucks on either side of the neckline before stitching together the shoulder seams, grading the tucks so they were longest towards the center and shortest towards the armholes. They actually looked pretty decent once the shoulder and side seams were done, and they did provide a little shaping in the shoulders that let the dress hang nicely without needing an underarm dart.

In fact, despite the fact that I eventually decided not to do pintucks on the green dress, I liked the effect so much that I decided I might as well complete the mockup, so as to have another option to wear to future events.

END_OF_DOCUMENT_TOKEN_TO_BE_REPLACED

Once I got all of my pieces properly cut out, assembly *should have* been fairly straightforward.  Do you sense foreshadowing here? Because you ought to. I’ll tell you now, after this series of disasters I went to bed vowing that I would just scrap the whole dress and wear the blue one instead… but the next morning I decided to give it one more try, and eventually managed to salvage the project.

END_OF_DOCUMENT_TOKEN_TO_BE_REPLACED

Unlike my last two 1920s dresses, I decided that I wanted to make this one with just a tiny bit more shaping than the standard “cut two rectangles and sew up the sides” that I’d been using before. I’d never really drafted my own pattern before for something like this, so I did a little reading and got started!

I started by digging out the mockup I’d made for my white embroidered dress— it was actually in reasonably good shape, so I laid it out on a roll of paper and drew out the basic rectangle pattern to begin. I cut it out of an old sheet, stitched together the shoulder and side seams, and tried it on. Not particularly flattering.

I decided that if I was going to omit the kimono sleeves from the original, I would need to narrow the torso around the bust and shoulders for a better fit– my hips are just too big to cut a straight rectangle and expect it to fit all the way up and down. After some experiments with pintucks (more on that in the next post), I ended up cutting a slightly trapezoidal shift dress, which fit a bit better but still pulled oddly at the sides and gaped at the armholes.

Based on a very useful tutorial I proceeded to pinch out a dart in the armhole, then rotate it around to the side seam. Cutting a final mockup, I was at last happy with the fit– somehow the added shaping at the bust helped the whole thing hang properly, so it was straight up and down both front and back, with no weird pulling at my backside or hips.

I transferred the new pattern to fresh paper so I would have it for future dresses.

Once that was set, I cut out my green striped fabric. And it was there that I made my first mistake. Or rather, my second, but I didn’t realize that until later.

END_OF_DOCUMENT_TOKEN_TO_BE_REPLACED

I can’t believe I never got around to posting about these shoes back when I was making the rest of the outfit! Okay, so these aren’t really 1920s shoes. They’re actually ballroom dance practice shoes– specifically, these:

I’d been looking for a pair of Oxford-style shoes that I could wear with my white 1920s dress to a lawn party, since it appears that the style was popular at the time.

I’d had my eye on some ballroom dance shoes because I liked the shape and the perforated leather and thought they’d look great with my outfit, but I couldn’t justify spending the money to get a new pair. Then, by sheer good fortune I found a used pair at my local Goodwill for $6 (basically a 1/10 of the original price), and they were exactly my size! I knew they’d be perfect, if not for one thing– the color.

I didn’t want black shoes– they wouldn’t go well at all with my summery white dress, and I was looking for something light and sporty. But they were so cheap and comfortable (can’t beat ballroom dance shoes for flexibility) that I decided that I would give paint a shot– after all, the shoes were inexpensive, they were leather (which meant they ought to be paintable), and it would only take an evening to finish the project.

END_OF_DOCUMENT_TOKEN_TO_BE_REPLACED

Like I said, I’m not a huge fan of the 1920s silhouette, but I was browsing eBay for beaded chiffon dupattas– the perfect source for inexpensive pre-embroidered/beaded fabric– to make an evening dress out of, when I came across this lovely item:

It wasn’t really right for the dress I had in mind, but for some reason I kept coming back to it. Something about the floral pattern, the burgundy/cream/gold color scheme, and the tiny sequins just made me think it would make a gorgeous flapper dress. Finally, I just bit the bullet and ordered it, and now that it’s here I’m so glad I did!