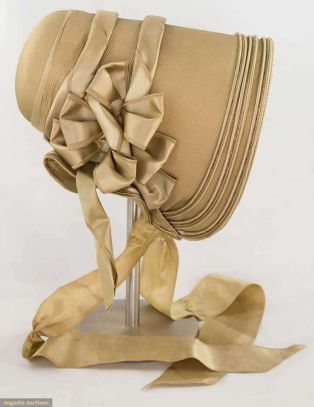 END_OF_DOCUMENT_TOKEN_TO_BE_REPLACED

Let me just start by saying that Dickens Fair was tons of fun– I can’t believe this is the first time I’ve attended! As always, I think that being in costume contributes immeasurably to my enjoyment of events. Here’s me posing in a bookshop at the Fair:

I accessorized the dress with a shawl, pair of brown vintage gloves, and a bonnet (next post!).

To provide the necessary dome-shaped skirt silhouette, I wore the dress over a crinoline/hoop combination skirt from eBay— it came with three hoops and a layer of stiff nylon netting over them. While actual 1840s dresses would’ve had multiple petticoats to get the right shape, I figured that I could lighten the load by using small hoops (I tightened down the circumference of the hoops by simply pushing them in and taping the loose ends down) with the netting on top– that way I didn’t need all of the layers. I’d have made a cotton petticoat to go over it all if I’d had time, but it just didn’t happen. Besides, I think that the netting softened the outline of the hoops enough that extra petticoats weren’t really necessary.

After I finished the main dress, I decided to add some decorative touches in the form of an antique lace collar and cuffs. I bought mine as a set on eBay, and while they may not be strictly period-accurate– I think the set is probably from several decades after the 1840s, at the earliest– they’re lovely and work well with the dress.

One issue I had was that the lace was extremely yellowed from age– I knew I’d have to whiten it somehow. Soaking in a baking soda solution did nothing, as did Woolite, so I brought out the big guns and soaked it for an hour in an OxiClean bath. That did the trick! A quick press with a warm iron and it was ready to use.

END_OF_DOCUMENT_TOKEN_TO_BE_REPLACED

After I finished my bodice, all that was left was the skirt! Laughing Moon 114 has a very basic skirt pattern– it’s just four panels of fabric, with a pocket option that I took full advantage of, hoping to minimize the things I’d have to carry at Dickens Fair. I drafted my own pocket pattern, though, since reviews concur that the drafted pocket is too deep to get your hands all the way into, which makes it less useful. I put it on the right front seam, which was a convenient location.

One thing I did was to cut my skirt slightly wider than the pattern– it was supposed to be three 44″ panels plus one more 13″ panel for a total of about 144″ once the seam allowances were accounted for. I thought a 13″ wide back panel sounded ridiculously narrow, but rather than risk going too wide for 1840s with four 44″ panels, I split the difference and made my fourth panel only about 30″ wide. Not sure if it really made much of a difference in fullness, but it turned out fine.

END_OF_DOCUMENT_TOKEN_TO_BE_REPLACED 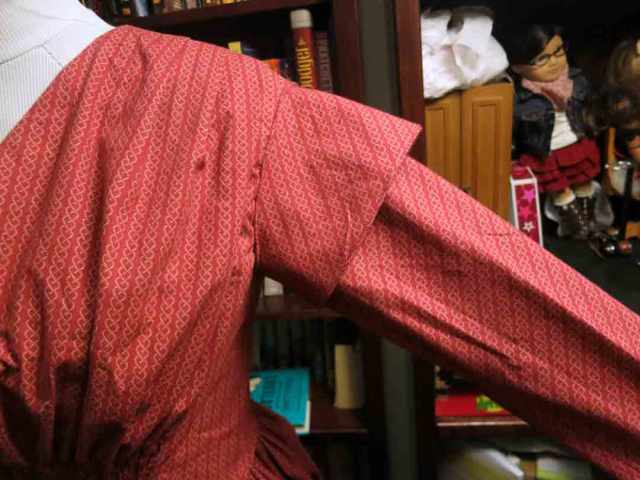 I chose to use the sleeves from View A of the Laughing Moon 114 pattern– short mancherons over tight, bias-cut long sleeves. While the pattern said that I wouldn’t need to line the mancherons, I didn’t like the look of them unlined– instead, I cut out identical pieces out of my fashion fabric and self-lined the mancherons before attaching them to the long, unlined sleeves.

I hand-basted the sleeves into the armscyes to make sure that all of the layers stayed where they were supposed to be, then machine-stitched over my basting. Then (important step) I clipped the curves on the armscye seams, allowing for more movement. The piping turned out looking great– such a nice tiny detail.

END_OF_DOCUMENT_TOKEN_TO_BE_REPLACED

Once I finished my mockup, it was time to cut into my fabric. I made the bodice lining out of ivory cotton sateen– it’s a nice, firmly-woven fabric that’s silky-smooth on one side, so perfect for sturdy linings. I couldn’t tell from the pattern whether the center front seam was supposed to be facing the right side or wrong side, so I made it face the wrong side. In retrospect, it probably should’ve gone the other way, to make the foldover neckline easier to do on the overlay, but it was fine. 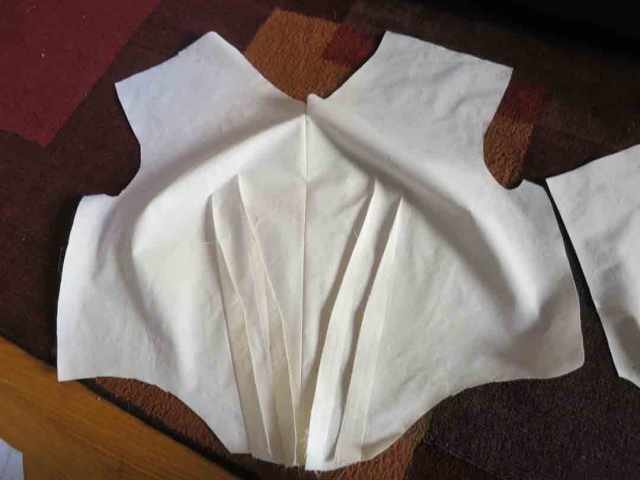 END_OF_DOCUMENT_TOKEN_TO_BE_REPLACED

Given my love of historical costuming, I often bemoan the fact that despite growing up in Northern California, which appears in retrospect to have been a Mecca of costuming resources and events, the only thing I took advantage of at the time was attending the Northern California Renaissance Faire (which was admittedly awesome). Now I’m in Massachusetts, where costuming events are less abundant and fabric stores are harder to get to. But as luck would have it, I’m going home for Christmas this year and I’ll be in the area for the last day of the San Francisco Dickens Fair!

As soon as I made plans to go, I knew I’d need a dress– nothing too complicated, and hopefully something that could be shoved into a suitcase without taking up too much space or sustaining lasting damage. Unfortunately, the event’s stated period (1842-1863) is smack dab in the middle of a gap in my costuming portfolio– I have nothing between 1815 and 1890. So I have to make something new.

Let’s just say it did not start off well.

I swear, this post took forever to write because every time I thought I had finalized my pattern/fabric choices, something happened to mess it up and I had to go back and update. Anyway, read on for the saga of “the Dickens Fair dress of indecision”…