One thing that I never seem to have the patience for when it comes to historical costuming is the underpinnings. As much as I like the idea of being dressed from the skin out in historically-accurate pieces, I can never muster up the energy to make them. Instead of chemises I wear modern cotton slips. Instead of corset covers I find lacy vintage-style cotton tank tops. Instead of a full crinoline and petticoats, I bought a cheap bridal hoop and safety-pinned an extra layer of stiff netting on top to disguise the bones. What can I say, it works!

However, even modern substitutes take up space, and especially when one is planning on attending a multi-day event with different outfits (can’t wait for Costume College 2021!), space is at a premium. I realized that what I really needed was a petticoat that I could use for different silhouettes depending on the occasion. Something that I could adjust at will, without compromising the integrity of the original.

I’ll say at the outset that the finished petticoat turned out reasonably well, with all of the necessary features, but if I could go back in time I’d do a few things differently. Read on to see how things worked out…

The first thing I thought of was a drawstring waist, which would allow me to move fullness from front to back– this way I could use the same petticoat for dresses with fullness all around (like my 1830s or 1840s dresses) and for dresses with flatter fronts and fuller backs (like my 1890s wisteria gown or black moiré dress). I made the waistline about 15″ larger than my actual waist, which gave enough leeway to shift some gathers around on the drawstring without being bulky when they’re all in the back. Annoyingly, when stitching the waistband and placket, I accidentally made an overlapping placket (suitable for a button or hook closure) rather than an end-to-end one (better for drawstrings), so the back doesn’t look all that great. Whatever, it’s a petticoat…

Anyway, aside from the shifting of fullness from front to back, skirts in different eras still have vastly different shapes to them– pre-hoop-skirt dresses are more dome-shaped, while post-bustle dresses are more trumpet-shaped. What to do? And then it hit me– as noted above, my favorite method of adding fullness to a petticoat is to add a ruffle of stiff netting, the way I did with my 1860s hoop skirt. And I recently discovered that snap tape is a great way to make a ruffle detachable. So why not add several rows of snap tape at different heights? Depending on where I placed the ruffles the shape of the skirt would change drastically, and I wouldn’t even have to ensure the ruffles were the perfect circumference because I could just fasten selected snaps to evenly distribute the ruffle around the skirt.

I decided to cut my petticoat in the same shape as the one I made for my wisteria gown— a trapezoidal front panel with a half-circle in back, figuring that it would allow for some nice fullness at the hem while keeping a smoother top. As it turned out, this was a bad idea that I’m kicking myself for now– I really didn’t need that full of a hem, and it created a lot of extra work for me with very little value. If I were doing this again I’d do a simple A-line shape and save myself a lot of time and effort. Sadly, I did not realize this until after I’d basically finished the petticoat entirely, and it was too late to change things. (sigh)

In order to give the hem a little support, I decided to add some cording. This may also have been more trouble than it was worth, at least when taken in conjunction with the extra-full curved hem. I’d read a bunch of tutorials about how to make 1830s corded petticoats, but every one of them started with a cylindrical skirt– i.e., sewing the cord in straight lines. I probably should’ve thought more about why that was the case, but instead I forged ahead, figuring that as long as I made a wide, curved facing to sandwich the cord, I’d be fine.

The facing worked fine, but sewing consistently on a curve is a *lot* harder than sewing in straight lines, particularly when you’re trying to get layers to lie smoothly on top of each other (around three-dimensional cording), and especially when your sewing machine will only let you adjust your needle sideways in ONE direction for the zipper/cording foot, which means that instead of having the bulk of the petticoat on the left (where there’s tons of space to maneuver), you have to squish it all under the arm of your machine in order to make your foot work right. Let’s just say it made for some less-than-beautiful seams. 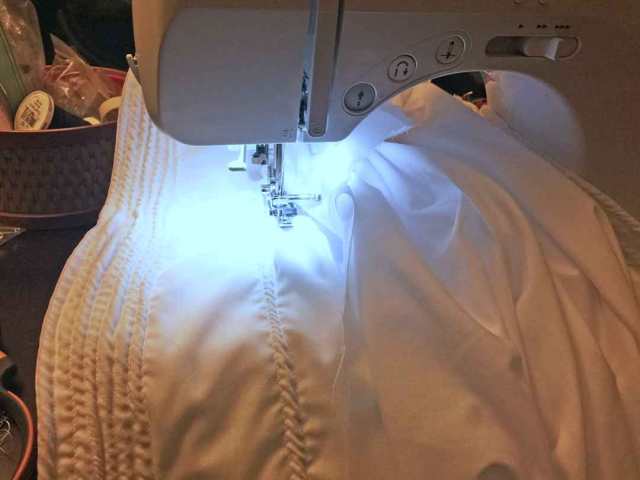 For the record, I used 3mm cotton cording (you can find it as “macrame cording” on Amazon and it’s $10 for 200 yards) in a continuous spiral for 7 rows at the hem, then left a vertical space of 2″ and added another 5 rows. Once the cording was in, I finished the hem by folding the raw edge to the inside and stitching it down. Whew!

The cording did add some nice stiffness to the petticoat– see the progression below– but the fullness of the hem allowed it to collapse in on itself, where a less-full hem would have given a better shape. I gave serious consideration to just cutting out a big section of the back to narrow the skirt down, but it would’ve messed up my waist-to-drawstring ratio, plus it would have been a huge hassle to deal with all the cording and I just didn’t have the energy to do it. So I chalked it up to experience and let it go. (I hate doing that)

Next, I got out my netting ruffles. I actually harvested them from the same Ebay bridal petticoat I got my other netting pieces from, and I had three of them in three different widths. I pinned them to my petticoat at different heights until I figured out where I wanted to be able to place them. Then I added rows of white snap tape to the skirt, machine-stitching them in place using my zipper foot (and breaking two needles in the process– careful!). I had a little trouble keeping the tape on a smooth, level curve (as you can see in the main photo), but it was close enough. Finally, I stitched the other sides of the snap tape to my netting ruffles.

If I distribute the skirt fullness all the way around and evenly distribute my ruffles between three levels of snap tape, I get a lovely bell shape, a la 1830s (it looks huge here but once the skirt is on top it softens and deflates a bit). If I push the fullness of the skirt to the back and attach two ruffles to the two bottom levels only, I get a nice trumpet shape, a la 1890s. 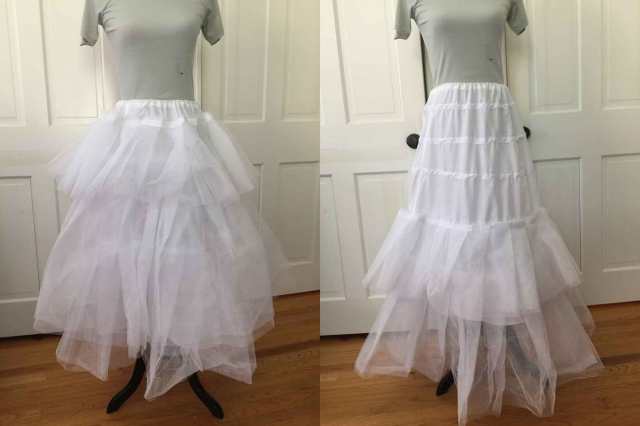 There are tons of other combinations I could use for different effects, and if I remove all of the ruffles I just have a basic calf-length petticoat! (an ugly one, but a petticoat nonetheless)

I will note that to make even distribution of ruffles easier, I marked the 1/4, 1/2, and 3/4 points of each ruffle with a Sharpie dot, and marked the center point of each row of snap tape on the skirt.

All in all, I’m glad I made this– I think it’ll come in very handy at future events, and it only took me a weekend so it’s not like it was hugely labor-intensive. However, I would definitely recommend using a basic A-line shape instead– it would be an easier way of achieving the desired shape, while using a lot less fabric, cording, and snap tape.

One thought on “Multi-Use Petticoat”