It’s no secret that I enjoy making elaborate Halloween costumes. But the first Halloween with our baby daughter, to my surprise, my husband agreed right off the bat to my first idea for a family costume– Mary Poppins and Bert, with the baby as one of the dancing penguins in the Jolly Holiday animated scene.

The Mary Poppins Jolly Holiday dress is iconic, with good reason– it’s beautiful, and probably even more recognizable than the standard outfit she wears for the rest of the movie. While I didn’t think I could replicate it exactly, I knew it had to be a white, full-skirted dress, with long sleeves, a frilly jabot, red ribbon accents, and a red waist cincher. Since I hate sewing garments from scratch (especially when they involve satin or other slippery fabrics), it was off to eBay to find an appropriate dress to use as a base.

Vintage wedding dresses are a great place to start for this kind of thing, and given the Victorian resurgence of the 70s, I knew I’d be able to find something appropriate. I ended up with a full-length, high-necked dress with sheer leg-of-mutton sleeves, so all I really had to do was take up the skirt to tea-length, and insert some fabric into the back bodice– it was definitely too small to fit me… darned vintage sizing.

I ended up inserting two panels in the back of the bodice, using white satin covered in white netting to maintain the same look all the way through. Then I took up the skirt at the waist in order to keep as much fullness at the hem as possible. The original waist was pretty high– much higher than my natural waist, but I figured the red waist cincher would cover that up.

I used some of the extra skirt fabric to make the jabot, which was basically just an oval of fabric that I gathered up the middle. I also did some loose gathering up the sides to keep it from flopping around too much. While the original dress appears to have the jabot in pink rather than white, I didn’t think I could pull off the color subtly enough, so white it was. Then I ran red ribbon through some lace for accents, and added wider red ribbon bows at intervals on the skirt.

For the waist cincher, it was a lot easier to find a full-length corset in red satin than to find it in the shorter length. So I just cut it to the proper length, then took out the spiral steel boning and replaced it with heavy-duty zip ties cut to the right length. Then I sewed bias binding around all edges to encase the raw parts. I also glued white double-fold bias tape over some of the boning channels to simulate the piping from the original costume.

Since it was Halloween season, I easily found a wedding gown petticoat at Goodwill, and used Jacquard iDye Poly to dye it pink in my washing machine. It turned out a little darker than expected, but it was still fine. I chopped off the drawstring top, shortened it, and added a wide piece of elastic for the waistband.

The shoes were actually nothing like the movie originals– in the movie, Mary Poppins wears white heeled boots. Not willing to buy a pair of white granny boots, I opted for a pair of red low-heeled pumps, worn over white stockings with red buttons sewn up the sides (like spats).

The accessories were easy– I bought the parasol on Amazon and it was perfect as-is. While the movie parasol is lined in pink I didn’t bother with it, nor did I try to mold a flamingo head on the handle. For the hat, I simply found a cheap straw hat, spray-painted it with several coats of white spray paint, and then added white tulle for the chin strap. While the movie hat has no flower decoration, I added silk flowers in white and red to make it pop a little.

So there was the Mary Poppins costume. Next up was Bert! 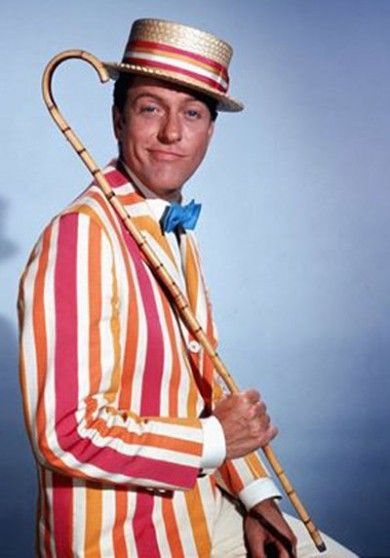 First up was finding a white suit jacket for my 6’3″ husband to wear as the base for the costume. Then I had to figure out how to do the stripes. Some people had sewn ribbons (usually before sewing the jacket together), but I decided to go with fabric paint (Jacquard Textile Color, it’s great stuff). I carefully taped off stripes on each section of the jacket, and got to work. It took forever, since I had to let one side dry before moving on to the next panel of the jacket, but I finally finished with JUST enough yellow paint to spare.

The sky-blue bow tie was simple to make, and I found striped ribbon for the boater hat with no problem. We didn’t get a cane, but since one of us was going to have to wrangle the kid it was easier if both weren’t carrying accessories.

Anyway, those were our costumes for Baby’s First Halloween. Of course, she’s almost seven years old now and has been choosing her own outfit for years, but it was nice to be able to choose for her while it lasted!