One of the things about making an above-the-ankle Edwardian day dress is that you suddenly have to care about your shoes. My previous Victorian/early Edwardian gowns were mostly long enough to hide my feet almost entirely, so the shoes didn’t stand out as long as they were a neutral color and shape. But my Edwardian picnic dress is intended to show some ankle (scandalous!), so shoes matter.

Of course, I already knew where I’d love to get my shoes– American Duchess. I’ve been drooling over her stuff for ages. But as much as I adore her gorgeous footwear, particularly the Astorias, they’re not really in the budget right now given how infrequently I’d wear them. So I turned to the cheap knockoff version made by Funtasma– the style known as Dame 02.

Check out the American Duchess shoes (left) vs. the Funtasma shoes (right): 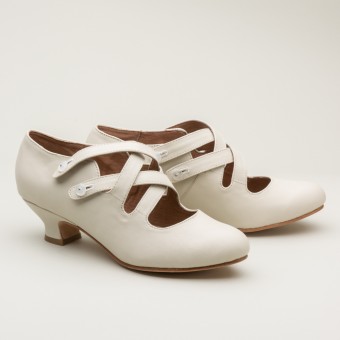 Honestly, at first glance they’re pretty similar. Of course, when you examine them more closely it’s clear that there are significant differences. Color, heel shape, leather vs. plastic… but most notably, the American Duchess shoes have working buttons on all four straps, all of which you can move to get a perfect fit across your instep. In contrast, the Funtasma shoes only have two non-functional buttons that are attached by elastic loops– the other two straps are stationary with some short sections of elastic to allow for a little stretch. The result is that the straps are just long enough to allow you to wiggle your foot into the shoe, but once your foot is inside the straps stick up a good half-inch over your instep and don’t lie smoothly across the top.

Many reviewers of the Funtasma shoes reported this problem, and a good number said that it was a deal-breaker for them, but I don’t give up that easily.

I determined that the real problem was the extra height that the stiff elastic loops gave to the two buttoned straps. Even if I pulled the straps down the length of the loops so they lay flat against the shoe’s surface, they’d work their way up again in no time (and in the meantime the buttons would flop unattractively around). I considered trying to cut them off entirely and to instead stitch snap closures to the straps, leaving the faux buttons in place– but I didn’t relish the thought of trying to push my needle through the plastic shoe enough times to securely attach the snaps.

It occurred to me then that the loops were so big that they could easily slip over the straps themselves– if I could detach them from the buttons, they could actually form part of a functional closure. It was harder than I’d expected to pry the metal button shanks apart to slip them off the elastic, but eventually it worked.

I slid the buttons off of the elastic, then pushed the elastic loops over the ends of the straps. It seemed to work! The shoes were now slightly easier to put on (now that I could unfasten two of the straps), and I could pull the straps snugly across my instep afterwards.

Of course, I knew that the elastic wouldn’t just stay put without something to hold it in place, so I put new buttons in place right where the originals had been. I’d planned on re-using the original buttons, but not only were they easily dented by a fingernail (something about the softness of the faux leather), but I also kind of destroyed the wire shank on one of them when I was first removing it, so it wasn’t really an option. The new buttons looked good– surprisingly like the ones on the Astorias– and were much sturdier than the old ones anyway.  I used strong upholstery thread to make a two-headed button, kind of like those button cufflinks you find on nice shirts sometimes. The top button was decorative, the bottom button was small and flat*, just enough to keep from slipping through the hole.

Now, the elastic loop was held in place by the new button!

The shoes still aren’t perfect– the two remaining stationary straps make it a bit tricky to wiggle my foot into the shoe, and of course they’re still made of plastic so they aren’t exactly ultra-comfortable– but they fit reasonably well and look pretty nice, all things considered. I’m going to consider this a success!

For what it’s worth in terms of fit, I wear a straight size 8 and the Funtasma shoes fit well– enough space in the toe box for my ever-so-slightly wide foot, and while I wouldn’t have said no to an extra quarter-inch in length for extra roominess, it wasn’t enough to make the shoes uncomfortable. So if you want to try tweaking these yourself, they fit pretty true to size.

*Note: the flattest buttons I’ve found are made of iridescent shell. Metal buttons might work too, if you can find them. Standard plastic shirt buttons are surprisingly thick for their size, and they do not work here– look for flatter ones to minimize the profile of the finished strap.