I started off by just tweaking the shape of the hat slightly, running some hot water over it and shaping it over a kitchen canister like I did with my cowboy hat Regency bonnet. I pushed the crown up so it domed a bit, making more room for the head, and bent the brim down a few degrees so it wouldn’t flip upwards like a sombrero anymore. Interestingly, this completely solved the “crown is too loose” problem, and it was perfectly wearable (even without puffy hair) from then on.

Then I decided that I wanted to try something a bit more creative. In reviewing some vintage hat advertisements I particularly liked the shape of the one in the lower left corner of this ad: 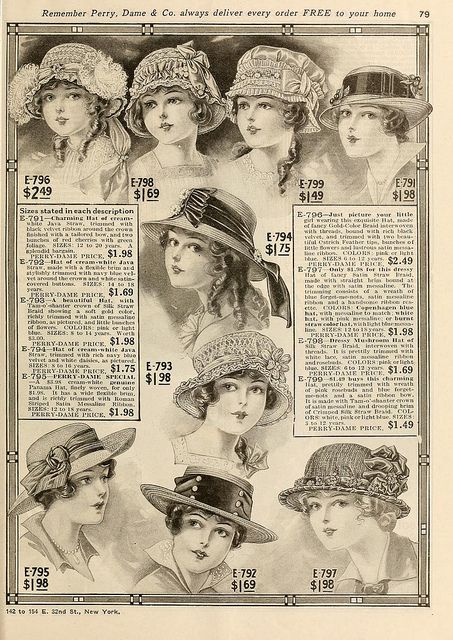 I wet the hat again, put it on, and rolled the brim up on one side in a curve. I kept using my hands to coax the hat into the rolled shape as I hit it with a blast from a hair dryer to keep it in place. The hat didn’t get completely dry at this point, but the shape was set enough that I felt comfortable leaving it overnight to dry the rest of the way. Once dry, it was set firmly in place.

Note: this technique works much better with woven hats than with hats made of sewn rows of braid, because the weave has a lot more “give” to it compared to the stitched braid, which is constrained by the thread. That being said, I’d have preferred a slightly narrower straw– this one was pretty coarse, since it was just a costume hat.

I also decided that I didn’t much care for the greenish color of some of the straw, and gave the hat a quick wash of diluted beige paint, sealed with diluted Mod Podge (original satin finish, not gloss)– the thin paint allowed some of the natural straw color variation to show through, and the Mod Podge mimicked some of the natural shine without making it too plastic-y looking. (no picture because it’s hard to depict the subtle difference in color)

At this point I determined that the inside of the crown was getting a little rough– in order to keep the straw ends from catching on my hair, I whipped up a quick lining from some of my original canteloupe-dyed voile. I basically made a tube of fabric and hand-stitched the edges around the inside of the crown (the stitching will be hidden by the hat band once I add it), then pleated the rest of it so it lined the crown nicely. I tacked the pleats down with tiny stitches that don’t show much from the top of the hat, and while the inside isn’t the neatest it’s adequate for my needs.

To decorate, I decided to keep things simple and just make a band with a big, fluffy bow. Easy, right? Well, kind of.

First I made a wide band of the voile with narrow-hemmed edges and wrapped it around the crown, tacked down in a few places with hand-stitches to give it a casually gathered look. I overlapped the ends halfway between center front and the non-rolled side of the hat and stitched them down.

Then I wanted to make a bow. A big bow. A big, exuberant bow. The only problem was, my fabric didn’t have nearly enough body to make such a bow, and I didn’t want to go to the trouble of locating wired ribbon to match. So I had to make my own.

First I cut a long strip of my fabric and zig-zagged both long edges to finish them. Then I took some craft wire (24 gauge) and ran it along each long edge, folding a tiny hem to enclose the wire and then carefully stitching along it to make sure I didn’t accidentally hit the wire with the needle. I probably could’ve done this in one step, zig-zagging over the wire, but I was too paranoid about breaking my needle.

Once I was done stitching the wire into the fabric, I had another problem– the fabric was too flimsy. It sagged between the wires and buckled unattractively rather than keeping its shape.

I shouldn’t have been surprised– it’s a very fine lawn, so it doesn’t really have any natural body– but I definitely had to do something about it. I decided to try starching the ribbon to give it some stiffness– a quick search online uncovered a recipe for homemade starch made from Elmer’s glue. You just dilute it using 1 tbsp. of glue per cup of water, and then dip your fabric into it and let dry thoroughly. Once it’s dry the fabric will be stiff, and ironing it smoothes out any residual wrinkles and leaves the stiffness in.

I used it to make the loops of a nice big double bow, which I stitched to the hat to cover the ends of the hatband, and I was done! I love this bow so much– it’s so light and airy and it sets off the hat perfectly.

I will definitely remember the wire-and-starch technique for making wired ribbon in the future. Not sure how well non-cotton fabric would take to starching, but I’m sure I can think of something! And even if I’m restricted to cotton, I can’t think of a cheaper way to get 5″ wide wired ribbon in the color I’m looking for.