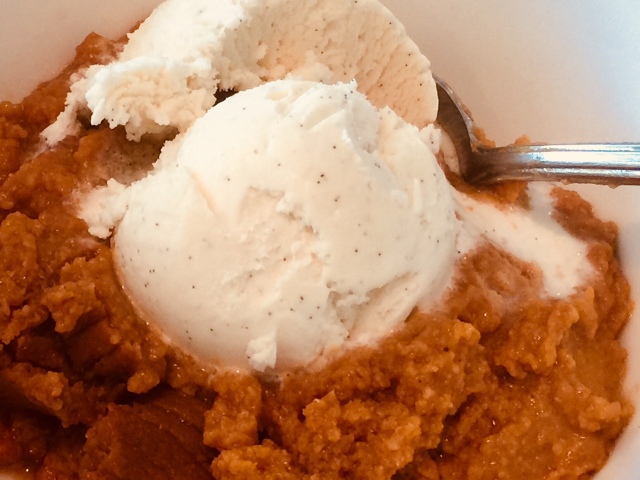 I will note at the outset that this is “Indian Pudding” as it’s made in New England– basically an enriched and sweetened cornmeal mush, baked in the oven until thick– rather than a pudding of the style made in India (which can include pumpkin). I basically decided to make it on a whim during a recent snowstorm, figuring it would help combat the cold, wintry weather outside.

I’ve never actually liked Indian Pudding in its original form– it’s not really sweet enough for me and it’s kind of one-dimensional. I decided to make it more interesting by the addition of pumpkin purée, as I love pumpkin pie and figured the pumpkin would go well with the flavor profile of the standard pudding recipe. The resulting pudding is (for me at least) the ideal breakfast food– it’s warm and comforting, with more heft than regular pumpkin pie (and all the flavor) so you don’t feel guilty about eating it for breakfast!

The process is a bit time-consuming, what with the constant stirring of the milk-cornmeal mixture– it reminds me of that scene in The Witch of Blackbird Pond where Kit undertakes the laborious task of making corn pudding:

Toward evening they set her at the easiest task they could devise — the making of corn pudding. The cornmeal had to be added to the boiling kettle a pinch at a time. Before half of it was consumed, Kit’s patience had run out. The smoke made her eyes water and there was a smarting blister on one thumb. She suspected that Judith had invented the irksome procedure just to keep her busy, and in a burst of resentment she poured in the remaining cupful in all at once.

I didn’t add my cornmeal a pinch at a time, but I did have to stir it frequently to keep the milk from burning and to allow the cornmeal to thicken. I can’t imagine how hot and annoying it would be to do this over an open fire rather than on my gas stove!

2. Bring milk to a simmer in a 3 or 4-quart saucepan. (yes, it does need to be this big to make room for the remaining ingredients)

3. Slowly whisk in cornmeal and continue simmering until mixture thickens into cream of wheat consistency, and the cornmeal gets tender.

4. Add molasses, maple syrup, salt and spices, and continue simmering for another minute.

5. Remove from heat and stir in pumpkin. Add beaten eggs, and whisk well.

6. Add butter and stir until melted.

7. Pour mixture into buttered dish and bake for 60-90 minutes, or until the center jiggles but does not slosh, and a knife inserted midway to the center comes out reasonably clean.

8. Cool at least 30 minutes before serving.