This frosting really is fantastic– it’s light and creamy, silky and smooth, and it has a nicely chocolate-y flavor without being cloying.

Unlike my favorite Vanilla Frosting, which has a thickened flour/cornstarch base sweetened with granulated sugar, this frosting uses powdered sugar for sweetness; however, it avoids the underlying grittiness of powdered sugar frostings by dissolving the powdered sugar in a cocoa slurry made with boiling water. The result is a perfectly smooth frosting without a trace of grit– plus, the water itself cuts the butteriness of the frosting and allows it to whip up into a light and fluffy mass that’s perfect for spreading over a cake. I really just can’t say enough wonderful things about this frosting, so go ahead and make it for your next cake– I promise you won’t be sorry.

1. Melt chocolate in heatproof bowl in the microwave in 30 second bursts, stirring between each until there are only a few lumps left– keep stirring until those are gone and then set aside to cool to room temperature– it shouldn’t take long, since you’re relying on residual heat only to melt the chocolate by the end.
2. In the bowl of a stand mixer (with paddle attachment), blend confectioners’ sugar, cocoa, and salt. Slowly pour the boiling water over the mixture with the mixer on low speed. Add corn syrup and vanilla. Once combined, increase the speed to medium and beat until sugar is dissolved and mixture is at room temperature (about 2-3 minutes).
3. Add the melted, cooled chocolate and beat until well incorporated.
6. Add the butter and shortening a few tablespoons at a time and continue beating until light and fluffy, about 8 minutes. 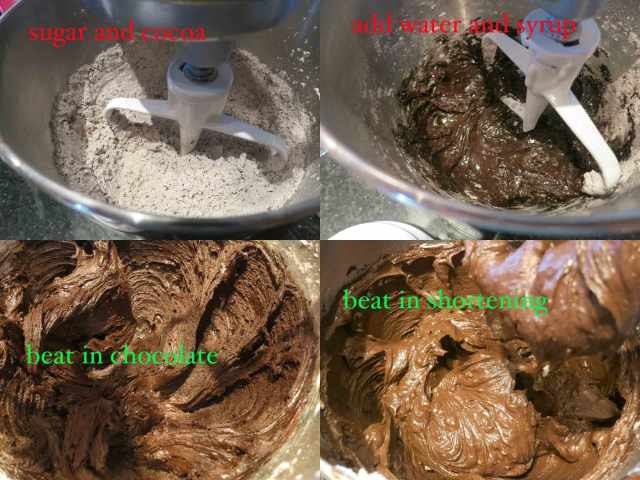 Here you can see how much it lightens in color once it’s beaten until fluffy.

6. Use immediately, or if you want it a little firmer place it in the refrigerator for about 20 minutes, stirring every 5 minutes so it chills evenly.
Notes:
1. The original recipe called for 1/2 cup of boiling water, but when I used that amount the frosting was extremely loose and silky. Not that it’s a bad thing, but in this instance I needed it to be a bit sturdier so it would hold up for a birthday party. If you want a lighter, more ethereal frosting, feel free to use the full 1/2 cup of water.
2. You can substitute Lyle’s Golden Syrup if you don’t like corn syrup– the toasty flavor would be nice (if it were noticeable at all), and the texture would work just as well.
3. This frosting is surprisingly light in color after being whipped, especially compared to the dark chocolate flavor. The weirdest part is that after I refrigerated the leftover frosting overnight and then brought it back to room temperature, it was much darker in color. Perhaps some of the air bubbles pressed out during the chilling/thawing process, making it denser and therefore darker? Either way, it tastes great, so I wouldn’t let the color stop you from making this. Just be aware that if you want a nice, dark brown, you’ll probably have to chill and then thaw (or maybe just whip less to begin with).

One thought on “Creamy Chocolate Frosting”