Once I finished my mockup, it was time to cut into my fabric. I made the bodice lining out of ivory cotton sateen– it’s a nice, firmly-woven fabric that’s silky-smooth on one side, so perfect for sturdy linings. I couldn’t tell from the pattern whether the center front seam was supposed to be facing the right side or wrong side, so I made it face the wrong side. In retrospect, it probably should’ve gone the other way, to make the foldover neckline easier to do on the overlay, but it was fine.

I sewed 3/8″ boning channels into the darts, and used plastic (gasp!) boning cut to size, because I didn’t have any metal bones available. At least this way the dress will be washable.

Next up was the overlay. Based on several other bloggers’ accounts (thanks, Fresh Frippery and Frolicking Frocks!) of using Laughing Moon 114, I knew that I’d want to sew more lines of gathering for the fan-front than called for in the pattern. The pattern called for seven lines, half an inch apart, but I went with twenty lines, 1 cm apart, bringing the gathered section just up to the bottom of my ribcage in the center. I’m not 100% certain that I like it quite that high– I may pull out the top few rows later, once I’m able to see the whole dress. But pulling out gathers after the fact is a lot easier than putting them in. In retrospect I think I should’ve kept the rows 1/2 inch apart instead of 1 cm– the fabric is so thick that the more narrowly-spaced rows looked a little off. But I still like the effect.

It was really useful for me to trace each stitching line directly onto the fabric so I could be sure my lines were parallel– the great thing about quilting cotton is that it has a light-colored back that shows pencil easily!

I chose to hand-stitch the gathering, which (while tedious) was a good choice– I really had to pull hard on the gathering threads to get things tight enough, and I was glad to have two threads rather than the one that I would’ve had with machine-gathering. For the actual gathering, I pulled two rows’ worth of thread at once, then tied the pairs of loose ends together to keep the thread the correct length. First I tied them in bows so they were easy to alter, then once I’d done all of them and confirmed the right tightness of gathering, I tied them in firm knots.

For comparison, here’s what it looks like with only seven rows shirred, compared to twenty rows:

And here it is from the right side! (sorry for the blurry focus) 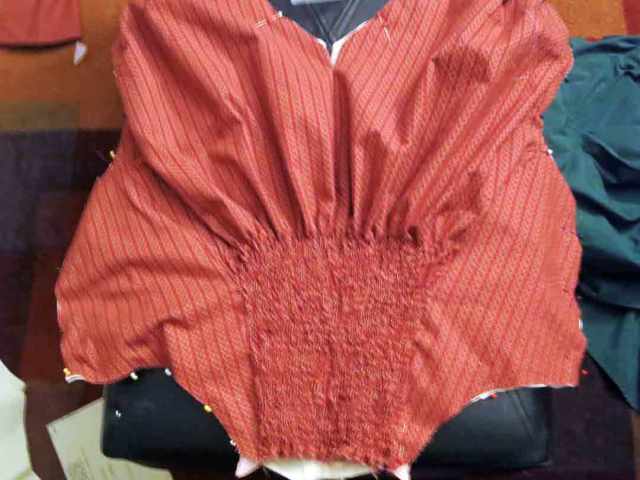 In retrospect I probably should’ve tried a bit harder to pull the bottom section more tightly and the top section more loosely, to get a more triangular shape in the shirred panel– as it was, the panel ended up looking a bit blockier than I’d have liked. The thickness of the quilting cotton might have had something to do with it– it didn’t gather down very tightly– but then again I was pulling the rows to fit the lining, so maybe it wouldn’t have made a difference?

Instead of gathers at the shoulders I decided to do pleats so I could control the shape better– I did three pleats at each shoulder, facing outwards.

Per instructions, I made piping (first time for everything!) and piped the bottom edge of the bodice and the armscyes. I was surprised that the armscye piping went in first, rather than at the same time as the sleeves, but kind of relieved, too– I’d been concerned about stitching in all the layers of fabric at once– with the bodice, lining, both layers of the piping, the mancheron and mancheron lining, and the sleeve, that’s seven layers of fabric to keep track of!

I re-shaped the bottom edge of the bodice to round off the center a bit when I was piping it (I probably should’ve made it a bit pointier rather than making it rounded, but I’m not invested enough in the change to unpick all of the piping now). I was a little concerned that the thickness of the gathered center section would make that part of the hem hard to press, but once I’d machine-stitched my piping and hand-stitched the inside edge, it turned over quite nicely and looked great.