Our family is going to Disneyworld this fall, and my daughter is (of course) really excited about it. Not just the rides and attractions, but the prospect of meeting Disney princesses. When we first booked the tickets, in a fit of recklessness I promised to make her some princess dresses to wear to the park, so here we are. These aren’t going to be full costume-quality dresses– rather, they’re going to be soft and comfortable knit dresses she can play all day in, with some nods to the princess style.

Her very favorite princess right now is Elena of Avalor, so it was a given that one of her dresses would be Elena’s.

As you can see, Elena wears a red dress with a white underskirt and pink/light red ruffles on it. To avoid re-inventing the wheel, I started with a sleeveless red dress from Primary.com, which is a fabulous resource for solid-color knit pieces at a good price. For the ruffles, I harvested the fabric from two pink knit shirts from Primark (lowest prices ever, perfect for costumes). I also got an men’s XXL white t-shirt to use for the underskirt.

First, I cut a slit up the side of the dress’s skirt, trimming away the corners to make the curved opening you can see above. I also cut off the top of the bodice just above the shoulder line. I roughly measured the edges, which would all have to be decorated with ruffled trim. I figured that I’d need about 120″ of trim, as a generous estimate (it always pays to be generous when figuring out trim, since it’s better to have too much than too little!).

From the image it’s pretty clear that the ruffles are circular ruffles like the ones on my Ursula/Vanessa dress; however, once I’d cut a test arc of fabric I realized that the knit fabric was starting to roll up along the grain (as t-shirt knits tend to do), and it just got worse over time, destroying the shape of my ruffles. Since I don’t have a serger there was really no way for me to fix this issue, so I decided to go with standard ruffled straight strips instead. I figured that the curling could be prevented by hemming the straight strips (far easier than hemming on a curve), but unfortunately this proved not to be the case– it kept rolling up no matter what.

What to do? After a little experimentation I determined (A-HA!) that cutting the strips on the bias would prevent rolling edges. Voila! Take that, annoying knit fabric!

Anyway, I figured that a 2:1 ruffling ratio would work nicely to get pretty ruffles, so I needed about 120″ of strips out of each shirt. I tried to reduce the amount of piecing I’d have to do by cutting the strips to wrap around the shirt, taking advantage of the side seams. Luckily, cutting the bias strips from the body of the shirt resulted in just about the right amount of fabric.

I sewed the strips together on my machine using a ball-point needle, trimmed the seams down, and then ran long basting stitches along the length with my sewing machine to gather up the ruffles. I worked in sections so I wouldn’t have to worry as much about my thread breaking. I stitched the trim all around the hem of the red dress (wrong sides together), then flipped the ruffles out to the right side. I trimmed the width to make the ruffle narrower as it went up towards the waistband in the front.

Then I laid the dress out over the white t-shirt and cut out a roughly triangular panel to fill in the front slit. I could’ve made an entire underskirt, but that would’ve made the dress overly warm, I thought. I could also have made a panel that just took up the entire front of the skirt rather than just the triangular section, but I was worried that the extra weight in the front of the skirt would make the dress hang funny. 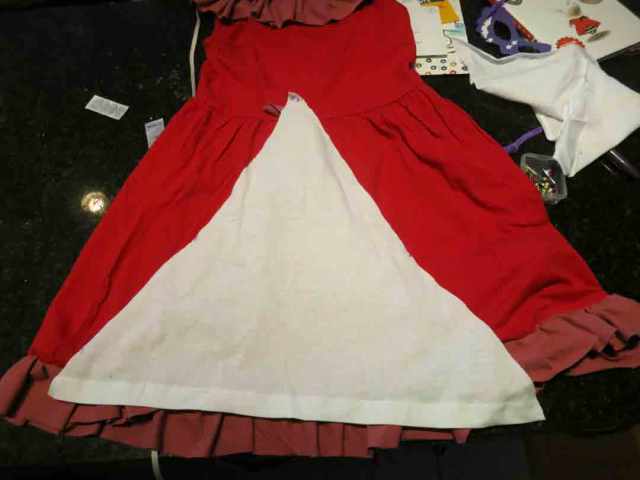 To make the shoulder ruffle, I took more of my ruffled pink trim and stitched it flat along the neckline, leaving the raw top edges exposed. Then I cut one of my bias-cut strips in half lengthwise and used that to bind the edges of the trim and neckline together, sandwiching a length of thin elastic into the binding. The elastic helped shape the shoulder ruffle and keep it comfortably on my daughter’s shoulders.

Finally, I made a belt out of a piece of black and gold trim from my stash. I added a small snap to the back to keep it closed, and sewed belt loops to the sides of the dress so it wouldn’t get lost.