As I said in my earlier post, I had just finished the sequined swags on the sides of the gown (which took a few tweaks to get right), and was about to start embellishing the center panel when I realized that I had a problem. While some of the movie stills quite clearly show that the center panel is covered in sequins, other shots make it look like there are far fewer sequins, and still others imply that any sequins aren’t really that prominent at all.

Here, there are tons of sequins visible, all looking the same color silver as the side swags:

Here, however, they’re not so obvious, especially in the lower portion of the gown where it appears that the short silver line segments and larger silver paillettes stand out from the background– something that couldn’t happen if the background were full of silver sequins:

And here you can barely see any sequins at all in the center, despite clearly visible silver sequins in the side swags and in the bottom line segments: 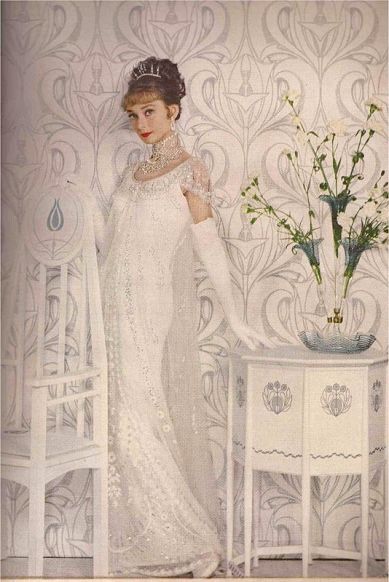 If there really are silver sequins all over the front panel, how can the silver sequins in the straight-line embellishments be visible at all among all the rest? Why does the center panel look plain white if it’s covered in silver sequins that should be reflecting either dark or light shades? It couldn’t just be a lighting issue, could it?

I puzzled over photo after photo, since so many of them seemed to contradict the others. Finally, I concluded that while it was possible that the sequins were silver and just not visible in most shots because they were reflecting the enormous set lights trained on Hepburn during the film shoot, I would not have the benefit of similar lighting all the time. Therefore, in order to get the effect of having sequins that would sparkle in some lights and recede into the background in others, I would have to dispense with the opaque silver sequins and use more translucent sequins instead.

As you recall, I was very pleased with the look of the moonshine sequins I’d used for the neckline and sleeve edges, and I hoped that they’d work as well for the center panel. But the more I thought about it, the more I realized that in order to keep the whole gown consistent-looking I’d need to use moonshine sequins for all of the glued sequin areas, even the side swags. But was it even possible to change them out since I’d already glued them ages ago?

As it turns out, the answer was yes. It was possible (though tedious) to pry the silver sequins off of their little pads of dried glue, add a drop of new glue, and replace them with new moonshine sequins. To assist in the prying (and in the removal of any particularly nobbly bits of glue), I turned the overdress inside-out and put a drop of acetone-based nail polish remover on the back side of each glue dot. After letting the acetone sit for about 10 minutes I pried each sequin off, taking off as much glue as I could manage with it. Sometimes I would pull extra glue off from the back side as well.

Once the old sequins were gone, I put more glue on top of the dried glue spots and put on new sequins. The new ones were a little thicker-looking due to the extra layer of glue, but they worked and were less visually obtrusive than the silver ones while still being visible when the light hit them.

Re-doing the sequins on the side swags was a pain, I’ll admit it. It wasn’t the gluing part that was hard– that was actually easier than the first round because the already-set glue dots allowed me to dispense with the “squeeze a dot of glue, wait a minute, squeeze another one and place the sequin” process. But peeling off all of the glued-on sequins took forever, and my fingertips still ache. I clearly did too good of a job the first time!

So, reading this I know what you must be thinking– I’m insane. Insane to first apply over a thousand sequins by hand, only to decide later that they need to be individually removed and replaced. Why not just leave well enough alone? Well, I figure that if I’m going to be spending hours and hours doing a replica of the movie gown, I ought to be completely happy with it when I’m done– not thinking in the back of my head, “it would be perfect if not for those darned sequins.” I’m not looking to please anyone but myself– honestly, no one is going to be as much of a stickler for detail as I am, particularly as I’ve spent hours poring over source images and they haven’t.

And I really do like the final version– the moonshine sequins are nicely sparkly when the light hits them, and look dark from the correct angle (like the source images), while receding into the background from other angles. They make the swags on the sides of the dress look more delicate and less costume-y, and the tiny rhinestones between them add more texture and look fine even though they’re now darker than the sequins themselves.

For the center panel itself I ended up concentrating the sequins along the lines formed by the round appliques, and filling in the areas between them with sparser sequins. I will note that once I was putting sequins on an entirely new area rather than replacing old ones, I found that the “glue dot, let dry, new glue dot” was unnecessary– instead, I just put down a single glue dot and let it set for about 2 minutes, which in most cases rendered it tacky enough to hold the sequin securely without the need for more glue. A good time-saver!

Getting so close to being done! I just have to add the final accent rhinestones and paillettes! (some of which you see above because I actually did a few things in a different order than described earlier)