I recently co-hosted a baby shower for a friend of mine, who was expecting a baby boy. Seeing as she and her husband are huge Star Wars fans, we decided to make the shower space-themed. Of course I was in charge of desserts, and one of my contributions was this batch of planet cookies.

I started off with my favorite chocolate cutout cookie recipe, which I cut into circles of varying sizes and baked. Then I made a batch of my cream cheese fondant and tinted it yellow, blue, green, and red.

It took a little experimenting to figure out the best way to marble the fondant attractively, but I found that I got my best results (swirly lines) by flattening out each color into a flattish snake, layering them together, rolling them up like a cinnamon roll, and then rolling that spiral out flat.

When I ran out of pretty areas to cut out, I flipped the fondant over to see if there were any nice stripes on the back.

I adhered the fondant cutouts to the baked and cooled cookies using corn syrup diluted with a teaspoon of water. 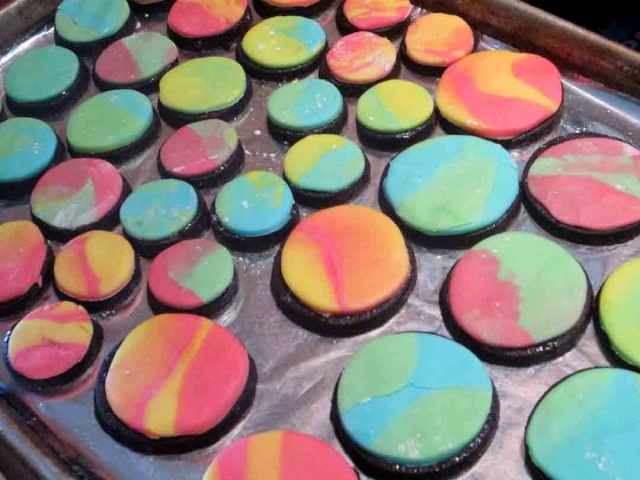 I think they look great!