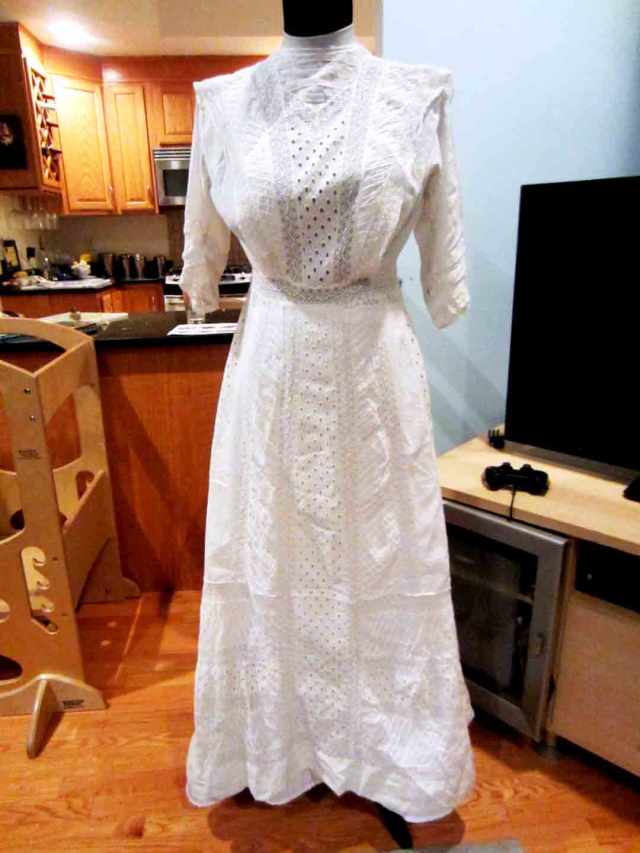 So that antique Edwardian dress I mentioned earlier? Before I could wear it (shown above before I did anything to it), it needed to be altered. It just needs a few inches of extra room to make it perfect, and since I can’t make up the difference with a corset (there’s only so far you can cinch down your waist… or your ribcage), I’ll have to do it the hard way.

I know, I know… there will be people out there gasping in horror at how I could dare to alter an antique— but come on, people have been repurposing older garments forever, including making over old dresses to suit new modes of fashion, so I hardly think that merely tweaking a dress to enlarge it and make it wearable for the modern figure is that much of a problem.

Besides, it’s not like I’m repeating the mistakes I made in college when I actually went so far as to add an elastic waistband to an antique embroidered skirt (still cringe about that one). Anyway, here’s how I did it:

The original dress measurements were just about 2″ smaller in the bust and waist than I needed them to be (it could theoretically button but would be skin-tight and would not allow for breathing or moving my arms), the bodice was just a teeny bit shorter-waisted than I prefer, and the whole thing was about 4″ too short. 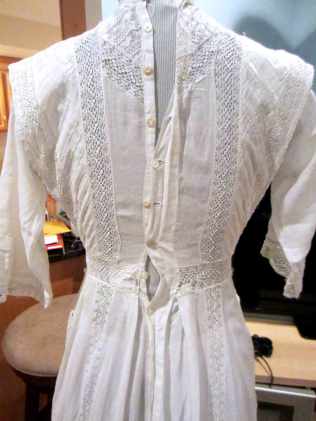 Luckily for me, upon examining the dress I discovered that someone had taken in a deep tuck in the skirt to make it shorter– once I had painstakingly unpicked all of the stitches (it took forever) the dress was significantly longer, though still about an inch or so shorter than I would have liked. And I still needed to fix the bodice.

The problem with trying to enlarge a dress like this is that the seam allowances are minuscule– as you saw with my post about insertion, once you’ve sewn in your seams you trim them to 1/8″ and finish them together, making it basically impossible to undo the stitching. Additionally, I didn’t have any precisely matching fabric that could duplicate the “white but not bright-white” color of the antique dress. Luckily, the design of the bodice was going to help immensely in my quest.

See those wings of fabric down the sides of the dress, front and back? They’re actually separate pieces that overlap the pleated bodice base, and the great part is that they’ll hide any seams or inserted panels of new fabric. Plus, I had the good luck to come across a batiste baby dress at a vintage clothing booth– because it had a hole in it the price was really low and I could afford to buy it just for the fabric, which provided a reasonable match for the texture and color of my antique gown! Score! I had enough fabric to cut out tapered panels to insert under the “wings” to widen the bodice front and back.

I unpicked the waistband from the bodice to allow for the addition (it took forever because it was lace) and decided to cut along the inside seams under the wings, leaving a 1/4″ seam allowance for me to attach the new panels. I pieced in my strips of fabric, zig-zagging over the raw interior edges to finish them. After all of the piecing, the bodice was 5″ wider at the waist– too much, but I re-did some of the pleats to bring it in to a reasonable width. It was also about 8″ wider at the bust, but that wasn’t a problem because I wanted the bust to blouse a little, as per the fashion. It was also 8″ wider at the shoulders, which was not so good, but I took in some tucks along the shoulder line to bring the shoulders back in to the correct width. This allowed for plenty of room in the torso for the “pigeon-breast” look that was popular at the time, without making the bodice too loose at the shoulder.

On the skirt side, the expansion was much simpler– there were already some small pleats in the back that I just let out to expand the waist to fit the new bodice width.

However, I still had the problem of the waistband, which was still the original length (and which was fraying in some parts in any case) and could not be expanded. Also, it was just a bit high on the torso for me. I decided to try to solve two problems at once and replace the 1.5″ wide waistband with a wider (and longer) one. I split the original waistband lace in half, then filled in the gap with some vintage entredeux trim that coordinated in style with the original elements of the dress. 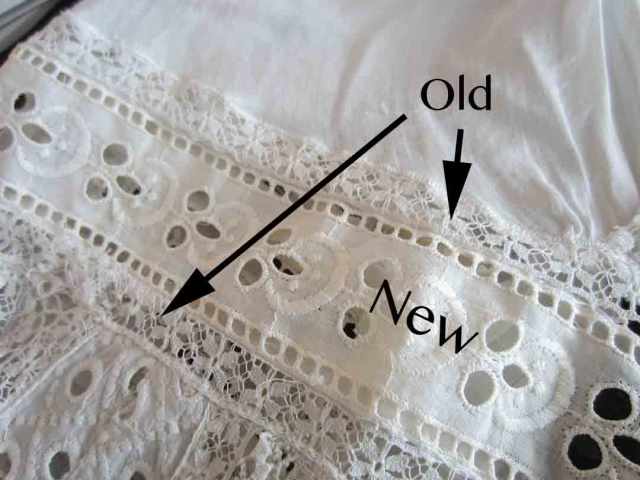 At the back of the dress, where the original waistband wasn’t long enough to reach around the new waist circumference, I continued the new entredeux trim and used a narrow vintage trim to bridge the gap where the lace should have been. I figured that with a white slip under the dress the difference between the original and new trims wouldn’t be all that noticeable in any event.

The addition of the entredeux to the waistband made the waistband itself– and by extension the entire dress– 1″ longer. It was still a bit short in front, but it was close enough!

There is now plenty of room in the bust and waist– I actually left an extra inch or so in the waist, figuring that a looser fit wouldn’t be end of the world and would allow for a little wiggle room in case my figure changed in the future. I’m very happy with this dress, and was thrilled to be able to wear it!

2 thoughts on “Altering an Edwardian Dress”