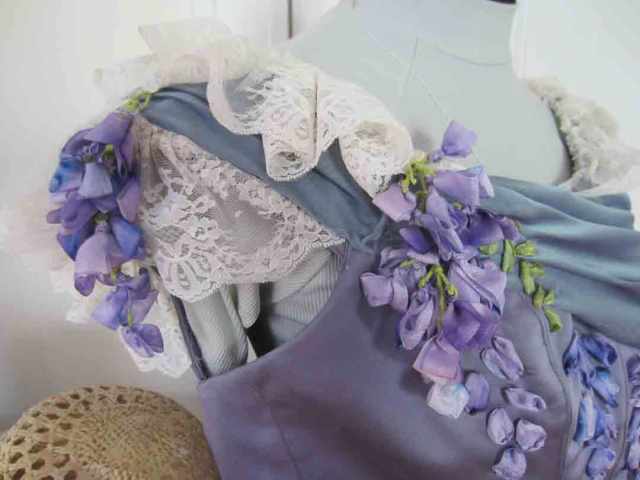 Once I had the embroidered wisteria designs finished, I decided to create a few three-dimensional wisteria blossoms to use at the neckline of the gown. The problem was, I wasn’t sure how to do the stems– the blossoms would be simple, just looping seam binding and using thread to bind the tops together, but the stems were a puzzle. If I used regular embroidery floss they would be too droopy and wouldn’t have any structure. If I used wire they would be too stiff. I thought about fishing line, but then I’d have to tie it all up together and find some way to make it green, and it sounded like a huge hassle.

I finally bought some green cotton cord that was on clearance at my local craft store. It had some structure to it, and I figured that it would strike a nice balance between stiffness and flexibility.

Here’s the process for making the wisteria sprays:

First I cut a length of green cord about 9″ long to form the central stem of the spray. I cut eight shorter lengths to form the blossom stems (about 5″ long), and tied them at intervals along the cord using single knots.

Then I cut several lengths of purple-dyed seam binding, about 4″ long. Folding the ends towards the center, I hand-stitched it into a loop with the center tacked down.

Keeping the thread attached to the binding, I tied one end of a short stem around the center of the binding loop, folding the loop in half over the twice-knotted cord, then winding the tail end of the thread around the top several times to hold it (and the free end of the green cord) in place. Then I just tied off the thread and trimmed it short. I did the same for the other end of the cord to make a symmetrical pair of blossoms. This order of operations allowed me to carefully control the length of the cord stem on each blossom based on where I placed the knot– each end of the stem was kept to about  1/2″ for best results… any longer and they’d droop too much, any shorter and they were hard to manage. 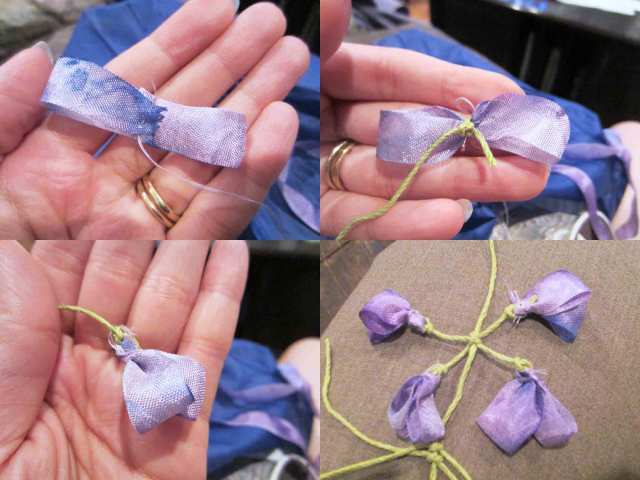 I continued on until I’d added 16 blossoms (eight sets of two) to the main stem. At the very bottom of the stem I just used the end of the central cord to tie one last blossom for a total of 17.

I adjusted the height of the blossom stems on the central stem by sliding them up and down, then used white glue to fix them in place to keep them from sliding further or unknotting. 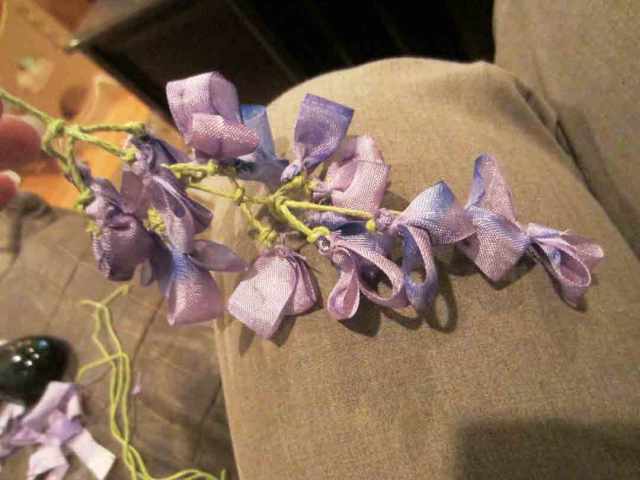 Honestly, this process is long and tedious. Each individual blossom takes only a little time, but there are just so many that you can spend up to 45 minutes on a single spray. For that reason (and also because I was running out of green cord) I only made three sprays– one for each shoulder and one on the front of the bodice.