To really get the elegant silhouette of an 1890s ballgown I needed a good petticoat to go under the skirt. Just like the skirt, it would be relatively narrow at the top with a really wide hem for maximum swishiness. I made it out of 5 yards of white polyester taffeta.

I wanted the back to be fuller than the front so it would provide a nice sweep to the back of the skirt, so I cut a flat A-line front panel, with a half-circle back panel.

At this point the circumference of the skirt was 200 inches. To make the hem stand out even more I attached an 8″ wide facing made of petticoat netting harvested from the bridesmaid dresses to the bottom of the petticoat on the inside (luckily for me the original netting was already cut on basically the same curve as my skirt). Then I cut 8″ wide strips of taffeta, pinked the edges, and sewed them together into a long strip (400 inches). I gathered the strip about 1.5″ from the top using zig-zag stitching over a piece of dental floss, and sewed it on top of the netting on the inside of the petticoat, adding even more volume to the hem. I completely stole this idea from Natalie at Frolicking Frocks, because it looked like such a great and period-looking way to get the shape I was looking for. I had to use petticoat netting rather than the more period-correct tarletan (impossible to find!)– it may not have been quite as stiff, but it seemed to work reasonably well. 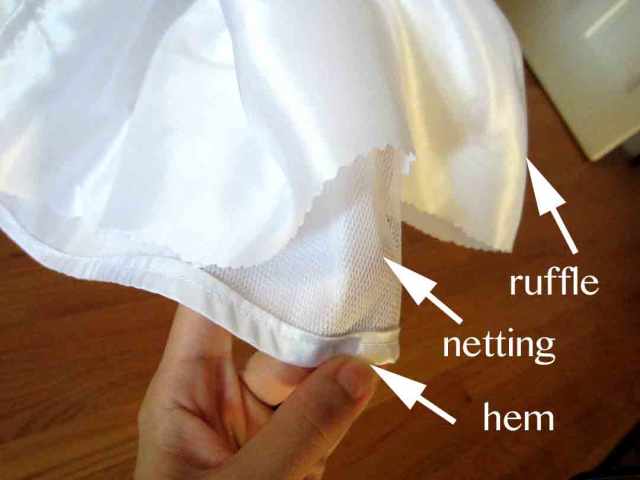 I added a waistband to the top, and it was all set. However, when I put it on under the dress, it didn’t really do that much to fill out the skirt. (before and after below).Sure, it looked slightly more supported, but didn’t have the shape of the inspiration dresses. 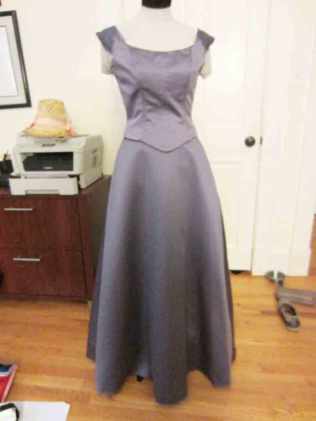 To boost the volume a little more, I took the skirt lining of the original bridesmaid’s dress, which still had its flounce of petticoat netting attached, and attached a waistband to it. Once I put that under the white petticoat it helped a lot to support the correct shape for the skirt.

I have a picture of the dress with the two petticoats under it, but by the time I took it I had already started adding embellishment to the outer skirt, and I don’t want to spoil the reveal! You’ll just have to wait…