I started with the invitation, which was designed and printed by an Etsy seller (great job, by the way), and then I added a party favor in the form of a fish-themed accessory– hair clips for the girls, pins for the boys. To make them, I ordered a set of 20 sequined felt fish appliques in different colors on eBay, and hot-glued them to snap clips or pin backings– so easy. I just attached them to the envelopes when we handed them out. 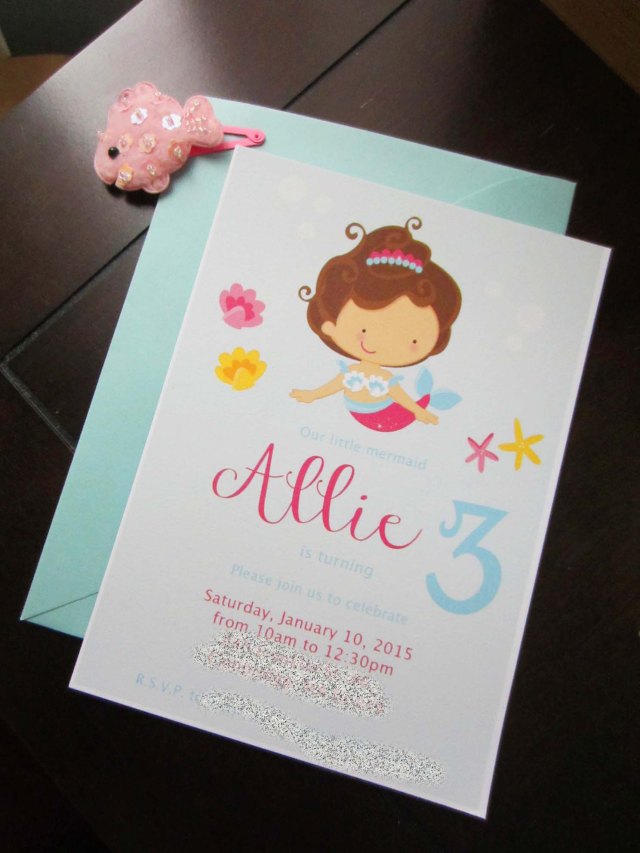 I knew I wanted to do a turquoise and purple cake, and at first had grandiose plans about a fondant mermaid cake topper, but eventually decided to go with white chocolate shells, tinted with luster dust, to keep things simple. I made them with white Wilton candy melts, and a few shades of luster dust from Sugarcraft.com. I also used pearlized chocolate candies as bubbles. To smooth the sides of the cake tiers, I put each one on a cardboard cake circle 1″ larger in diameter than the cake (leaving 1/2″ all around), piped generous amounts of frosting all along the sides, then used a turntable and a bench scraper to scrape off the excess frosting with the cardboard as a guide. Then I just kind of fussed around with the top to get it as smooth as possible.

As part of the cake display, I bought a large white plastic shell, originally intended as a bowl, from Oriental Trading, and mounted it on a small cardboard box, which I wrapped in burlap and propped up behind the cake.

The main table was covered in aqua crinkle cotton with silver threads, and since I didn’t buy quite enough fabric I also used some ivory velveteen and some more burlap for a beachy feel. I scattered more chocolate shells and some candy “pebbles” around the tabletop.

I had a lot of fun decorating the mermaid cookies– they’re actually made with a fish cookie cutter, which I turned on its side to make the mermaid shape. I used this sugar cookie recipe and a “royal glaze” icing to frost them, hoping to get the dimensionality of royal icing and the softer texture of glaze. As could be expected, it half-worked– the icing was slightly softer than royal but not as tasty as glaze, and only kind of held a shape. In any case, it still looked good, and the wet-on-wet technique I used for the scales on the tails worked just fine.

Of course, I also made other ocean-themed treats, including madeleines (how could I not?), a spinach dip with a bell pepper octopus in it, and tiny octodogs! Those were really simple– you just cut a standard hot dog in half, then slice the lower 2/3 of each half into eight vertical segments with a paring knife. Then lower them into boiling water for about 2 minutes, or until the legs curl up and the hot dogs are heated through. These are perfect kid food for parties or school lunches. I found that turkey dogs are easier to cut (smoother texture), but beef dogs curl up slightly better in the hot water.

Finally, to entertain the kids, we set out a big plastic tub full of clear water beads, scattered with plastic fish. These beads are amazing– for $9.99 you get a tiny packet of beads, which you soak in water overnight to turn into gallons and gallons of jelly-like bubbles. Everyone thought they were amazing, we sent home ziploc baggies of them as party favors, and even after several weeks they’re still hydrated! According to the package you can dry them out completely and re-use them later. Definitely a fun activity.

1. The sugar cookie recipe above really is the best. It doesn’t spread as long as you freeze your cutouts before baking. I made these cookies a week ahead and froze them, unfrosted, between sheets of parchment paper in a ziploc gallon bag. I defrosted on Friday morning, iced them Friday night, and they tasted great for the Saturday morning party.

2. The icing recipe calls for food-grade glycerin, which you can buy at cake decorating stores online. People online warn not to get your glycerin at the drugstore since it’s not food-grade, but I found food-grade glycerin at my local grocery store in the health food aisle– it was labelled for use as a sweetener, so it was definitely meant to be ingested. Much cheaper than the stuff at the cake decorating store, and I didn’t have to pay shipping.

3. The faces on the mermaids are done in edible marker after the icing was completely dry. I really love food coloring markers for details like this.

4. Do not microwave your octodogs. Just don’t. They get ruined by a series of tiny explosions as the fat pockets heat up, and while the legs do curl, boiling water is just so much easier. And neater. However, if you’re in a rush you can heat your water in the microwave, drop in your octodogs, then continue to heat in the microwave until the legs curl up. The water prevents explosions.

5. Although some people suggest brushing your chocolate molds with luster dust before pouring the chocolate in, to get the color onto the shells, I tried it and didn’t like the effect. It wasn’t shimmery at all, and the color hardly showed up. Dry-brushing the shells with dust afterwards did let the dust rub off a little, but most of it stayed on and it looked really nice. I tried mixing the dust with vodka to make paint, but that didn’t work at all– it just beaded up on the surface and looked terrible. So stick with dry-brushing for subtle, shimmery color.

6. You can make nice edible “sand” by mixing crushed graham crackers with turbinado sugar– the crystal structure of the coarse brown sugar adds a nice sparkle to the crackers and makes the “sand” look much more realistic.

7. I use this frosting recipe for almost all of my cakes– it’s my very favorite, and it’s perfectly light and creamy without being too buttery. However, its one flaw is that it doesn’t go on perfectly smooth like a standard powdered-sugar buttercream does. See those tiny little holes in the surface of my cake? Those are air bubbles, and they’re impossible to eliminate completely. Personally I think it’s worth it, but if you’re looking for a perfectly smooth, fondant-like surface, this recipe is not for you.