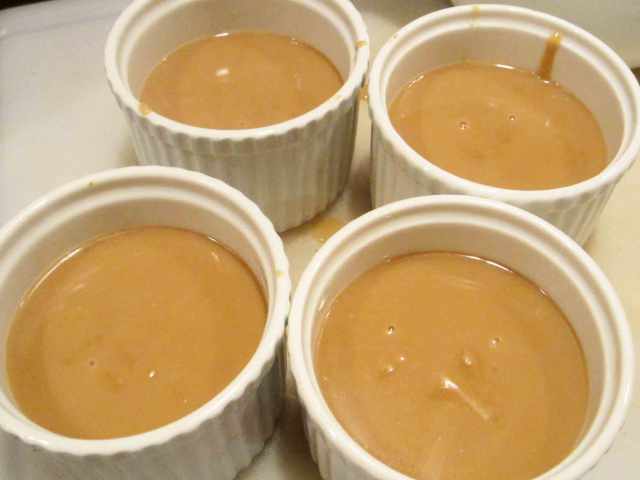 So after making the eggnog I had a pint of whole milk leftover, and since we never drink whole milk (and since I have an aversion to throwing perfectly good food away), I had to think of something to make with it. I thought pudding might be nice– it’s one of the only things I use whole milk for– but I was out of eggs and didn’t have enough chocolate in the house for a really good chocolate pudding, so I turned to a tried-and-true source of recipes and found (drumroll please) butterscotch pudding.

It sounded fabulous– the warm, toasty notes of dark brown sugar, combined with the sweet creaminess of pudding– and looked simple to make. In reality I experienced a few problems, probably because I didn’t trust the recipe enough.

Example: I tasted it before it thickened properly and it seemed so bland (probably because the cornstarch was still raw) that I added an extra 1/4 cup of brown sugar, which ended up making it a bit too sweet. Also, I poured the hot pudding into ramekins when it seemed pretty thick, despite it never having reached the mandated “simmer,” and that resulted in a slightly thin final product (the added sugar may also have had something to do with it). Not soup, but just a little loose for pudding. Next time I will follow the recipe religiously, I promise!

Notwithstanding the above, the pudding was still pretty darned good. I can’t figure out how the toasty, almost oatmeal-y flavor resulted from just brown sugar and vanilla, but I like it!

1. Melt the butter in a medium saucepan, then add brown sugar and cook at medium-low for 1-2 minutes. The recipe says it’ll bubble up, but when I made it the 1/2 cup of sugar was too much for the small amount of butter and it stayed looking like damp sugar– not liquid enough to bubble.

2. Reduce heat to low. Add salt and cornstarch, stirring until combined. Again, recipe says it’ll be a thick paste, but mine was still dry, especially with the added cornstarch.

3. Switch to a whisk and add the milks in a thin drizzle, whisking the whole time so that no lumps form. Once all of the milk is added, you can switch back to a spoon or spatula. 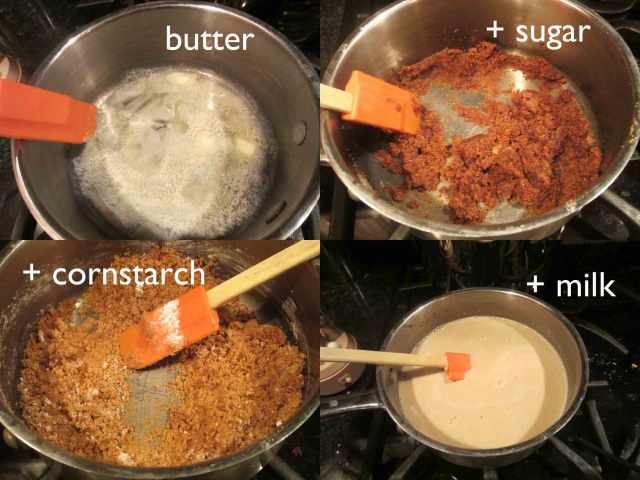 4. Cook over low to medium-low, stirring frequently, until the mixture comes to a gentle simmer. This will take forever, though the pudding will thicken to the texture of pourable ganache pretty quickly. This is NOT GOOD ENOUGH, so keep cooking. Let it simmer for a full minute, stirring, as it gets even thicker.

5. Remove from heat and stir in the vanilla extract. Divide into glasses or pudding cups and let chill in fridge for 1 to 2 hours, until set.

One thought on “Butterscotch Pudding, Kind Of”