I grew up reading a lot of classic kids’ stories by British authors, and one thing that it took me some time to adjust to was how the characters would eat “pudding.” Remember, to an American kid, pudding means “thickened dairy-based concoction, usually flavored with chocolate or vanilla, often served in individual cups.” But these British puddings were clearly not the puddings of my childhood. For starters, “pudding” appeared to be an all-purpose word for dessert in general, so kids in the books would ask “what’s for pudding,” much in the same way people in certain areas of the U.S. might ask “what kind of Coke do you want?” to refer to flavors of sweetened carbonated beverages. In other contexts, puddings were described as “steaming hot” and being served in “slices,” which didn’t jibe with my idea of pudding at all. The most commonly-referenced type was plum pudding, served at Christmas, and get this– it was often set on fire???

Anyway, while the idea of a flaming dessert was of course intriguing, I never gave it much thought until recently, when I was challenged by a friend to make “Christmas pudding” this year. How could I say no?

A quick google search pulled up Nigella Lawson’s “Ultimate Christmas Pudding” recipe, which looked pretty straightforward (except for the two-part steaming step, which we’ll get to later), and which actually looked like something I might enjoy eating. So I decided to give it a shot with a few revisions.

First, I cut the recipe in half, because it supposedly makes a whole mountain of pudding and I wasn’t about to eat it all myself. Next, instead of suet I used vegetable shortening, frozen and then grated for the proper texture. I didn’t have a plastic pudding basin (and getting one on Amazon was kind of extreme for a one-shot deal like this), so I made do with a metal mixing bowl tightly covered with foil and parchment paper. And finally, rather than cooking the pudding in a pot of steaming water, I followed some commenters’ advice and used my slow cooker set on low, so I wouldn’t have to worry about my preschooler potentially discovering the hot stovetop over the several-hour cooking time.

The verdict? Pretty good. Very dark and fruity-tasting. Boozy from the vodka that soaked into the cake before flaming out, and generally moist. It wasn’t nearly as firm as I expected it to be, though– kind of soft with a light crumb, though not in a bad way. I don’t think I’d make it again but I’m glad to have tried it!

* Pedro Ximenez is a variety of grape that is often used to make dessert wines, not a brand name. Just look at the various sweet sherries at your local store and look for the words “Pedro Ximenez” somewhere on the bottle. If you can’t find that particular type of grape, any sweet sherry will do, or maybe a port or sweet Marsala wine. Honestly, PX tastes like liquid raisins and I think I’d have ultimately preferred the more complex flavor of a ruby port, so maybe go with that instead.

1. Put the currants, raisins, and chopped prunes into a bowl with the Pedro Ximénez, swirl the bowl a bit, then cover with plastic wrap and leave to steep at room temperature overnight or for up to 1 week. 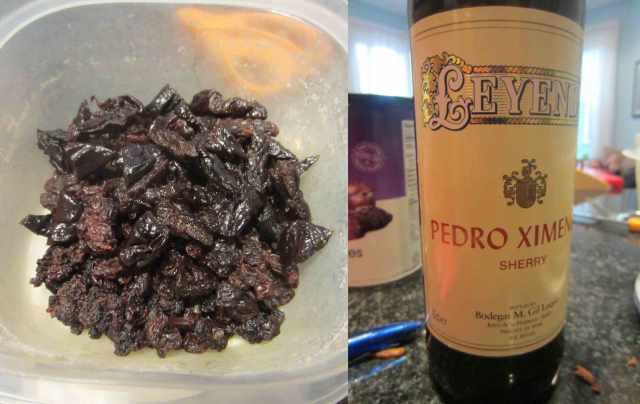 2. When ready to prepare, butter your pudding basin (or in this case, your 4-cup capacity bowl) generously and set aside.

3. In a large mixing bowl, combine all the remaining pudding ingredients except the vodka and stir until completely combined.

4. Add the steeped fruits and mix to combine thoroughly.

5. Scrape the mixture into the prepared pudding basin and press it down firmly.

6. Cover the bowl tightly with a layer of parchment paper and a layer of aluminum foil, and tie tightly with twine (or a rubber band), doing your best to make a water-tight seal. Put more foil on top if necessary.

8. Place the pudding bowl into the slow-cooker and pour the water in until it reaches halfway up the side of the pudding bowl. Set the cooker to low heat, cover, and cook for 5 hours. Your cooker should be hot enough that your water keeps bubbling the entire time on the Low setting. If it’s not, set it on High. 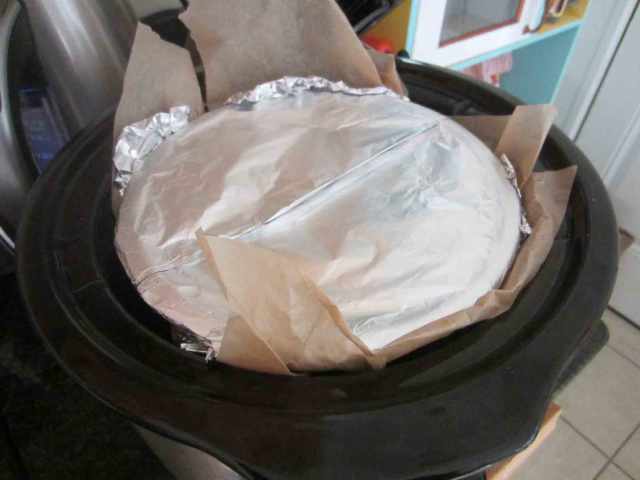 9. Carefully remove the pudding and let cool to room temperature. Unwrap the foil and parchment, and replace with a new lid of foil, parchment, and string. Set in a cool, dark place until Christmas (apparently this can keep for weeks without refrigeration). 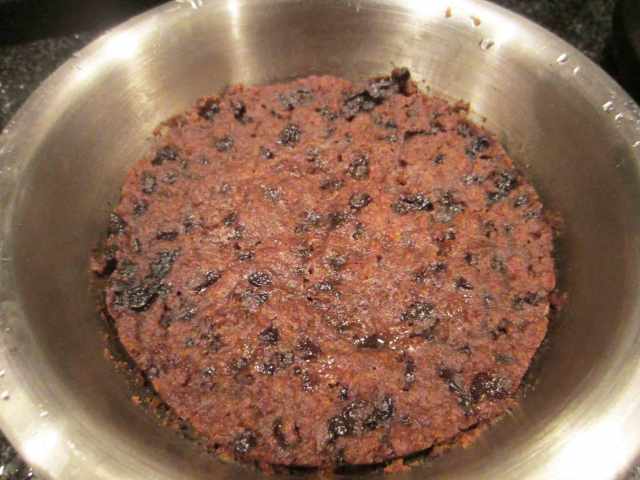 10. On the big day, steam the pudding again in the slow-cooker, this time for 4 hours.

11. To serve, remove from the pan or steamer, take off the lid, put a plate on top, turn it upside down and unmold the pudding. It may help to run a knife around the outside of the pudding first to break the seal. Mine didn’t release completely cleanly, but it was all right.

13. Let the vodka flame out, then serve with eggnog cream.