I started off titling this post just “Ninja Mobile,” but that kept making me picture a ninjamobile– a car filled with ninjas who would drive around and pick fights with bystanders– so I felt the need to clarify.

This crib mobile is a gift for a friend’s baby shower, and is actually the second mobile I’ve made– the first featured corgis and sheep, and I was inspired to make it after paying far too much for an Etsy seller to make a mobile for my own daughter’s nursery. Making your own mobile is easy, though of course you can always complicate matters (at least I can) by planning fancy details.

Basically, the mobile is made of a wooden embroidery hoop, from which you hang various felt ornaments– in this case, ninjas. Then you cover the hoop in felt and hang it from the ceiling. Simple, right?

I bought several colors of wool felt from SweetEmmaJean on Etsy– always get wool, it’s infinitely better than the thin, uneven acrylic stuff you find at the standard craft stores– to make a rainbow of little ninjas to hang from the mobile.

First I made some sketches of cartoony ninjas in different poses, then picked the six I wanted to use– four around the sides, one in the center, and one up top. I traced the templates twice onto my felt (mirror images), then cut them out. Since some of the ninjas had folded arms or other details that weren’t visible in silhouette, I cut out those details (arms, legs) on the top layer only. This made them visible without destroying the integrity of the ninja. 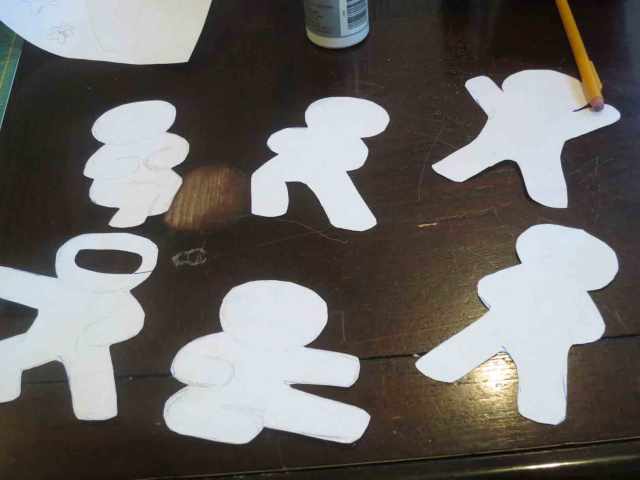 I drew little rounded oblongs of peach-colored fabric to serve as the parts of the ninjas’ faces not covered by their masks. I thought about embroidering their eyes, but I’ve had bad luck trying to make even-looking circles with embroidery thread, so instead I just used black puff paint, very carefully applied.

Anyway, so now I had a bunch of rainbow-colored ninjas that basically looked like gingerbread men. How to add detail? The answer was ribbon. I got a spool of 1/4″ black satin ribbon and one of 1/8″ to go with it. I used the 1/8″ ribbon to make some arm- and leg-wrap details, gluing the ends of the ribbon between the two layers of felt to hold them in place. 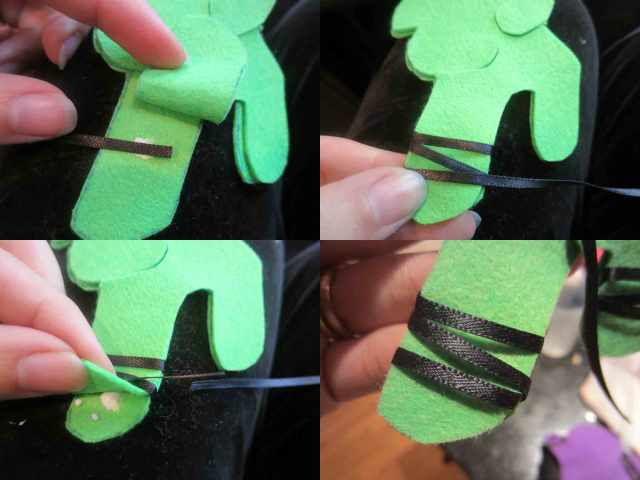 I used the 1/4″ ribbon to tie a little belt onto each ninja, using appropriate knots. I used tiny dots of fabric glue to tack them to the felt, figuring I’d stitch them in place when I finished everything. 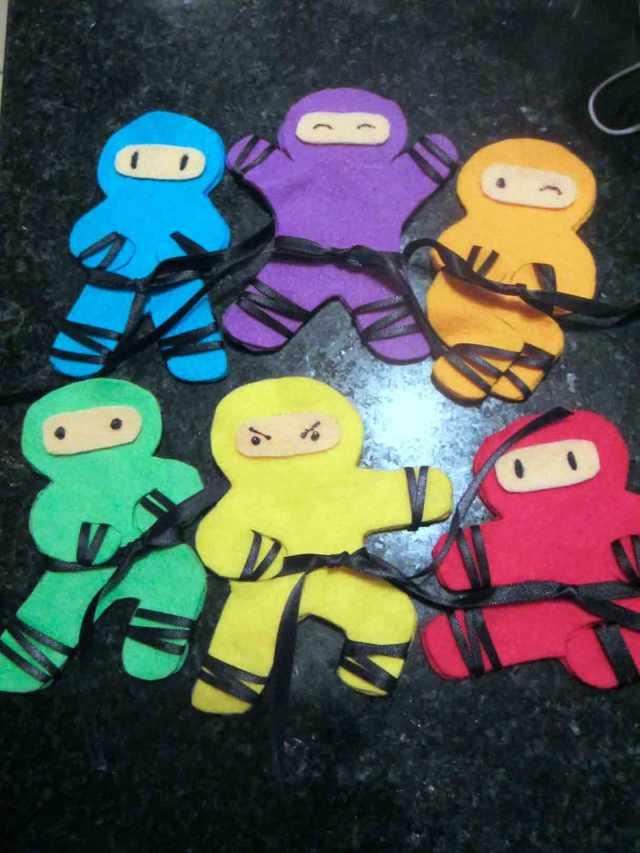 For a few of the ninjas I added weapons– a set of crossed sais made of gray felt, and a katana that I made of two layers of felt sandwiching a twisted wire (to keep it from flopping over), with a thread-wrapped handle. They turned out really cute.

Once the ninjas were structurally complete, I took lengths of cord, knotted them at one end, and put the knotted end between the two layers of felt at the point from which I wanted to hang the ninja. I glued that in too. I will note that I did not do this for the two center ninjas– one was designed to look like it was climbing the cord, so the cord had to be on the outside. The other was designed to be at the top of the mobile, so I wouldn’t hang it at all.

Once the hanging cords were in, I tied headbands onto the ninjas and glued them in place.

Finally, I took embroidery thread matching the color of each ninja (except the top one), and whipstitched all around the edges, making sure to catch the ribbon details as they came along, and ensuring that the knotted cord stayed in place. 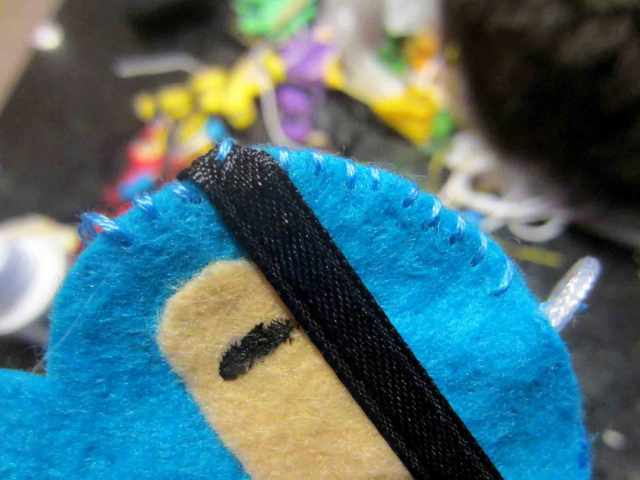 For the base of the mobile I used the inner circle of a 14″ wooden embroidery hoop, and tied the dangling ninjas around it at equal intervals. I hot-glued the knots to ensure that they’d stay in place. Then I used more cord to make a hanging loop in the center, attached by even lengths of cord to the hoop. Once that was in place I ran the loop between the two pieces of my last ninja, glued it in place, then whipstitched the last ninja like the others. 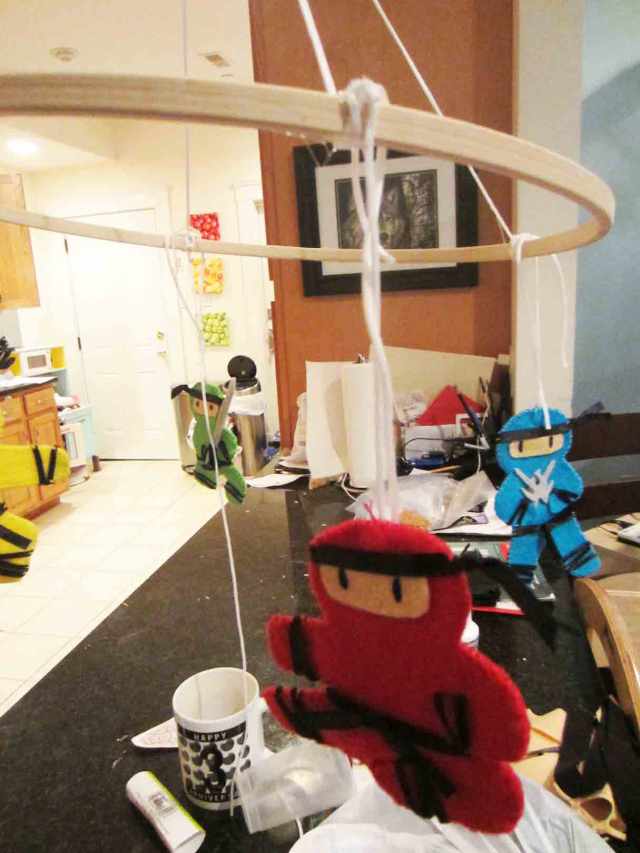 To cover the hoop I cut 1″ wide strips of black felt for the inside and outside of the hoop, and whipstitched them together with black thread over the wood. I left space between the stitches for the cord where appropriate.

Of course, the mobile looked a little bare with just the ninjas, so I cut out some colorful dots and some little “POW!” and “BAM!” balloons (red puff paint over yellow felt) to attach at various points to the cord– I just made two of each piece and sandwiched them with fabric glue over the cord. They added visual interest and worked with the theme.

One thought on “Ninja Crib Mobile”