While I was in Paris for my breadbaking course, I made a point of visiting famous pastry shops (okay, not just famous ones) and picking out the most delectable-looking desserts to enjoy, regardless of cost or calories. After all, it’s not every day one is in Paris and able to experience all of the delicious things the city has to offer! And one of the most important delicious things on my list was the Ispahan macaron at Pierre Herme.

The Ispahan is a dessert made of two pink macaron shells, sandwiching fresh raspberries, lychees, and a rose buttercream. The combination of flavors was perfect. Absolutely perfect. It was an exquisitely balanced meld of sweet and floral and fruity, with creamy and crispy and juicy textures in each bite… I just can’t do it justice with mere words. A perfect dessert. This from a woman who usually goes for chocolate, chocolate, chocolate. I knew I had to recreate it here at home.

I’ll get to a perfect reproduction later, but until then I’m just trying to get the general flavor profile right. I decided to start with panna cotta, figuring that it’s light and creamy, doesn’t have egg yolks or butter to disguise the delicate flavors of rose and lychee, and is simple enough that I wouldn’t feel bad about wasting tons of time and effort if it didn’t turn out well.

Since my review of the Pierre Herme original recipe showed that he used canned lychees and rose syrup (rather than fresh lychees or rose water), I bought both to use in my first try at the Ispahan. Then (and maybe this is a backward way of doing things) I searched online for panna cotta recipes that used those two ingredients, so I could be sure that things would work properly in both recipes without my having to buy two sets of ingredients.

The dessert consists of a vanilla-rose panna cotta, poured over lychees and fresh raspberries, and topped with a drizzle of rose syrup.

1. Combine the cream and milk in a saucepan and bring to boil. Remove from heat, stir in the vanilla extract, and cover for 5 minutes. (if you’re using a vanilla bean, scrape the pod into the milk before heating)

2. Sprinkle the gelatin over the water in a small bowl and let sit for 5 minutes. 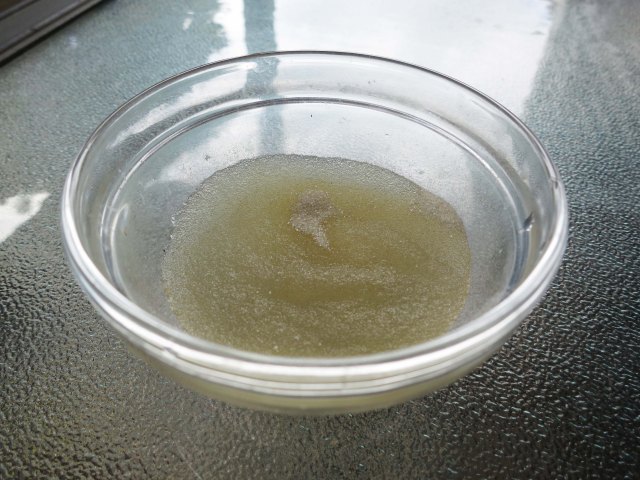 3. Stir the bloomed gelatin, sugar, and rose syrup into the cream mixture until the gelatin is fully melted. Let the mixture sit for at least another 10-15 minutes at room temperature before giving it a final stir and moving on to the next step. This is important– if the mixture is too hot when you pour, it’ll separate as it cools. You’re looking for it to be lukewarm, not hot.

4. Place a lychee and a few raspberries into each serving dish. Pour cream mixture over the fruit until almost covered. Refrigerate until firm.

5. Before serving, drizzle a little rose syrup over the panna cotta and garnish with more raspberries and lychees as desired.

Verdict? This dessert is good. It’s creamy, delicate, and floral, and (just as in the original) the raspberries add a nice tang to the flavor profile. It’s beautiful to look at, elegant to serve, and is definitely something I’ll keep in my recipe box for summer dinner parties. BUT (and there’s definitely a “but”)…

It’s missing something. Two (though see my footnote) somethings, really– richness and textural interest. Panna cotta isn’t considered a light and summery dessert for nothing– even all that heavy cream just can’t replace the generous amounts of butter in the original macaron’s buttercream filling. And I hate to say it, but for me it’s almost too delicate to be satisfying as a dessert. Maybe my American palate is too accustomed to “sweet” desserts (I would never order a cheese plate to finish a meal, for example), but I was left wanting something with just a little more “oomph” when I finished mine. It’s not that the dessert as a whole wasn’t sweet enough– the rose syrup on top was plenty sweet– but the panna cotta part wasn’t rich enough to let the sugar linger on the tongue the way a buttercream would, and it made a difference.*

Also, I missed the macaron aspect of the dessert.  The macaron shell really brings something extra to the whole experience– without it the panna cotta and fruit all seem to mush together in one big pudding-y bite. And I realize that’s part and parcel of panna cotta as a dessert, but even adding a thin crispy wafer cookie didn’t really make up for the lack of macaron. Even Pierre Herme adds a macaron shell to his “Emotion Ispahan” (a verrine of white chocolate/rose mousse with raspberry and lychee gelees), presumably for this very reason. But if I’m going to be making macarons already I may as well make the original, no?

Anyway, it was worth trying, and like I said I’ll keep this in my recipe box for when I need to impress someone on relatively short notice. But it can’t replace the original Ispahan.

* Edited to add: I just realized that in making the panna cotta I inadvertently left out the 3 tablespoons of sugar that were supposed to be stirred in along with the rose syrup. It’s entirely possible that the extra sugar would have changed the sweetness level pretty significantly, so I’ll reserve judgment on whether the dessert is actually sweet enough for my tastes. That being said, if you’re not really into sweet desserts feel free to omit the extra sugar in this one, because it’s perfectly good without it, just not quite the same as my personal preference.