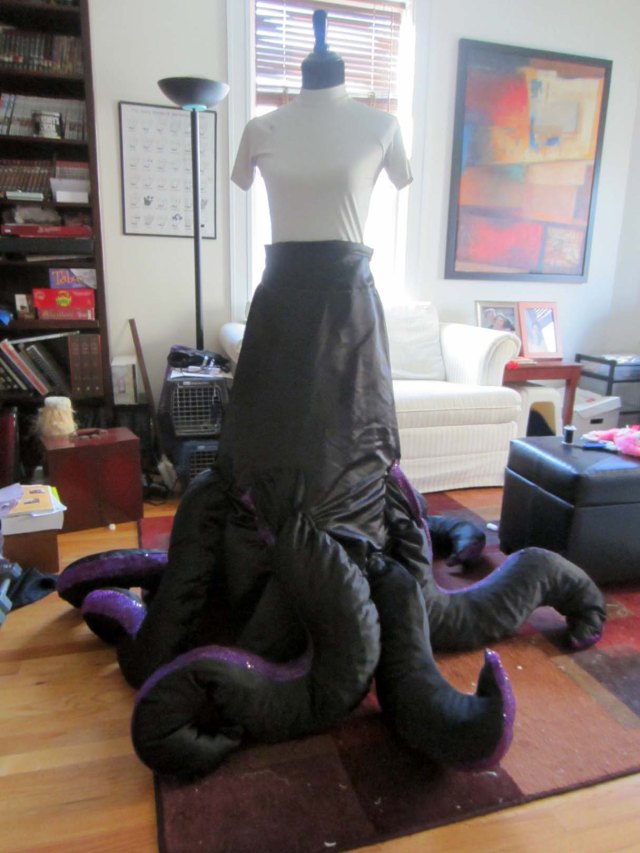 Moving forward, I’ve realized that I’m never going to be able to simultaneously have the dress be attractive and display the tentacles as they’re currently sewn on the underlying skirt. Solution? Move the tentacles.(Warning: the word “tentacles” is used so often in this post that it’s starting to sound weird, even to me)

I permanently installed a narrow hoop skirt inside the tentacle skirt, using the hoop at the bottom to puff out the lower hem enough that it would both give me some space to walk and bring the tentacles out far enough to extend past the hem circumference of the wedding dress. Then I detached all the tentacles and unwound them from each other so I could reposition them on the skirt. I experimented with different placements, trying to figure out how best to display the tentacles on the outside of the dress. I figured that if I brought the ends of the tentacles up over the hem of the wedding dress, they’d be visible but not interfere with the lines of the dress itself.

I pinned the tentacles in place around the black underskirt, arranging them over the white dress to get the best effect. Once they were pinned appropriately, I marked the new hem of the dress and unpinned everything so I could do the final hemming, as well as the pressing and trimming of seams. I wanted to add pockets to the dress (always useful), but the skirt didn’t have side seams and I had to dispense with that idea. 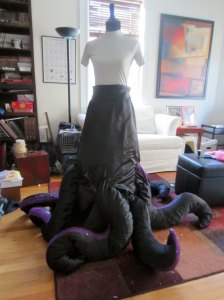 Once the bases were set in place, I put the wedding dress on over the tentacle skirt and sewed the tips of some tentacles directly to the dress with white embroidery floss (stronger than thread), extending the thread through the white fabric and anchoring it to the black satin underskirt and hoop skirt for added support. At each layer of fabric I added a few stitches on a patch of interfacing to strengthen the tension points and prevent anything from ripping due to the weight of the tentacle. Some of the tentacles actually had a “floating” effect, where I let several inches of floss play out between the tentacle and the skirt layers– I was going to use fishing line, but the floss was easier to work with. I used white floss so I could stitch on the surface of the dress invisibly, but then colored the exposed parts black with a permanent marker to make them less visible.

I still need to re-do the center draping panel and the skirt ruffles before I can attach the last two tentacles, but since I’ve already done it once it shouldn’t be too tough to do it again (knock wood). Here’s a picture of the current state of the dress: 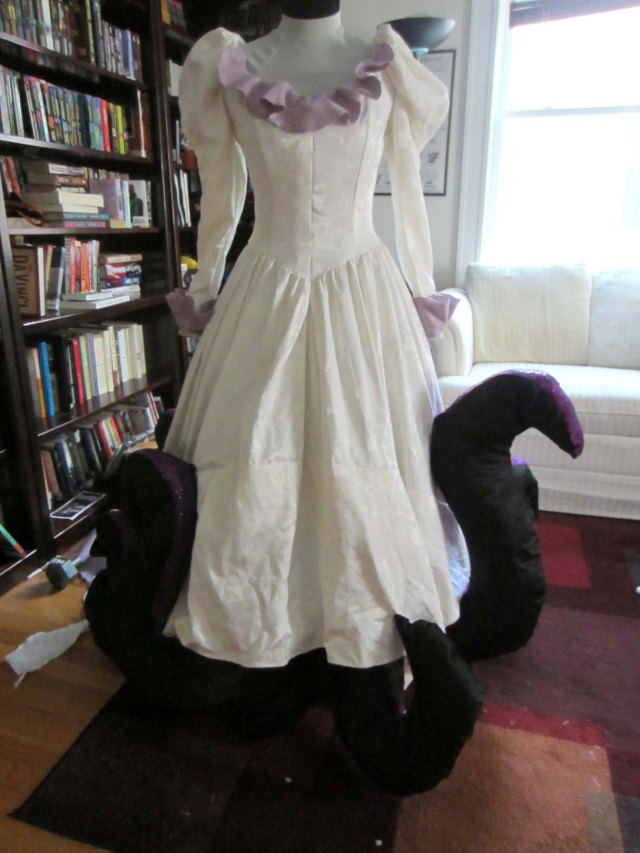 CORRECTION: this is a photo of the dress with the tentacles pinned before attaching– I forgot to take a picture of the dress in its current state. More photos in the next post.