You know how some days, you just have a craving for dessert– something rich, something decadent, something better than the stale graham crackers you have in the back of your pantry– but there’s NOTHING in the house? I was having one of those days recently– my husband had eaten the last of the ice cream, I had used up my bag of frozen cake scraps in a recipe, and I hadn’t gotten around to buying any Thin Mints to stash in the freezer yet– so I turned to my archive of recipes I’d bookmarked but never tried. And there it was. Simple. Elegant. I can’t believe it took me so long to make it, but as god is my witness, it is never sinking into obscurity again.

One-Ingredient Chocolate Mousse. And (no surprise here), the one ingredient is chocolate. Because water doesn’t really count as an ingredient, of course. It couldn’t be simpler. It took me less than 10 minutes to make (and eat), and there was no tedious waiting for the finished product to chill and set in the fridge. Melt. Whip. Eat. That’s it. It’s like instant chocolate pudding on steroids.

Here’s the recipe (if you can even call it that):

Take 4 ounces of chocolate. I used semisweet chocolate chips. You can use whatever you want, though I would caution against going much darker than that– since there’s no dairy or extra fat to cut the acidity you might not like the result.

Empty a tray of ice cubes into a large mixing bowl. They should cover the bottom of the bowl. Nest a smaller metal mixing bowl inside, touching the ice cubes. Pour your melted chocolate mixture into the smaller bowl, and use an electric mixer to whip until thick (abut 3 minutes). It should look like frosting. Don’t overwhip or it’ll be grainy. 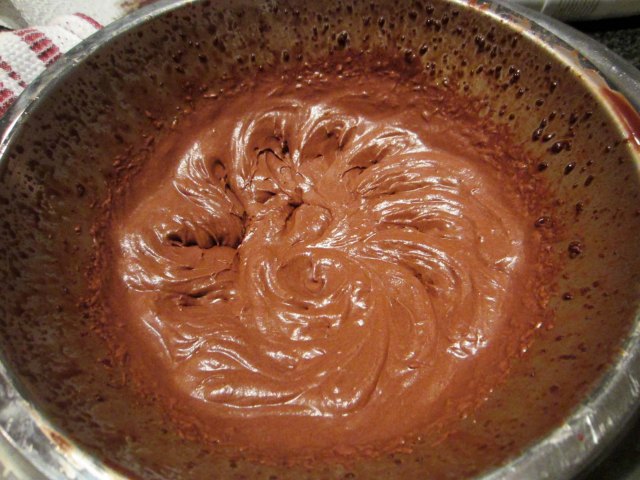 And that’s it. You’re done. Spoon into dessert bowls (or directly your mouth). This makes 2 small servings, and trust me, you won’t need any more than that small serving. It’s that chocolate-y. How could it be anything else?

The best part about this recipe (other than how fast and easy it is to make) is how light and airy it is. It doesn’t feel at all heavy, or even too rich, the way many mousses do. It’s not even what I’d call “fluffy,” because that word, to me, implies some substance, kind of like a marshmallow. No, this stuff just melts away in your mouth, leaving nothing behind but an intense chocolate flavor.

I’m told you can store this in the refrigerator, but personally I haven’t tried– too busy eating. So definitely try this one. You’ll thank me later.

*UPDATE 3/8/15: For some reason, this does not work with milk chocolate chips, only semisweet. It just never thickens up. However, I did try chilling a serving of the semisweet overnight, it not only firms up nicely (much more like regular mousse in texture) but also mellows out just a bit in flavor so you don’t get the touch of acidity of bittersweet the way you do when it’s fresh. I prefer it after chilling. Next up, trying with milk!

1. I admit that I’m considering trying this using milk or coffee, or adding a splash of liqueur, but for now I’m just in love with the simplicity of it all. I’ll update if I try other variations.

2. The original recipe noted that if you accidentally overwhip, you can just re-melt and try again. I assume this means that there is no “seizing” going on in the whipping process, by which I mean the ugly, ugly, irreversible result that you usually get when you mix melted chocolate with small amounts of water. This is a comforting thought.

3. You really do need to use a metal mixing bowl for the actual mousse vessel– if it’s not metal, it won’t conduct heat as well, and the ice won’t chill it as effectively.